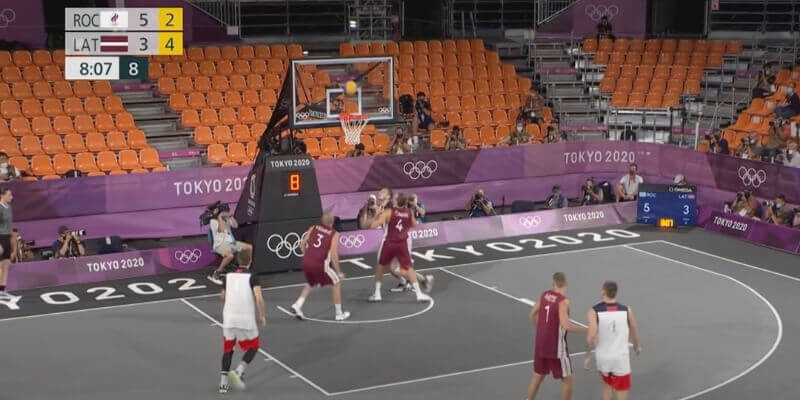 Playing the game of basketball is a blast! If you can’t play basketball the traditional way – 5-on-5 full-court – though, there are several alternatives. Playing 3×3 (or 3-on-3 as it is often referred to) is a worthy option if you don’t have enough people, or a full-court, for a game.

You may have seen 3×3 being played before. Maybe you tuned into a Big3 game and loved the half-court style of play. 3×3 is still basketball, but the rules are a bit different.

Let’s break down 3×3 basketball in its entirety so next time you have 6 people and a half-court to work with, you can start up a game.

While most 3×3 games aren’t affiliated with any league or professional entity, the history of 3×3 does include some organized moments. In 2017, FIBA added 3×3 basketball as a recognized Olympic sport.

There are more recognizable “playground” versions of 3×3 as well with the Gus Macker and Hoop It Up tournaments held across the country.

Growing up playing competitive basketball in the late-’90s, I was a part of both tournaments. I was able to watch local and state-wide Division 1 athletes play a brand of basketball that differed from their high school teams. While some teams bring a coach, the game is more freestyle than an organized high school-coached team.

But I digress. Official 3×3 rules didn’t take hold until tournaments like Macker and Hoop It Up originated. After these tournaments gained popularity, leagues with more exposure, like the Big3, took this version of the game to broadcast television.

Prior to this, 3×3 was mainly governed by the 6 people playing in the game. There were street rules, but nothing was documented. Those rules weren’t officiated and were often the cause of many an argument among players.

This article will cover both sets of rules – street and official – and highlight why it is people choose to play 3×3 in organized events.

Disclaimer: These rules are subject to change depending on who you play with! Street rules can cause arguments among players that can often only be settled by a shoot-off from three-point range!

A 3×3 game can be started by anyone, at any time, who has a ball, hoop, and 5 other willing people. Many of the rules of 3×3 follow general basketball rules – out of bounds is still out of bounds, a foul is a foul, and the list goes on and on – but 3×3 does have specific distinctions from 5×5.

Street basketball in any form can be a lot of fun. It mixes competition and exercise and could give you bragging rights over your friends if you come out on top. The fun that 3×3 games bring have been noticed, which is why leagues are started to showcase this iteration of the sport. Let’s cover those leagues now, and see how their rules differ from the streets.

The Big3 has gained popularity since its inception in 2017. Their league is much more structured than street 3×3. Here are the biggest rule differences that the Big3 employs while still keeping the essence of street 3×3 basketball intact.

As the rest of the world’s premier 3×3 league, the FIBA World Tour (and the FIBA World Cup) differs slightly from the Big3. Even though the Big3 gained most of its regulatory inspiration from them.

3×3 is a bit more complex with its rulebooks, but these rules make up the gist of it! No matter what type of rules you follow, though, 3×3 basketball makes for a fun game.

The leagues that play 3×3 basketball have created ample followings amongst fans. These exciting rules and variations of the game of basketball are a big part of the intrigue.

The basketball played in 3×3 and 5×5 have a lot of similarities. The differences, however, are what make each league unique.

Have you had fun playing 3×3 basketball in the past? Let us know about your experiences in the comments section below!