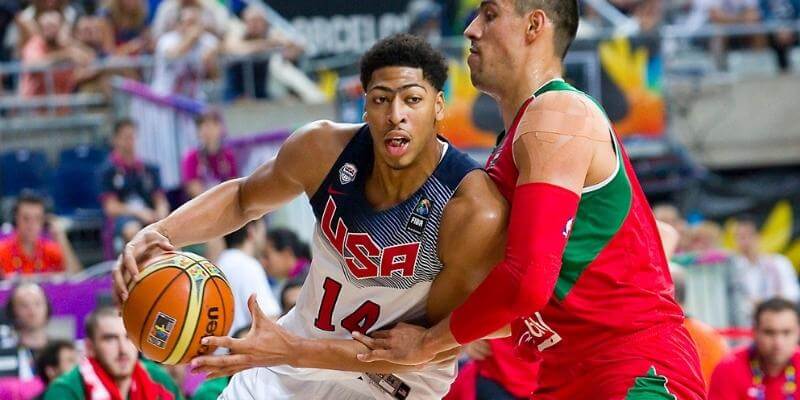 The 2021-22 season is almost upon us, and the Los Angeles Lakers are poised for another title run. That is, of course, if all of their players stay healthy.

LA boasts the oldest average age for a team going into the season at 30.9 years of age. However, the player they will be monitoring closest – all-star big man Anthony Davis – is still in his prime.

Why are they keeping such a close eye on Davis? On top of the fact that he is a generational talent, his injury history has been spotty.

In this article, we will take a look at Davis’, or AD as he is often referred to, rise in the league and the injury bug that has plagued him since the beginning of his career.

Anthony Davis: Career At A Glance

Anthony Davis grew up playing basketball on the South Side of Chicago. Unlike most five-star talents, Davis attended unknown Perspectives Charter School. Throughout his high school career, Perspectives held a losing record.

In an effort to get noticed easier, most of the nation’s top talent transfers to a high school power. Davis, however, remained loyal to his school and played on a bad team for three years. That didn’t stop his production though as he averaged 32 points, 22 rebounds, and 7 blocks his senior season. This garnered interest from big-time programs like Kentucky, Ohio State, and Syracuse.

Davis ended up choosing the University of Kentucky where he went on to win the national title his freshman year. Not only did he win the title, but he was showered with almost every major award. He won SEC layer of the Year, SEC Freshman of the Year, and SEC Defensive Player of the Year. He got national recognition too, taking home the Naismith Award for the nation’s best player.

Davis had literally accomplished everything in one year and decided to head to the NBA at the age of 19. Davis was selected first overall to the New Orleans Hornets (now the New Orleans Pelicans).

Davis’ first game in the league, he scored 21 points in a losing effort. In his second game, an event that may have foreshadowed his injury problems, AD suffered a concussion and missed a week of action.

Davis quickly became one of the league’s premier young talents. He made his first All-Star appearance in only his second year, averaging 20 points, 10 rebounds, and almost 3 blocks.

Davis’ point and rebound totals improved in his first six seasons, although the Pelicans – the team changed their name in year two of Davis’ career – never really showed promise. They did make the playoffs in 2015 but lost in the First Round.

After seven seasons in New Orleans, Davis clumsily forced his way out burning bridges in the process. None of that mattered once he was out, as he was onto bigger and better things: Los Angeles to team with this generation’s GOAT, LeBron James.

AD’s first year in LA proved that he made the right move leaving New Orleans. The Lakers won the NBA title behind James’ and AD’s leadership. Davis’ second year in LA ended in injury (see a trend?), which leads us to year 10 of Davis’ career. He is now 28 years old, a middle-aged player but by no means old.

What will the rest of Davis’ career bring? Well, if his injury past shows us anything, the chance of him missing time in the future is pretty high.

Concussion: As we mentioned, Davis suffered a concussion and missed a week of the season.

Stress Reaction – Left Ankle: Just weeks into his rookie year, Davis injured his ankle and missed 11 games. Davis would end his rookie year playing in just 64 games out of 82.

Fractured Left Hand: In a December matchup against the Knicks, Davis hurt his hand. He missed seven games.

Back Spasms: An injury that would plague Davis even today kept him out of the last five games of the 2013-14 season.

Sprained Shoulder: AD missed five games because of his shoulder.

Sprained Ankle: Davis missed a couple of games with another ankle injury in March of 2015.

Bruised Hip: Another lingering injury that sat him out for a couple of games late in the season.

Back Injury: Just three minutes into a game against the Indiana Pacers, Davis suffered a back injury that sidelined him for three games.

Knee/Shoulder: Davis missed the last 14 games of 2015-16 with a combination of knee and shoulder issues. The Pelicans were nowhere close to playoff contention making the decision to sit Davis an easy one.

Davis stayed on the court for the better part of two seasons from 2016 through 2018. He had great statistical seasons both years and competed for league MVP in both years.

Strained Groin: The same groin that gave AD problems last year in LA made for a rough week in 2017. He actually had to be wheelchaired off the court for the injury and ended up missing a week.

Finger Sprain: Davis was in his last season in New Orleans when he sprained his finger. He missed nine games with the injury over the span of three weeks.

Contusion: Davis stayed relatively healthy in his championship season with the Lakers. The months-long break due to COVID and shortened games probably helped him stay rested as well.

Calf/Achilles Injury: The team was extremely careful with both Davis and LeBron last season, which is why AD missed so much time. The team flamed out in the first round of the playoffs and Davis didn’t play.

As you can see by the extensive injury timeline above, Anthony Davis isn’t the reliable stalwart Lakers (and Pelicans before them) fans hoped for. He is a generational talent with an affinity for bumps and bruises along the way. To some, Davis is too soft albeit extremely talented. To others – the “glass-half-full” group – Davis is unlucky.

NBA basketball is a tough occupation. When your season lasts up to 9 months, if you make a deep playoff run, your mind and body can break down. Davis has already played in over 500 games for his career. He is closer to 30 than he is to 25, and at the pace that the league plays, the injury bug is always right around the corner for AD.

AD fans! What are your thoughts about his injury history? Let us know in the comments section below!