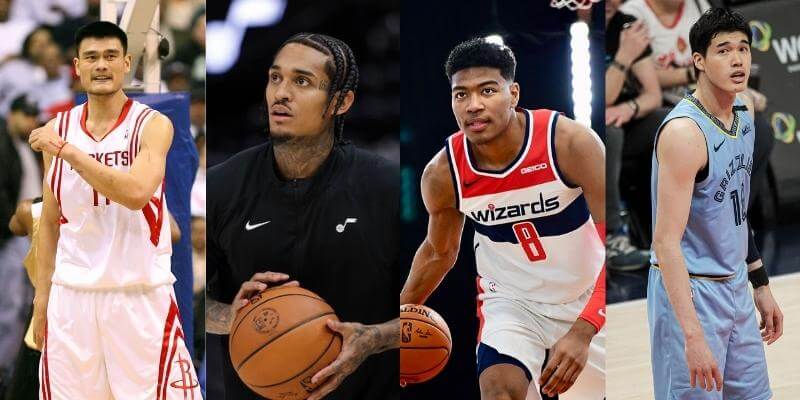 While Asian basketball players represent only 0.4% of the total past and present NBA pool, their legacy deserves coverage.

And, because the world in which we live is so diverse, the term Asian covers a large swath of athletes. Past stereotypes can be thrown out the window when we discuss current players in the NBA who come from an Asian background.

This article will cover the current Asian NBA players in the league and rank them top to bottom. We will look at the Asian GOAT, Yao Ming, and how his time in the NBA shaped the league, and how it considered Asian players for future opportunities.

So, stay tuned, while we uncover a rock that has gone unnoticed for too long in the NBA.

Look no further than Sixth-Man extraordinaire to top this list. The Filipino-American hooper enjoyed successful stints at Tulsa and Missouri before being drafted by the LA Lakers in 2014. In his eighth season currently, Clarkson has scored in double digits every single year of his career thus far.

Although he was born in the States, Clarkson is proud of his Filipino heritage that stems from his mother’s side. “Being around my grandma and mom is where I get most of my Filipino background,” stated Clarkson in an interview as a rookie.

Clarkson has made waves since his rookie season, making the All-Rookie team. After three and a half seasons with LA – where Clarkson was pivotal to their bench scoring – he was moved to the Cleveland Cavs. After two seasons in Cleveland, Clarkson landed in Utah and has enjoyed success on one of the Western Conference’s top contenders.

Clarkson is Mr. Consistent when it comes to getting buckets and hopes to continue his play in hopes of winning an NBA title before all is said and done.

As the second-ever Japanese-born player to sign an NBA contract, Hachimura has shown signs of greatness in less than two full NBA seasons. Hachimura was born in Japan to his Japanese mother and Beninese father. He lived his entire childhood and adolescence in Japan until he left for Gonzaga to play ball for the Bulldogs.

Rui had a good college career, winning WCC Player of the Year in his junior season. He skipped his senior campaign and was selected ninth overall by the Wizards in the 2019 NBA Draft. There are countless articles online asking the question about just how good Rui Hachimura can be but the injury bug has bitten him early in his career.

Even though he hasn’t reached his full potential on the court, Hachimura’s early stats – almost 14 points and 6 rebounds per game – are promising. And, as the first-ever Japanese-born player to be drafted in the first round, Hachimura is repping his home country every time he steps on the court.

Yuta Watanabe entered the NBA in 2018 as a polished product. In 2013, at the age of 18, The Japanese-born Watanabe had already played for the Japanese National Basketball team against grown men. He became the first-ever Japanese-born player to earn a Division 1 scholarship when he chose to play college ball at George Washington.

After four years at GW – where he averaged 16 points his senior season and won the Atlantic-10 Defensive Player of the Year Award – Watanabe decided to pursue a career in the NBA. His dreams were quelled initially when he went undrafted but were boosted again after he signed a two-way contract with the Memphis Grizzlies. The Grizzlies saw Yuta play well in the Summer League with the Nets and gave him a chance.

Yuta spent two shortened seasons (he only played 33 games in two years) with Memphis before joining the Raptors. Watanabe is getting more burn in Toronto, averaging 15 minutes per game and scoring around 5 points per contest. While Yuta is still young, there is no doubt he ranks third behind Clarkson and Hachimura due to the small sample size.

Many were skeptical when Yao Ming entered the league in 2002. There wasn’t much footage but the 7’6” Chinese basketball player was rumored to be a star in the making.

Prior to his NBA career, Ming excelled for the Shanghai Sharks, putting up absurd numbers on the court. In one playoff series, Ming averaged 38.9 PPG and 20 RPG on 76% shooting.

His undeniable career led him to Houston, who had the first pick in the 2002 NBA Draft. They selected Yao and the rest was history. Yao Ming had it all on the court. He had great footwork and post moves which made him unstoppable when you account for his height and strength.

Shaquille O’Neal remembers one of his first matchups with Yao and couldn’t believe how big he was. “He shot a fadeaway on me once and I jumped as high as could and he still had about three feet on me. I thought ‘man this dude is tall!’”

Ming made the All-Star team in every season he played as Houston was always in NBA Finals contention behind he and Tracy McGrady’s leadership. He was deservedly selected for the Basketball Hall of Fame in 2016 alongside other players – Shaquille O’Neal and Allen Iverson – who shaped the league for a generation.

Although Yao reached the league’s heights – All-Star teams and being inducted in the Hall of Fame – we never saw his full potential. His best season – the 2006-07 season – in the league he averaged 25 points and 9 rebounds on an injured foot. Yao only played 48 games that season and, while he bounced back a little in the following years, he was never the same.

Yao Ming will always be remembered as the mysterious Chinese-born hooper who took the NBA by storm and revolutionized the big man position.

Yao is a renaissance man, enrolling in college after he retired from the league to earn his degree in Economics and Management. He opened a winery in California to produce some of the highest-rated Cabernets in the state. He is also a big philanthropist and held political office in China for five years after basketball.

Basketball players of Asian descent are on the cusp of becoming more prevalent in the NBA as is seen by the stellar play of current players like Jordan Clarkson and Rui Hachimura. Clarkson is the cream of the crop so far, but future generations are seeing the barriers broken and will surely compete for future NBA accolades.

After the footprints were largely paved by NBA great, Yao Ming, the sky is the limit for Asian basketball players to become a bigger chapter in the NBA’s rich global history.

Were you aware of the impact Asian players have made in the league before this article? Let us know in the comments below!