What is The Baseline in Basketball? 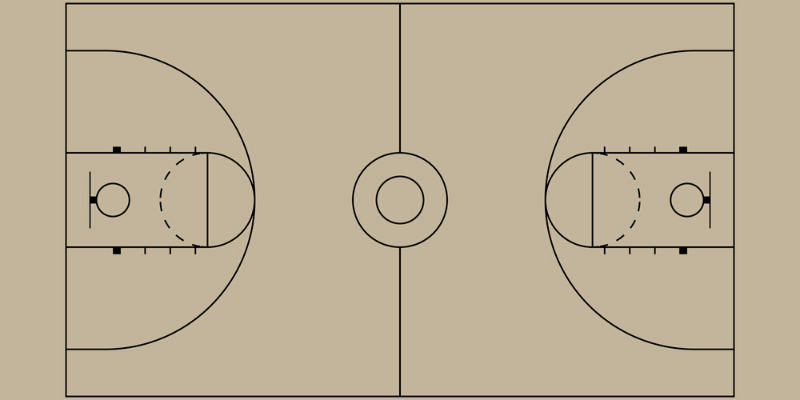 Knowing the parts of the basketball court is important in order to better understand the game and how it should be played. While it’s not as important for fans, it helps to stay informed on what everyone is talking about when they use terms like, the lane, the paint, the ten-second line or the baseline. These terms and parts of the court are crucial things about the game of basketball and how the game is played.

The baseline or end line, as it is sometimes called, plays a significant role on the basketball court. Not only does it provide a boundary on the floor, but it is often used strategically by both offenses and defenses.

You have probably heard commentators talk about a play on the baseline or describing a player driving the baseline. This is a very common area of the court. If you are a little unsure of what it means, no worries, let’s take a look at what it is, where it is, and how it is utilized by teams during a game.

The baseline is the boundary at the end of both sides of the court and is the out of bounds line behind each basket. It extends from sideline to sideline. The line is 4 feet behind the backboard and its length is the same as the width of the court which is normally 50 feet (15.24 meters).

Take a look at the diagram below. 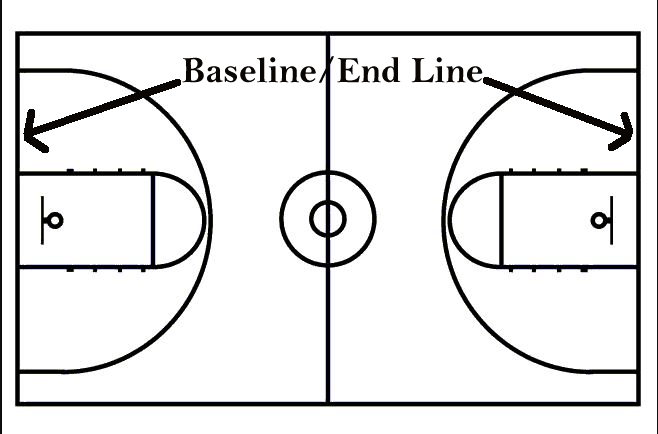 Location of Baseline/End line on the court.

The baseline and end line along with the two sidelines are the boundaries of a basketball court. If the ball or a player with possession of it, touches any of these lines, either by having any part of their body touch it or the ball touch it while they have possession, it is considered “out of bounds” and the ball is turned over to the other team.

Any “out of bounds call” on the baseline, results in the other team getting the ball for an attempt to inbound (pass from outside of the boundary) the ball under the basket. The ball is given to the player by the referee near the area where the ball or player went out of bounds. The inbounding player has 5 seconds to get the ball in and is not allowed to move their feet until they release the pass.

The end line is also important after made baskets. When the team on offense scores, the opposing team must take the ball from out of bounds behind the end line. For this inbound situation, there is no need for the referee to hand the ball to the player. The player can simply take the ball behind the line and throw it in.

After the opposing team scores, the inbounder can move as much as they want along the line as long as they do not cross it. At this point, a player may even pass it to another player who is out of bounds behind the end line as long as the ball is put into play within 5 seconds. Players must be careful to avoid hitting the back of the backboard while throwing in the ball. If they do, it is considered out of bounds and possession goes to the other team.

Tossing the ball into play at the baseline or end line may seem like a simple task. It usually is, but the opposing team will often defend tightly any inbound passes under the basket because they can lead to quick scores.

When putting the ball into play from your end line, the defense may also choose to play a full-court press which can make inbounding quite difficult. Because of this, teams usually have plays designed to help get the ball in play.

Aside from game rules and plays to get the ball inbounds, the baseline may also be used for some general strategies of play for both offenses and defenses. On defense, there are often debates between coaches about the use of this area of the court and what methods work best. Some prefer to “force baseline”, while others prefer to “force middle”.

This method of defense uses the baseline as a sort of “6th defender”. This is possible because the boundary never moves and a player with the ball is unable to go by it. Using this strategy, the defense “forces” the player with the ball to move down the sideline and towards the corner of the court.

The defender on the ball must then “cut off” the baseline by getting there first and having their feet in position so that the player with the ball can not get between them and the line. The defender and the baseline form “walls” around the offensive player making it more difficult to get around their defender. As this is taking place, the rest of the defense rotates around and traps the offensive player in the corner area.

For this method, the defense forces the offensive player to the middle of the court or the paint. The idea here is that the entire defense can surround them and cut off any pass or block any shot they may attempt. This strategy works well if your defense has a quality shot blocker to defend the rim.

The drawback to this is that many offenses are designed to get into the paint to provide a better chance of scoring, so this can often backfire. If a defense does not defend the baseline, the offense can take advantage and get easy buckets. Baseline cuts, backdoor cuts, and baseline screens can all lead to open shots.

This is a move a player makes to get open along the baseline and usually leads to a layup or an open 3 point shot. Former NBA player Dwayne Wade was a master at this. Take a look at this compilation video of him and his killer cuts.

A backdoor cut is made when a player fakes a move in one direction, frequently towards the ball handler, then plants their feet and cuts the other direction behind the defender’s back, frequently towards the basket. If done right it can leave the player wide open and if used on the baseline it usually leads to quick points. Take a look at this video to see some of these types of backdoor cuts.

This is a type of screen set near the baseline that can also lead to easy buckets. An offensive player sets a pick or screen near the baseline and their teammate runs between the screen and the line, shedding their defender and leaving them open for a basket. Here you can see a good explanation of this type of play.

The baseline or end line on a basketball court is more than just a boundary. It is a strategic area where big plays are often made and games are potentially won. Effective play in this area may just determine the outcome of a game.

What other NBA players are great at playing on the baseline? We’d love to hear from you in the comments section below!