How to Do a Crossover in Basketball? 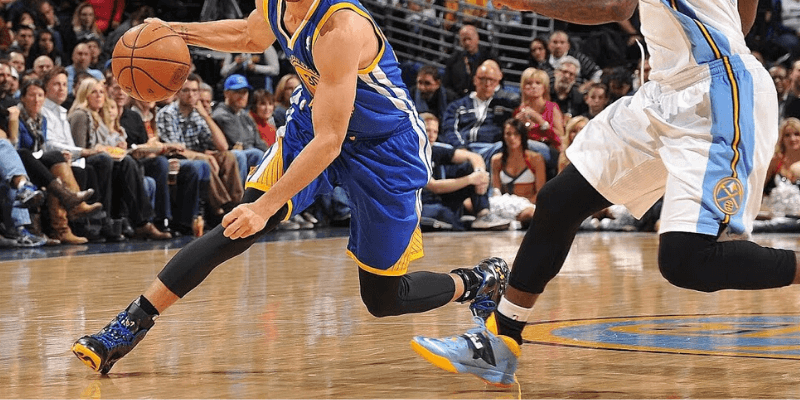 The crossover dribble, if done correctly, can be one of the most devastating moves in basketball. The simplicity of the move is what makes it so accessible to basketball players at any level but the best crossovers are done with equal parts quickness, technique, and a hint of the element of surprise.

The crossover dribble is essentially switching dribbling hands in mid-move so it isn’t rocket science. But it is usually the setup move or moves that accompany the crossover that turns a so-so one into an ankle breaker. Did I just call a good crossover an “ankle breaker”? (more on that in a minute)

If you are a new hooper or if you have been playing your whole life but looking to perfect the crossover, then this article is for all of you. This piece will instruct you on some key ingredients in constructing the perfect crossover, we will link you to some great online tutorials on the essence of an effective crossover, and we will check out NBA players, past and present, with signature crossover skills.

The idea of a basketball move breaking the ankles of an opposing player is a bit far-fetched but when you see crossovers like these, you can see why the nickname is so fitting within its context.

If a friend of yours is describing to you a crossover move he or she pulled off in a game they may say that they had their defender on roller skates. If you have ever seen someone on rollerskates that shouldn’t be on them, then you can picture this visual in a basketball game. But if you can’t, here’s a great example of someone doing just that.

This one is a bit more subjective than the ankle breaker or roller skate terms. For the first two, you can visualize the idea of someone breaking an ankle or looking silly on roller skates while defending someone. Getting “shook” is just that, someone shaking you out of your jersey due to a crossover. Speaking of getting shook, here is the greatest player in the world, LeBron James, getting shook by Steph Curry a few years back.

How to Do a Crossover

As I said earlier in the piece, the perfect crossover combines several different aspects and is really based on the timing of the move and the positioning of your defender when you make it. The beauty of a crossover is that there are so many different variations of the same move. This video that shows the best crossovers of the past decade epitomizes the vast differences in the move from play to play.

Certain players lean on specific crossovers more than others and some are more versatile with their crossover moves but at the end of the day, players have to feel where their defender is, what their footwork looks like when the player is planning on performing the crossover, and how well you can fake them out with your counter-move beforehand.

The counter-move is probably more important than the actual crossover because the key to crossing someone over is the get them either leaning one way or somehow off-balance and then quickly crossing the ball and making a move the opposite direction. Let’s break down the basics of the crossover and then go into some of the counter-moves you could incorporate to make the move most effective.

That is the crossover in its most basic explanation. Now to discuss some of the best counter-moves you can use to set your defender up for the ankle-breaker:

The speed dribble is when you put your head down and dribble the ball fast in a straight line. If you use the speed dribble, you will read your defender and once they are running in one direction you will stop on a dime and cross the ball over, heading in the opposite direction.

Just like the speed dribble, you will dribble the ball between your legs and once the defender bites on that move quickly cross the ball over to the other hand and head in that direction.

The in-and-out dribble is tricky to pull off but a great move for any player’s arsenal if done right, can be your new favorite finishing move when playing basketball. You start by using one hand to push the ball to the middle of your body and then bring the ball back to the same side as the hand you are dribbling. Once the ball is back on that side of your body, and with the defender biting on the fake, you can complete the crossover.

The Best of the Best: Players with the Best Crossovers

As I said earlier, some are better at the crossover than others. Here are three of the best among NBA circles and also some of my favorites. You will note that each player approaches their crossovers differently and that is the beauty of the move. Let’s dive right in!

With a signature move dubbed the “Killer Crossover” it’s hard to keep Hardaway off this list. Hardaway was a small guard that starred for the Golden State Warriors and Miami Heat during his career, which consisted of many highlights of him breaking defenders’ ankles with his crossover move. He liked first going between his legs and, if the defender bit on the fake, would leave them in the dust with his crossover.

Iverson had sick handle and was fearless with the ball his entire career. Just check out the thirty-second mark of the above video that shows Iverson as a rookie crossing over the GOAT Michael Jordan like he had done it a million times before. Iverson’s move involved a higher dribble which drove fundamental coaches nuts when players tried to emulate it. But it worked for A.I. because of his quickness and ability to get his defenders off-balance.

The crossover is a great offensive move for any level basketball player to master. I would suggest that is the first move you do master because the variations from that move are infinite. Remember, anyone can master a crossover, no matter how fast you are. The most important thing about the move is that you set up your defender beforehand and explode after your crossover and you can execute it on even the best opponent.

Are you a student of the crossover? If so, who is your favorite crossover specialist? Let us know in the comments!