Why Does NCAA Have Two Halves While NBA Has Four Quarters? 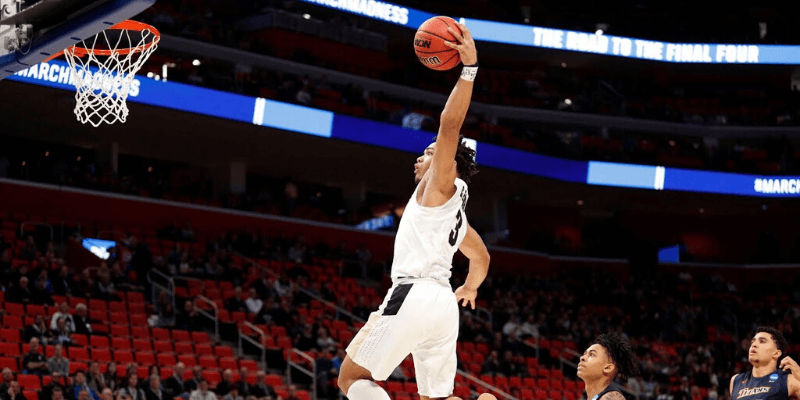 There is no doubt that the NBA and NCAA are two different organizations. College basketball has many quirky rules that the NBA does not follow, while the NBA enforces a few restrictions that do not fly in college.

While there are many discrepancies in each league, the most obvious is the fact that professional basketball is played in four quarters while college is played across two halves. In order to understand why that is, we must dive into the history of both sports, what their rules look like, and how they each developed.

At the end of the day, the NBA and NCAA use time in roughly the same way. The NBA has four 12 minute quarters (48 minutes in total) and the NCAA goes with two 20-minute halves (40 minutes in total). FIBA also uses four 10 minutes quarters to perfectly match the NCAA’s total time.

So, going back to the question at hand, why does that difference exist?

The answer lies in basketball’s original ruleset. Dr. James Naismith first created the sport we all know and love back in 1891 when challenged to come up with an indoor athletic competition. To give basketball structure, he came up with 13 basic rules for the game.

Though many of the rules are quite interesting (such as if a team fouled their opponent three times in a row the other team would get free points) the most important one for the purposes of this article is number 12. It reads, “the time shall be two fifteen-minute halves, with five-minute rest in between.”

That, of course, gives us the basic structure of what college uses today. There are two halves, and each of them is separated by a quick halftime. A thirty-minute game is quite short, and that helps explain the other changes the game went through overtime.

A Century of Change

It did not take long for people to realize that two fifteen-minute halves were not enough time for a proper game. The shorter periods resulted in low scores and did not provide enough exercise for the players.

As such, in 1905 the official rules changed to extend the time to two twenty minutes halves with a 10-minute break in between them. Sound familiar? That is the same format the NCAA still uses to this day.

However, the two half system did not stick for that long. In 1951 the game went through a huge change when the league decided to split it up into four 10-minute quarters. This rule was for both college basketball and the NBA.

While that change stuck in professional basketball, it did not hold in college. In fact, the four-quarter system was only around for three short years in the NCAA. In 1954 college basketball went back to playing in halves while the NBA stayed with the quarter system.
That created a break that still lasts to this day.

The change from halves to quarters happened a long time ago. So long ago that few people know why the split occurred. Some people believe colleges favor the two halves because it is how the first rules were put in place, while others think it was to separate themselves from other leagues.

One of the leading theories is that it makes the game much more competitive. Two long halves tend to create closer games than four separate quarters. Close games not only lead to more excitement, but they can also lead to upsets. Those drive viewership for big tournaments like March Madness.

Two halves also create less stopping time, which gives the game a steady pace and keeps everything moving along. The more flow that exists, the better the games are to watch.

While none of these theories have been absolutely proven one way or another, they do help suggest why one league goes with two halves and one goes with four quarters.

Both work. It just comes down to preference.

Two Sides of the Same Coin

College basketball has many rules that separate it from the NBA. The two halves are the most distinct of such regulations. Though no one is exactly sure why they choose to stand on their own, there are many theories that could explain it.

Whatever the reason, there is no doubt that the two 20-minute chunks have become a staple of the NCAA and will continue to be that way for the foreseeable future. Though there has been some talk of switching over to quarters, nothing is quite in place just yet.