What’s the Regulation Height of a Basketball Hoop 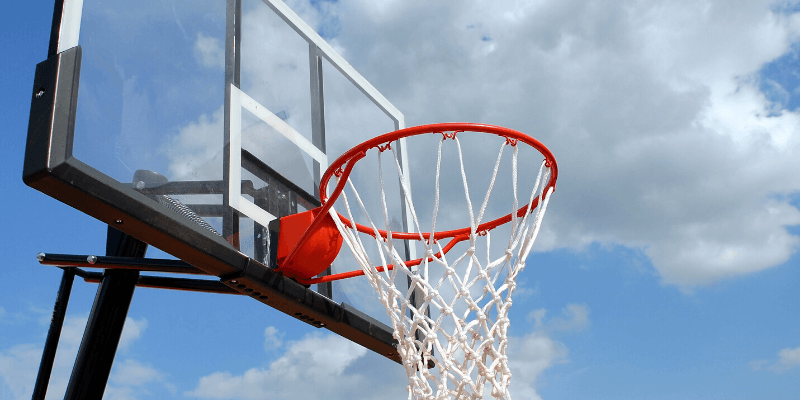 Most hoop dreams are made of big monstrous dunks, but reaching the summit is a steep climb. Many of us out there will never know what it is like to dunk, and some of us lowered the hoop and tasted the sweet sensation of a dunk.

If you think about it, the main reason most people can’t dunk is that the hoop is too high, the 10-foot mark is just low enough for most of the population to touch. While some goal systems allow you to adjust the rim height to your liking, the regulation height is a widely used standard.

When you look back to when James Naismith invented the game of basketball in 1891, you will find that he used a basket height of 10 feet. Since then the game has changed, but the height has stayed the same, across every league and country.

Height of an NBA Basketball Hoop

The regulation height has always been 10 feet. Even before the NBA (which was established in 1946), when the game of basketball was invented in 1891, James Naismith used a height of 10 feet. That height has never been changed.

Height of a WNBA Basketball Hoop

The height of a WNBA basketball hoop is the same exact size as the NBA hoop. James Naismith invented the game of basketball in 1891 using this height, and to this day 10ft [305cm] is the universal standard hoop height used around the world.

Height of an NCAA Basketball Hoop

Height of a FIBA Basketball Hoop

At the 1936 Summer Olympics basketball primered on the athletics world stage. The inventor of the game, James Naismith, sat as the tournaments president and awarded the medals to the winners. They game was played under the supervision of James Naismith, and since then has used his rules of a 10 foot basket.

Today, International Basketball is handled by FIBA (Fédération Internationale de Basketball), which was established 2 years after the summer games in 1936. The height has always stayed the same.

Height of a High-School Basketball Hoop

American high-schools, as well as high-schools around the world use the same basketball hoop for their games. 10 feet, or 305 centimeters, this height is the same as the NBA, WNBA, and NCAA. The height was chosen by the inventor of the basketball, James Naismith.

Height of a Youth Basketball Hoop

Most middle-school or junior-high regulation game will use the same height as high-school. But some summer youth leagues might use a shorter hoop depending on the age range. We suggest the height of the hoop per age bracket as follows:

Has the Height of a Basketball Hoop Ever Changed?

Ever since James Naismith invented the game of basketball in 1891 the height of 10 feet has always been used. Over 120 years later the NBA and FIBA still uphold 10 feet as the universal height of basketball. Not once has the height ever been changed.

Even though the rules and court dimensions have gone on to change, the basket has always stood by its original 10 feet mark.

Even when Dwight Howard asked to raise the rim to 12 feet for the 2008 Slam Dunk Contest during All-Star Weekend, the official denied his request. Claiming the standard 10-foot rim is universal across all games of basketball, including dunk contests.

Who Decided on the Height of a Basketball Hoop?

James Naismith, the inverter of basketball.

When James Naismith first invented the game in 1891 he wanted to invent an in-door sport that can be played inside during the winter. So in a YMCA in Springfield, Massachusetts he invented the game. Mounting a peach basket to the wall at exactly 10 feet.

It is said that the 10-foot mark was not his intention, but that the railing in the YMCA was simply 10 feet. Since that day the 10-foot basket has never been lowered or raised over the 120 years the game has been played.

Will the NBA ever change the height of the Rim?

While I would think it to be unlikely, there are some analysts, journalists, and coaches who have suggested raising the rim. While changing rules or even court dimensions would not be anything new for the NBA, the game has always been played with a 10-foot rim over the last 120 years.

Though, in 2017 there was an exhibition game played with an 11-foot rim. I doubt raising the rim would in the near future. The amount of player, coach, and fan backlash would be overwhelming. And frankly, the big-wigs at the NBA seem to be in favor of a more exciting, TV favorable games.

Raising the rim would make dunking and other amazing feats more difficult, and reduce the game back to fundamentals. Something the league definitely does not want.

Every major American city will have at least one basketball court. If anything there will be a half-court in someone’s garage. These basketball courts exist all around the world, all featuring the same basket height. 10 feet, a height decided upon over 120 years ago in a chilly winter in Massachusetts.

Leave a comment below if you think the rim height should be changed, or if you think James Naismith had it right.