What is a Layup In Basketball? 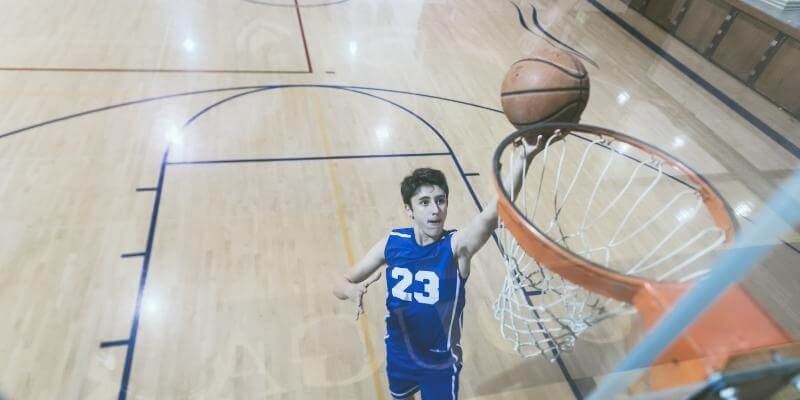 Out of all shot types in basketball, layups are some of the easiest. They can also be some of the most difficult. There are many different layup styles out there, and they range from the incredibly straightforward to the fancy and advanced. Even so, they’re all shot in the same way.

Every player will learn a layup early on in their basketball career. The following article will look at why it’s such a fundamental shot, how to shoot and improve upon it, and the different ways it’s been innovated over the years.

The Mechanics of a Layup

At its most basic, a layup is a simple shot where a player dribbling or driving towards the basket literally lays the ball up to the hoop by scooping it underhand motion at the rim or backboard. It’s much more common to use the backboard, as that increases the shot percentage.

You don’t have to use the backboard during a layup, but it’s certainly easier to make the shot than it is to try and get it directly into the hoop. The only time you want to ignore the glass is when you’re performing a layup directly at the front of the rim. In that case, just put the ball in.

As mentioned, there are several layup types. The most basic is the overhand layup. That’s when a player softly tosses the ball off the backboard during a drive to the hoop. This can be done with either their right or left hand, but you want to use your dominant when possible.

If you don’t have the angle to use the backboard, you also have the option to shoot a finger roll. This is also shot one-handed, but rather than using the backboard you roll the basketball off your fingertips directly into the hoop. It’s difficult, but useful when you’re in the middle of the key.

Another great layup to add to your arsenal is the reverse layup. For this shot, you want to attack the basket from the right or left side and then, rather than shoot it like a normal overhand layup, you jump under the basket and “reverse” by shooting the ball from the other side.

A reverse right handed layup starts on the left side and vice versa. This is a great move for players who need a way to sneak under big men in the key or get around a tight defender.

This move is typically only used when you’re going in from the baseline, but it’s a good way to catch your defender off guard. Keeping them on their toes when you’re driving to the basket is how you create strong offense.

How to Improve Your Layups

Knowing the different layup types is useful, but it’s a far cry from being able to do one. If you’re curious about improving your own shot, know that layups are all about touch. You don’t want to throw them up too hard, but going too soft will also likely lead to a miss.

The most important aspect to remember is that layups are always shot in motion. You’re running or dribbling to the basket, which means you have a lot of momentum. Being able to effectively pull up a bit when finishing or properly utilize your hang time is extremely important.

Planting your feet before going up for the layup is a great way to slow down momentum. It also helps to jump up rather than forward. If you do need to launch yourself at the hoop, try to bring your arms back to give yourself extra room to create a shot.

Layups are about scoring points. You might be able to get to the hoop or put on a tricky move, but if you can’t score it’s all for naught. Many players will get right to the rim and then have too much momentum and throw up an out of control shot.

If you want to improve your own layup game, it’s best to try to stay on top of your drive as much as possible. You can work on finishing as much as you want, but it won’t do you any good until you can get past your defender and effectively finish.

Layups are one of the most iconic shots in basketball. A solid underhand finish or impressive drive is always fun to watch and perform. It might just be two points at the end of the day, but it’s two of the closest points you can score without throwing down a dunk.

No matter what layup you want to work on or shoot, as long as you start with the easier shots and work your way up you’ll have plenty of great tools to add to your repertoire.