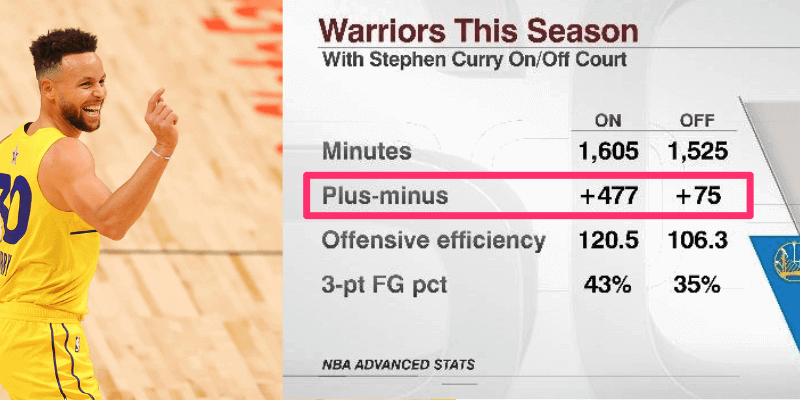 The NBA is a league of stats. While most are fairly straightforward, such as three point percentage or rebounds per game, some are a bit more nebulous. That’s especially true of plus/minus, an important category that very few spectators or casual fans fully understand.

I have been in and around the game of basketball for nearly thirty years. That has given me a ton of experience and knowledge with the inner workings of the sport, as well as a deeper understanding of how all different stats work together when it comes to evaluating talent.

In the following sections I will outline and break down what +/- is, how it works, and why it’s so important to today’s NBA. Then, I will use that information to go over why some players have such high ratings in the category, and others have such low scores.

+/- is not as hard to understand as many people first might think. The measurement, which reflects how much a player affects a game, simply shows how much one person contributes to their team’s overall point total per every 100 possessions.

That might sound a bit dense, but the statistic merely shows the positive (or negative) impact any one player might have on their team as a whole. As +/- strips away all the stats, it’s a good metric for how well someone does (or doesn’t) play.

If a team gets better when a player’s on the court, +/- will reflect that. As such, it seeks to stabilize basic statistical ratings and add another dimension when it comes to properly evaluate how vital someone is to their team’s overall play.

Once you understand what +/- is, and what it sets out to measure, it’s also important to figure out exactly how it’s calculated. There are several box score categories, but what makes the statistic so interesting is that it doesn’t care about any of them. It just looks at the total score.

You then take that and extrapolate it out to every one hundred possessions to get an overall plus/minus. If someone has a total +3 rating, it means their team is three points better for each 100 possessions that player is on the court.

Using the above metrics, a good +/- typically sits between 2 and 8. Anything between 2 and 0 is an ok player, 0 is an average player, and those who dip lower than that are generally mediocre. It’s not always that simple, but that’s a good place to start.

Most all-stars tend to have a +/- that sits between 2.5 and 5. Going above that mark is when you get to the truly special contributors like Lebron James, Magic Johnson, and Michael Jordan. Great players all had great plus/minus scores during their careers.

How Important is it?

When asking about +/- it’s critical to understand how much it matters. Though some people like to put a lot of stock into the rating, the statistic does come with some flaws. Most notably is the hyper focus on the stat sheet.

There are many times a player doesn’t up any meaningful stats and still helps their team win the game. For instance, Kawhi Leonard has one of the lowest +/- ratings of any all-star, but he’s been absolutely critical to the Clippers’ late success.

That’s because the statistic assumes everyone is even, and it also doesn’t count for external factors. If a superstar goes into a tied game and the other team gets hot and makes a lot of shots, their +/- will dip down even if the scoring run wasn’t necessarily the all star’s fault.

Plus/minus can be a useful tool, but it’s important to note that it doesn’t exist in a vacuum. You need to have context, as well as other critical stats, for it to give a proper read on whether or not someone is truly changing the game when they’re on the court.

Below are some related questions you might have, I’ll briefly answer them.

Yes and no. The statistic, while useful in its own way, is not the end-all-be-all of stats. Better players do tend to have higher +/- rankings than worse ones, but there are many other factors that actively contribute to that score. As such, it can be misleading sometimes.

In the current NBA no player has a better plus/minus than Stephen Curry. With an impressive ranking of 7.18, nobody can impact their team quite in the same way as the deadly sharp shooter.

Yes. As the statistic is so focused around the box score and individual impact on the game, all you have to do to up your +/- is to play better or more efficiently. The more points, rebounds, assists, or blocks you put up, the higher your overall rating will climb.

As with any statistic, it isn’t perfect. A player may put up great stats, or be extremely helpful to a team, and still not have a great +/- due to other circumstances. It’s always critical to look at the individual stats surrounding +/- as well.

Understanding +/- might seem tricky at first, but it’s easy once you fully understand how it all works together. Though the statistic does have some flaws when looking at it alone, knowing what it means and how it’s calculated will give you a deeper understanding of the game.