What Are the Positions in Basketball? 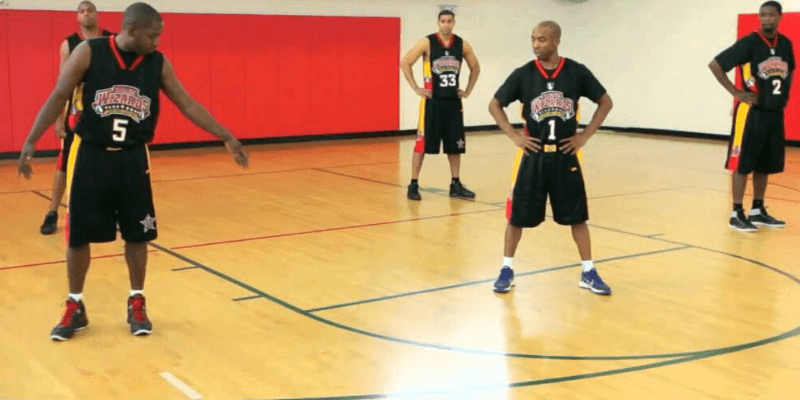 A coach could put 4 centers and a small forward on the court, or he could play 3 shooting guards and 2 power forwards. This strategy is probably a bad choice, but the rules do specify positions and no player is required to be designated as playing a certain position.

With that being said, we do usually like to give a position to each player. Their role on the court is often defined by that position and they are usually assigned that position because of a combination of their skillset and possibly their body type in relation to the rest of the team.

Although there can be some gray areas and there are what we call hybrid positions (a combination), below are the 5 basic positions in basketball. You might see these listed on an official roster.

As you can see, each position, not only has a name but also a number and an abbreviation. You will often see rosters, stat sheets, and other materials that refer to the positions using the numbers or the abbreviations.

When James Naismith created the original 13 rules of basketball in 1891, there were no defined positions or a rule stating how many players could be on the court at one time. He simply split his class of 18 students into two teams of 9 and had them start playing.

Some have said that Naismith’s first basketball game with 9 players per side had 3 guards, 3 forwards, and 3 centers. No one really knows if these positions had been defined yet, but they may have performed the roles similar to those positions.

The rules of basketball did not limit the number of players per team on the court to five, until around 1896, which is probably when the positions began to be defined. There were positions such as a “running guard” who brought the ball down the court and a “stationary guard” who took long shots and hung back on defense to protect the basket. As in most sports, the positions evolved along with the rules of the game.

Let’s take a look at the 5 basic basketball positions in a little more detail and give some examples of players who currently play those positions.

Some examples of point guards are Stephen Curry, Russell Westbrook, and Kyle Lowry.

As the name says, this guard is usually a great shooter with 3 point range but also the ability to move with or without the ball to get good open shots anywhere on the floor. Also known as the “off guard”, they are normally very good athletes and ball handlers. If needed they can bring the ball up the floor in place of the point guard.

Some examples of shooting guards are Klay Thompson, Devin Booker, and Victor Oladipo.

One of the most versatile positions on the court, a player at this position is usually expected to be able to do it all. They can handle the ball, pass, shoot, play in the post area or take 3 point shots. They are usually good rebounders and defenders as well. They normally have decent height but very good mobility and athleticism.

Some examples of small forwards are Lebron James, Paul George, and Kawhi Leonard.

Sometimes known as the enforcer on the team because they are usually big and strong and unafraid to mix it up physically under the basket with the other team. As the name says, they usually use their strength and power to play in the post area and score close to the rim. They are usually one of the best rebounders on the team and very good defenders in the paint.

Some examples of power forwards are Anthony Davis, Thaddeus Young, and Serge Ibaka.

The center is usually the tallest player on the court and plays close to the basket on both offense and defense. They are normally good rebounders and shot blockers but are often not very mobile due to their great height. They usually do most of their scoring close to the rim.

Some examples of centers are Demarcus Cousins, Marc Gasol, and Andre Drummond.

Keep in mind that many of the players in the examples can play multiple positions. In today’s basketball, it is always good if a player has the versatility to play at different spots. Several players nowadays play hybrid positions making them even more dangerous on the court.

Because basketball is continually evolving and players continue to get bigger and more athletic, there are many players with skills that fit multiple positions. Having the skill sets of multiple positions makes a player very versatile and desirable to a basketball team.

There are also players who may have the skill set of one position but the size for another position. These players are usually called “tweeners”. Players that can play multiple positions and tweeners often play in what we call hybrid positions. A hybrid position uses skills from 2 or more of the traditional basketball positions. Below are some of the hybrid positions that we often see today.

A combo guard can play either point guard or shooting guard. They have good ball-handling skills and are also very good shooters. George Hill of the Milwaukee Bucks is a great example of a combo guard.

A point forward is typically a player who plays the small forward position but has the ball-handling skills to bring the ball up the court and run the offense. Lebron James is a great example of a point forward.

This is a player who has the skills of both a shooting guard and a small forward. They are usually taller and bigger than a shooting guard but can shoot and handle the ball very well. Jimmy Butler is a good example of a swingman.

A power forward who is a good long-range shooter and makes a lot of 3-pointers. Because of this ability, they are said to be able to “stretch the floor”, which means they bring the defense’s power forward out of the paint leaving the lane open for easy layups. Kevin Durant is a good example of a stretch 4.

The positions in basketball have evolved along with the game and the athletes who play it. It is very interesting to watch how coaches utilize players and come up with new game plans and styles of play based on these positions. I’m sure that basketball positions will continue to evolve in the future.

Who are your favorite players for each position? We’d love to hear from you, so please leave your comments below.