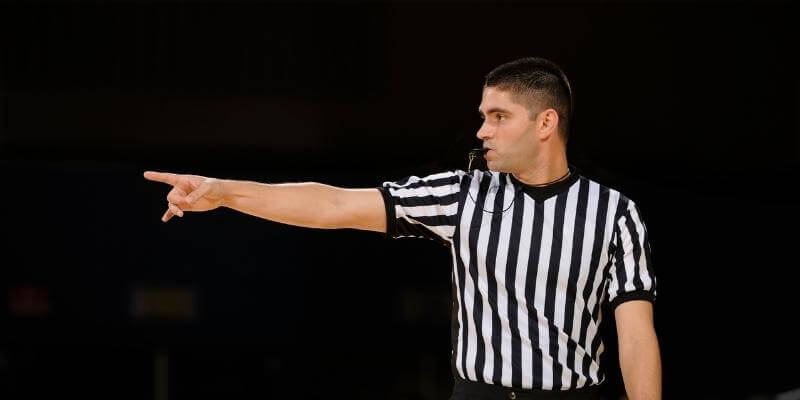 Following a basketball game is simple during regular play, but it gets a bit trickier when a foul gets called or the game stops. There is a wide range of unique events in basketball, and they all come with their own hand signals.

Knowing those signs makes watching the contest much easier. If you’re curious about them, or if you want to know what they mean, the following paragraphs break them down in great detail.

Stop Clock/Start Clock: To signal to the table that the clock needs to stop, a referee will raise their hand straight into the air over their head with the palm facing out. To resume the clock, they hold the same position and simply drop the raised hand to the floor.

Timeout (Full and Thirty Second): If a team, or the official, needs a full timeout, the ref will signal it by putting both arms fully out to the sides and creating a large “T” shape. If the call is for a thirty second timeout, the official places both of his hands on top of his shoulders.

Jump Ball: In the event of a jump ball, which happens when two players from opposite teams hold onto the ball at the same time, a ref will extend his arms and point both of his thumbs up.

Substitution: When a team calls for a substitution the ref will raise one hand to the time keeper in a “stop” motion and then use his other hand to wave the new player into the game.

Charge: If an offensive player runs over a defensive player who’s in position, it’s a charging foul. When that happens, the ref will call it by placing one hand on the back of their head and pointing in the opposite direction of the play.

Hand Check: If a player reaches and hand checks their opponent, a referee will extend one arm in front of their chest and then grab their wrist with their other hand.

Blocking: A blocking foul is committed when a defensive player moves into, or literally blocks, another player. This is signaled by moving both hands, balled into fists, down against the hips.

Holding/Pushing: A holding signal is made when a ref extends one arm upwards in front of his face and grabs their wrist with their other hand. To signal a push, the ref will extend both hands straight in front of them with their palms facing outward.

Intentional Foul: An international foul happens when a player purposely tries to foul someone else. In this instance, a referee will raise both arms above his head and cross them.

Technical Foul: To signal a technical foul a referee places both of his hands in front of him and places them together to form a “T” shape.

Double Foul: If two players commit fouls at the same time, the official will ball his hands into fists and then extend them out to the sides.

Illegal Hand Use: If a referee calls a player for illegal use of hands, they will put both hands in front of them at waist level and grab one of his wrists with the other hand.

Traveling: To call a travel, a referee will ball their hands into fists and then rotate them in a circle pattern in front of their body.

Carrying/Palming: If a player palms the ball, a referee will put one hand in front of their body with the palm up and flip it face down.

Double Dribble: A double dribble violation is called by the ref placing both hands in front of himself with the palms down. From there, he alternates them up and down in a dribbling motion.

Three Seconds/Five Seconds/Ten Seconds: If a player violates a timing regulation, a referee will raise a certain number of fingers on their hand and wave them back and forth. Three fingers for three seconds, five for five, and ten for ten.

Kick Ball: Sometimes, a player will kick the ball with their leg or foot. If that happens, the ref will raise one foot up in a slight kicking motion.

Two Pointer/Three Pointer: If a player makes a two point shot, the ref will extend their arm parallel to the floor and point with two fingers. If a three gets made, they will extend both arms into the air with their fingers pointed upwards.

Basket Counts/Doesn’t Count: When an official wants to signal a made basket after a foul they will ball up their hand and punch downwards. If they want to signal that the shot doesn’t count, they will “wave off” the shot by crossing their hands in the air.

Lane Violation: In the unlikely event that a player goes over the lane during a free throw, a ref will signal it by raising one of his arms out to the side and holding it there until the free throw finishes.

Everyone gives referees a hard time, but they have a lot to do and memorize during a game. It’s easy to know one or two signs, but having everything ready to go at all times isn’t easy. That can be even trickier for a casual fan or spectator.

The above paragraphs give a comprehensive look at just about every hand signal you’ll see in a regular game. Being able to immediately recognize them teaches you more about the sport, and makes it much easier to follow what’s going on during the action.