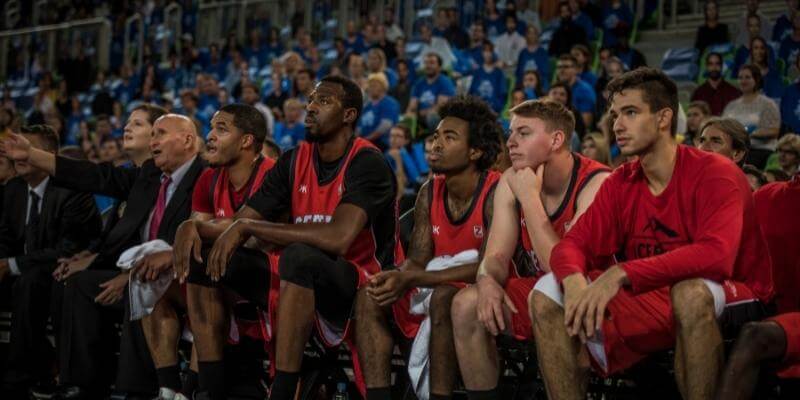 Basketball is a quick, fast-paced game. While it’s easy to follow the scoring and defense, getting a handle on the substitutions is not as simple.

Players are constantly moving on and off the floor, and keeping track of what they’re doing and why takes a bit of extra knowledge.

Here, I will analyze the way basketball substitutions work. The following sections cover the basic ones, as well as the more advanced.

Through that breakdown, you’ll get a better idea of how the sport operates, as well as why certain substitutions happen when they do.

What is a Substitution?

Before going into more detail, we first need to discuss exactly what a substitution is and why it’s important.

A substitution is when a team switches out a player in the game for someone who is on the bench. This is done for many reasons, but it’s mainly to give a player rest.

Substitutions slightly differ from sport to sport, but in basketball it’s primarily a coaching decision. They tell the player on the bench they’re going in, and the person they’re supposed to switch for comes out. A player can sub themselves out, but that’s a much rarer occurrence.

There is no limit to how many substitutions can be made during a game. There aren’t a ton at lower play levels, but you’ll see a lot at the college and NCAA levels.

That’s because the more intense the games get, the more substitutions tend to be needed.

When Can You Substitute a Player?

Substitutions happen a lot, but they cannot happen at any time. Rather, there must be a dead ball situation where play stops completely before they can happen.

A coach will decide who they want to sub in before that happens, and when there’s a dead ball that player enters the game.

A dead ball is anytime play stops. That includes fouls, the ball going out of bounds (turnover or not), a player getting injured, or a timeout of any kind. If play is going on for any reason, the substitution cannot come into the game.

A quirk is that if a player gets fouled and needs to shoot more than one shot, the sub does not enter the game until after the first foul shot. If there’s an “and one” situation, they just come in when the foul first happens.

The only time a player is not allowed to sub in during one of the above instances is when they are disqualified or ejected. In those cases, they are out for the entire game no matter what.

Why Use a Substitution?

There are a few reasons a coach may want to sub a player out during a game, and they are all nuanced in their own way. The number one reason is that a player on the court gets tired. If they see a player, no matter how good, sucking in air they’re probably going to pull them out.

Superstars or the best players on a team will often play close to the entire game, but they will likely sit every now and then to catch their breath. In fact, some players have a set schedule (like the start of the fourth quarter) where they sit every game.

Fouls are another big reason for substitutions. In basketball, players are only allowed to foul someone five (high school, NCAA) or six (NBA) times. If they hit that number, they’re ejected.

If a player is getting close to their limit or commits fouls too early, a coach may have them sit.

Players can also be pulled if they aren’t shooting too well or if they make a few bad plays in a row. This is something you won’t see as much at higher levels, as those players know how to deal with and power through slumps, but it happens in high school quite a bit.

If a player ever pulls themselves out of a game, it’s usually due to an injury. Luckily, such instances rarely happen.

Even so, if someone gets hurt or doesn’t feel one hundred percent, they always have the ability to signal to their coach and get back to the bench.

Substitutions are critical in today’s NBA. While there are some players who never leave the game, even the biggest stars need to go out every now and then. Getting rest is a key part of the sport, especially during the later parts of the season.

Basketball subs are not complicated, but they do have a few quirks that are important to know. It doesn’t matter if you’re just watching the game or need to balance substitutions of your own, understanding how they work will give you a better grasp of the sport overall.