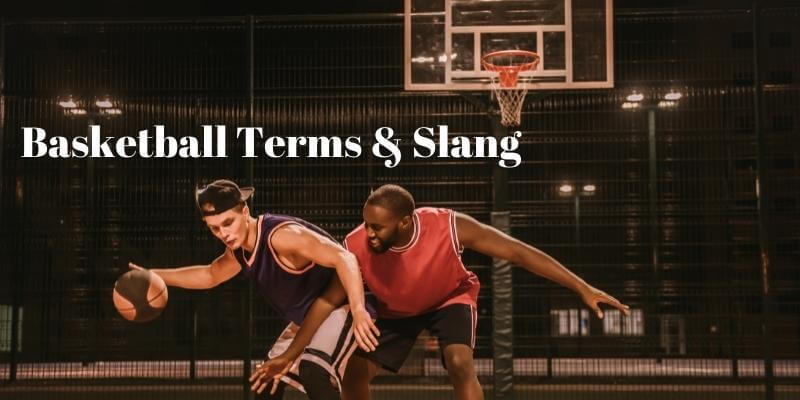 In order to be a true basketball fan, you must speak like one. That means countless basketball terms that explain the game but also you must be able to speak the slang for cred among hoops diehards. Maybe you are a diehard already, or maybe you are looking to build your bball vocab to keep up with friends.

Either way, you have to brush up on your basketball terms and learn the slang to spit flow on the spot.

Nervous about learning all the lingo before your next get-together? Don’t be!

Just read this article and pay attention to select terms that will get you through any game with someone without making a fool of yourself. This list does not contain every basketball term or slang word (that would take all week!) but will do the trick on the fly.

A basketball play which involves two players and results in a dunk or layup. The player with the ball makes a pass towards the hoop and their teammate jumps up and catches the pass and scores either a dunk or layup in one motion without landing on the floor with the ball.

A pass that leads directly to a basket. Learn more.

Further Reading: Most Assists in an NBA Game

The basketball court is divided in the middle by the half-court line. The backcourt is the side of the court that the offense doesn’t score on. Once an offense crosses half court, they are not allowed to cross back to the backcourt or it will result in a backcourt violation.

A backdoor cut is a move towards the basket by an offensive player without the ball. The cut is referred to as “backdoor” because the cut is made behind the defense’s back as opposed to cutting in front of the defender.

Block (this term is used on multiple occasions)

Related Reading: Top 5 Most Blocks Leaders in an NBA Game

The wooden floor where the game is played. The dimensions for an NBA court are 94 feet long by 50 feet wide and are labeled by the out-of-bounds lines.

Played by the team without the ball and is an attempt to stop the offensive team from scoring the basketball. There are two main types of defense: man-to-man where each player is assigned to guard a specific opponent, and a zone where the team picks areas on the court to “cover”.

The act of an offensive player bouncing the ball up and down while moving around the court. If a player does not consistently bounce the ball while they move around the court with the ball, they will be called for a traveling violation.

A field goal scored by an offensive player where they jump up to the rim and throw the ball through the rim while grabbing the rim in the process.

When the offense gets up the court faster leading to them outnumbering the defensive players for a short period of time. Fast breaks usually begin after the defense rebounds or steals the ball from an offensive team.

A violation that occurs when a player uses excessive force on their opponent. Both the defense and offense can commit a foul, but it is more common to see defensive players committing a foul because of their goal to stop the offense from scoring.

A shot taken from the foul line after a player is fouled. The shot is taken without any distraction or without anyone guarding them. Unlike field goals, free throws are worth only one point each.

Occurs when one offensive and one defensive player simultaneously hold the ball for a long period of time. In the NBA, a jump ball is resolved by going to the closest foul line and throwing the ball in the air for the two players involved in the jump ball to try and tip it to one of their teammates.

A type of shot made when an offensive player shoots the ball very close to the basket without grabbing the rim. The glass backboard behind the basketball hoop is usually used during a layup.

The team with possession of the ball is on offense, meaning they are actively trying to score the basketball.

The term for when a player grabs the ball after a missed shot. Rebounds can be grabbed both on the offensive and defensive end of the court.

A term for when a player uses their body to shield an opposing player. A screen can be used on the opponent guarding the ball so your teammate can drive around them and “off-the-ball” on a teammate who does not have the basketball.

Read More: What is an Illegal Screen in Basketball

A shot taken and made behind the three-point line on the court. A three-pointer is worth three points.

The terms above are all very useful during the flow of the game. Now, let’s talk about some of the slang terms used by more knowledgeable fans!

A term used when an offensive player makes a basket and is fouled in the process. If you make a basket and get fouled you get an extra free throw, hence the phrase “and-one”.

A term used for players who hold, dribble, or shoot the ball too much.

A term used for when you make a defender look silly when you go by them. It refers to the defense shuffling their feet so much in opposite directions that they “break” their ankles trying to guard their opponent.

When a player is scoring a lot of points, people will refer to them as “getting buckets”.

The term is used when describing someone who can jump high. The term bunny hop is shortened to “bunnies”.

When a player dunks on someone it is often referred to as “catching a body” because of how the dunker meets the defender at the rim and still dunks on them.

A term used to refer to the shot that ends the other team’s chances of winning the game.

Another word used for an assist.

A term used to refer to a questionable foul call where the player barely touches their opponent.

A term used to refer to a shot that swishes through the net and doesn’t touch the rim.

Another word for the basketball.

Another term used for a shot that swishes through the hoop.

Being able to talk about the game of basketball is important while you watch a game. If you feel unprepared to watch a game and show your lack of knowledge, take a good look at the above terms and slang phrases.

These words will help you belong and impress some of your friends in the process. These terms will also help you understand the game better, making watching the game a much more enjoyable experience altogether!

Did you know all of these terms and their meaning before reading this or did you learn something? Let us know in the comments!