What is Traveling in Basketball? 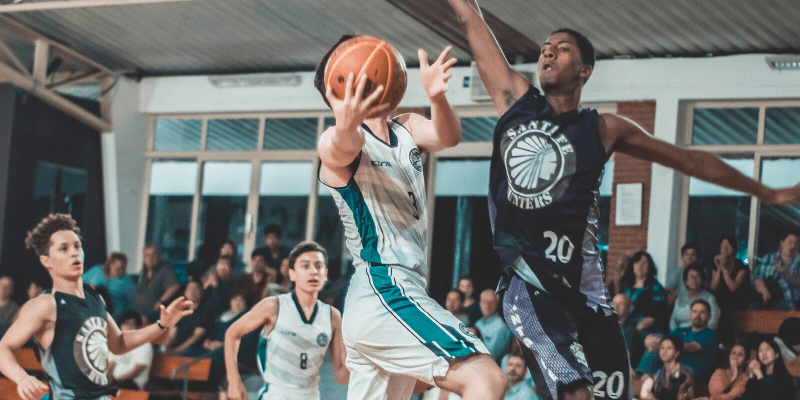 No, we’re not talking about going on a road trip to play another team at their gym or arena. The traveling we are talking about takes place on the basketball court and it is never a good thing when you or a player on your team is called for it.

If you ever watch basketball, then you have probably heard the referee blow the whistle and call “traveling”. While it is rarely called in the NBA (many feel because the referees let the players get away with it), it can be a frequent call made in lower levels of basketball, especially in youth leagues where the players are still learning.

Traveling is a violation in basketball in which the player in control of the ball, but not dribbling, makes an illegal move with their feet. A traveling violation results in a turnover, which means that the ball is awarded to the other team. Sounds pretty simple right? There are quite a few situations in which a traveling call can be made, so let’s take a closer look at what a traveling violation really is.

There are various situations in which a traveling violation can be called. There are also many situations that may appear to be a violation but are not. The differences in rules between leagues can also be a source of confusion. Let’s take a look at some facts that are common to traveling in any situation or league.

If you watch much basketball, you will also hear traveling referred to as “walking” or “taking steps”. “Up and Down” is also a commonly used phrase that is really just a traveling violation when a player leaves the floor and lands without passing or shooting the ball.

When we talk about traveling in basketball, we often refer to the pivot foot. So, what is a pivot foot?

The pivot foot is a single foot (can be left or right) which must remain in contact with the floor. You can think of it as an anchor to the floor. A player is allowed to spin on the pivot foot as long as it remains in the same spot and does not slide across the floor.

The pivot foot must remain in contact with the floor as long as the player has the ball and is not dribbling or jumping into the air to shoot or pass the ball. The establishment of a pivot foot is often important in determining a traveling call.

A pivot foot is established when a player is stationary with the ball (not dribbling). Once one foot is moved, the other foot becomes the pivot foot. If a player lands on one foot first, the first foot to contact the floor is usually considered to be the pivot foot.

There are situations in which no pivot foot is available, for example after a “jump stop”. A jump stop occurs when a player catches the ball while moving, contacts the floor with one foot, jumps into the air and then lands on both feet. In this case, there is no pivot foot available and the player can not move either foot.

Here are some of the common illegal movements that constitute a traveling violation in most basketball leagues.

There are other traveling violations that are specific to each basketball league. You can take a look at some of the league rules here and here you will see more descriptions of these violations.

Early Step – A player takes a step and lifts the pivot foot before releasing the ball to dribble. This is one of the most common violations and often happens when a player is attempting to drive to the basket from a stationary position.

Pivot Slide – A player is spinning or stretching and their pivot foot slides across the floor.

Up and Down – A player leaves the floor attempting to pass or shoot but never releases the ball and comes back down to the floor.

Three-Point Steps – A player gets the ball in front of the 3-point line and steps back behind the line to shoot without dribbling. If the player lifts the pivot foot it is a traveling violation.

Rebound Shuffle – A player gets a rebound and shuffles their feet or falls down.

There are many ways that a player can commit a traveling violation. The few we have explained above are some of the most popular ones. On the surface, it may have seemed like a traveling violation is very easy to spot but as we can see, it can be much more complicated than just a player improperly moving their feet.

A move that has become extremely popular in the NBA and basketball in general, can often look like, and be mistaken for traveling. The “Euro-Step” is a move in which a player picks up their dribble while taking a step in one direction, and then takes a second step in the other direction to avoid a defensive player. Since the second step is considered a continuation of the original move off of the dribble, it is not a violation.

According to the New York Times, the Lithuanian Sarunas Marciulionis was one of the first players to bring the move to the NBA in the 1990s. Soon after, Manu Ginobili of the San Antonio Spurs perfected this move. Since then, the Euro-step has become popular in the NBA, college and even high school. You will even see players practice it in the layup line before a game.

If you would like to see more about how to learn and practice the Euro-step take a look at this instructional video. If your still unsure about whether or not this is a legal move, take a look at the NBA Video Rule Book to see what they have to say about it.

Understanding all of the details and rules of traveling can be very important when trying to determine a true traveling violation. Take a look at this source to see more details on rules, pivot foot establishment and things that are allowed by different leagues. You may be surprised to learn that many of the moves you think are a violation, really are legal.

If you are interested in seeing more information on the different traveling rules in different leagues take a look here for a good summary.

A visual explanation can also be helpful to see the differences in legal and illegal moves. Take a look at this video to help you visualize what a traveling violation looks like.

Playing basketball without committing traveling violations is one of the basic fundamentals of basketball. It is something that is taught early on when learning the game of basketball and violations are most often seen in youth and beginners leagues.

Many fans and critics may feel that professional leagues such as the NBA are allowed to frequently get away with traveling and that is why it is rarely called. In my opinion, this is a little bit of an exaggeration. While there are often missed or bad calls in the league, many times the skill of the players and their knowledge of the game allows them to make moves that may look like infractions but are really legal moves.

Do you feel the NBA allows players to get away with traveling? What is your opinion? We’d love to hear from you.