Basketball VS Football (American): Which is Better? 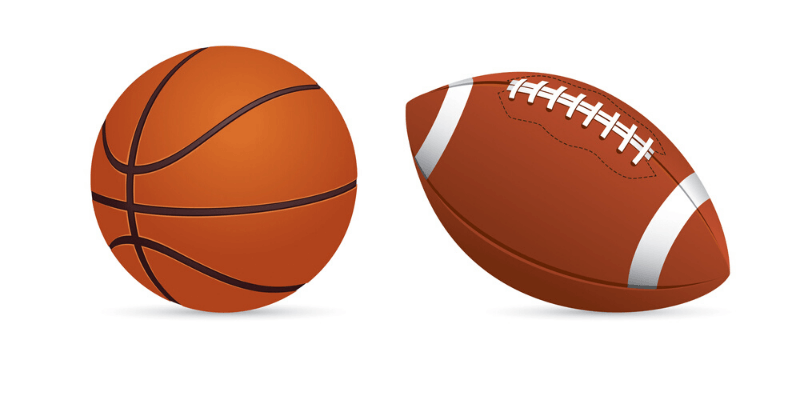 It probably wasn’t long after the invention of basketball in 1891, that this age-old debate began in some circles. The game of basketball, created by Dr. James Naismith, spread rapidly throughout the United States and many would have a great argument that it was a better overall sport than football.

American Football has been a staple of sports interest since the early 19th century. In the more modern era, it has been one of the most fascinating and watched sports in the United States and many other countries. Based on ratings and popularity, professional football is America’s sport now, overtaking that claim from baseball almost two decades ago. You can just look at the ratings of the Super Bowl to see that it is one of the most-viewed events in the world.

As both sports have grown up and evolved together through the mid-1900s until the present day, there is no wonder that there has always been a debate about which is better: Basketball or Football?

Like many others, I am a huge fan of both sports. I grew up in the ‘70s and ‘80s watching and playing both sports. As a kid, my idols were guys like Walter Payton, Julius Erving, Dick Butkus, and Larry Bird. When I wasn’t watching them on TV, much of my time was spent trying to emulate them on the basketball court or football field.

I will admit, that I grew up in Indiana and North Carolina, two areas that live and breathe basketball, so I may be a little biased. With that being said, I have watched, played, and coached both sports at some level or another and I will say that I love them both.

They are both entertaining, fun, and dynamic sports in their own specific ways. The intensity, athleticism, strategy, and drama they both possess are unmatched by other lesser viewed sports. My history with both sports make it is hard to choose which is best between the two, but in my opinion, I have to say that it is basketball.

There, I said it. Basketball is a better sport, in my humble opinion. Football has some uniques aspects that basketball doesn’t offer as a team sport. First of all, if you like physical contact, football has plenty of it with constant collisions on every play. It also has great strategy, excitement, and team play.

Aside from the extreme collisions of football, basketball can rival the intensity and skill of football and then some. There are some who will argue that football is better but the following are my top 10 reasons that basketball is at the top of my list.

When James Naismith invented the game it was because he was asked to create a game that could be played indoors in a gymnasium during the long cold winters in New England. Even though we often play the game outdoors, it really is an indoor game and when we go to watch organized games they are almost always indoors. This is great since it is often played in the winter months.

Football, on the other hand, is played mostly outdoors. While many professional teams do have indoor dome stadiums, the majority of college and high school games are outdoors which often forces us to sit outside and brave the elements of those late fall and winter months in order to take in a game.

9. Great way to stay in shape

Football players are normally in shape, but we don’t really think of it as a sport that we play to get into and stay in shape.

Basketball is known as a sport that people play to get exercise. It was originally invented as a way to keep people active. Naismith developed the game to keep his wild bunch of PE students busy and in shape during the winter months. This wonderful game provides an outstanding cardio workout which is why you often see hoops at gyms, rec centers, and training facilities.

One of Dr. Naismith’s original intentions when creating the sport was to find a game that could be played without having so many injuries. While all athletes run the risk of injury, they are not as frequent and severe as those seen playing football. The violent and constant hits taken in football add up quickly and often lead to season-ending and even career-ending injuries. Head injuries and football have been in the news of late and the coverage is not positive.

Because hoopers can play games more frequently than football players, tournaments can be played quicker, adding to the drama of the game. Basketball players are able to play on consecutive days or even multiple games on the same day. This allows tournaments to include more teams and they can be completed quicker.

Football players can usually only play once a week which makes the playoffs take weeks to complete and not as many teams can be included due to time constraints.

Football players are covered in all kinds of equipment making it harder for people to connect with them as fans. While they are playing we rarely see their faces which can tell us a lot about someone. Basketball players are more personable to fans and they are more marketable. I can list off about ten different players with signature sneakers right now and couldn’t tell you one football star with their own cleat. That is a telling fact about both sports and their stars.

James Naismith invented the game with only 13 rules. Yes, the game has grown and evolved, so there are many more than those original 13, but they are still fairly simple and anyone can learn the game within a couple of hours. The rules of football can get very complicated and are very situational. Learning them can take quite some time because there are so many.

A season of hoops is filled with many games that are played quite frequently. The NBA plays 82 regular season games compared to the NFL playing 16 games a season. As a fan, it is great to see your team play multiple times a week. As a player, it is nice to be able to quickly get back out on the court and play the game you enjoy.

3. Can be played anywhere

Basketball can be played anywhere with a hoop and ball. I once worked at an auto dealership where we had a portable goal in the showroom. In the evenings, we would move the cars out and play pickup games. Basketball can also be an individual game where you can do drills and shoot to get better. To play football you need a large open area preferably with a soft surface such as grass.

2. Any Number of players

To play football you need quite a few players, but with basketball, you can play with almost any number, even by yourself. You can shoot around alone, play one-on-one with a buddy or play 21 with a large group of your friends. No matter the number of players you have, there is always a way to work out some type of game.

1. Can be played by anyone

The number one reason that basketball is better than football is diversity. It is one of the most diverse sports in the world. It can be played by almost anyone no matter what their gender, age, race, ethnicity or socioeconomic group. It is a sport that does not require a lot of expensive equipment to play. All you really need is to find a hoop in the park and a basketball and you’re in business.

There are many other reasons that make basketball a better sport, but as you can see from our list above, basketball is just a better all-around game that is more accessible to people all over the world. The benefits of playing are great for almost anyone and as a fan, it is one of the most exciting and action-packed games around.

What do you think makes basketball better than football? We’d love to hear from you, so please leave your comments.

In My opinion basketball is better

I agree but i think they are both fun to watch

Basketball and Football (soccer) is way better than American football!

I totally agree that basketball is better, it is way more fun to watch and play over all!