Basketball vs Soccer: Which is Better? 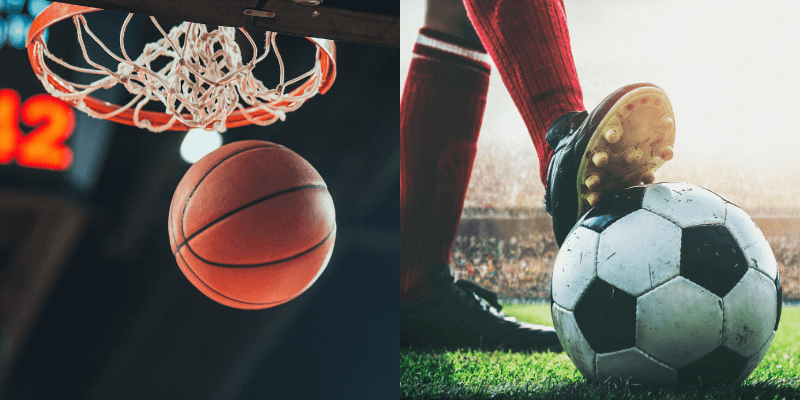 Basketball was invented in the 19th century and the game has continued to evolve making it one of the most exciting sports to be a fan of. Soccer has been around for thousands of years and has generally remained the same sport.

So, which is better: Basketball or Soccer? In this article, we will attempt to shed some light on the matter.

A Brief Background of Both Sports

Soccer can be traced back to 2000 years ago, with the first soccer rules being introduced in England. While places like England, Spain, and Italy all have rabid passionate fanbases, soccer is looked at as a global sport. One such example of this is the huge popularity of the World Cup every four years.

Soccer differs tremendously from basketball in that it is a lower scoring game. The excitement is in the journey to a goal and the tension release of a goal is arguably unmatched in sports. Whenever a goal is scored, fans get thrilled and the player is celebrated like a champion because goals are hard to come by. One plus about soccer is its accessibility. It can be played anywhere as long as you have a ball.

Basketball was invented in 1891 and was firmly established in the 20th century as different basketball leagues emerged. Top players like George Mikan, Bill Russell, and Wilt Chamberlain played a very big role in popularizing the early modern NBA. After them, players like Larry Bird, Magic Johnson, and Michael Jordan made the league a household name in the ‘80s and ‘90s.

The main objective of basketball is to score the ball while the opposing team tries to stop you. Unlike soccer, scoring is much easier to come by and is a huge part of the game. It isn’t uncommon for two NBA teams to each score 100 points per game.

A Side By Side Comparison of The Two sports

Soccer’s gameplay is not too intense, passes happen at a slower rate, and it takes forever for the possession to switch from one team to the other. On the other hand, basketball’s gameplay is quite fast because of the shot clock. It’s hard to find a dull moment.

One minute you are in the backcourt defending, and before you know it, you are running across the court to help your teammates finish at the rim. Unlike soccer, every player in basketball is engaged in the gameplay.

In soccer, only a few clubs are fortunate enough to finish the league as the winners. For instance, in the English Premier League (EPL), only six teams have finished as champions winners while in the NBA 20 teams have won the title. This clearly shows that there is more parody and competition in the NBA as opposed to top soccer leagues.

The NBA’s system of fielding and constructing a team is much different. NBA teams utilize the draft and free agency to get players and, unlike the Premier League in England, each NBA team has a salary cap to adhere to when purchasing players.

Most basketball fans might argue that watching soccer is boring. Why is that? Many soccer matches end as a 0-0 draw, meaning that both teams can go for a whole 90-minute period without scoring. Of course, this takes away the thrill of the sport. Soccer fans will argue that it is the most beautifully played sport in the world but some arguments fall on deaf ears when non-fans see some of the scores of soccer games.

On the other hand, basketball is a constant game where teams have a shot clock and run up and down the court at a much faster pace than soccer. Games are much higher scoring and no one in soccer can catch an alley-opp and dunk the ball in one of the most exciting plays in all of the sports.

In my opinion, basketball is more entertaining than soccer making it a better product in my eyes. This type of argument is always going to be subjective but if I had to choose between watching a high-level soccer game or high-level basketball contest, I would choose basketball every time.

Basketball might not be as universal as soccer, but I think it is more enjoyable and better than soccer. Nothing is more exciting than attending an NBA game live. The players are so close and the fans are almost in on the action. This is simply the opinion of one person but the arguments I laid out make a pretty convincing argument in favor of basketball as the clear cut winner.

So, which do you think is better? Soccer or basketball? Let us know in the comment below.