5 Best Basketball Camps in the USA 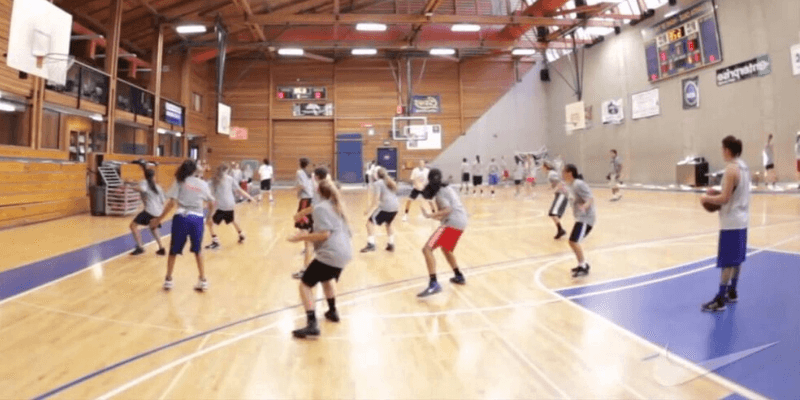 If you are interested in being a better basketball player, you need to develop and work on your skills. These include shooting, dribbling, defense, off-ball movement, basketball IQ and dozens more.

While you can self-learn these skills over time with practice, that isn’t always the most efficient, and you may not always trust the information you’re getting on how to improve. One of the best ways to learn and build important skills is to attend basketball camps.

These camps connect you with outstanding coaching and leadership to help you improve a wide range of skills. While you might think basketball camps are just for children or youth, that is not the case. There are plenty of camps out there that can help you improve on the court and reach your full potential, no matter your age.

Nike is one of the most recognizable and powerful brands in basketball, so it is no surprise that they put on a great camp. If you want a basketball camp with a lot of options, this could be the one for you.

Nike offers introductory camps, shooting camps, overnight camps, day camps and much more. There are even camps that let you work with former or current NBA and WNBA players. One of the best things about Nike camps are the quality of coaching and instruction you will get.

The coaches at many camps include Division 1 NCAA coaches, former professional players and many more. They also operate in nearly every state and also offer international camps as well. So no matter where you are, there is likely a Nike basketball camp close.

These Nike camps are also great for all ages. They can help new ballers get introduced to the game, but can also help high school players work on their confidence and skills to land a coveted college scholarship.

For the last few decades, PGC (point guard college) basketball camps have helped thousands of players improve a variety of skills. While the name may have you believe it’s for point guards only, that’s not the case.

In fact, any type of player can benefit from a PGC camp as long as you are determined and willing to work. PGC basketball camps operate in a number of different states and they have over 100 camps all over the country.

These camps include Shooting College, Playmaker College, Scoring College and more. Each will teach you high-level and useful techniques and knowledge. There is even a PGC Grad School, which is great for college players looking to master their game and take it to that next level.

While many of the PGC basketball camps are aimed at youth in high school and college athletes, there is also the Skills Academy camps for those as young as the 4th grade. No matter your age or skill level, you should be able to find a PGC camp that’s right for you.

Since the early 1970s, NBC (Northwest Basketball Camp) has been among the world leaders in the space. Whether you are in elementary school, junior high or high school, there is an NBC basketball camp for you.

These camps are offered across the USA, as well as in Canada and even the UK. They are incredibly well-respected and can help anyone improve. The camps they offer include 1 or 2 day clinics, team camps, overnight camps, and college prep camps, just to name a few.

NBC can assist you in becoming a better scorer, learning new defensive skills and moves, work on your ball handling and even become a leader on and off the court. They aim to provide you all of the tools you need to succeed in basketball and in life.

The National Basketball Academy (also known as TNBA) partners with NBA teams like the Bucks and Pacers to provide camps, clinics, and training for basketball players of all ages. TNBA operates in Milwaukee, Orlando, Houston, Indiana, and Cleveland. They also conduct basketball operations in many other nations around the world such as Brazil, France, Argentina, and Spain.

With so many clinics, camps and training opportunities all year, working on what you need to improve on is always easy. Their camps and clinics range from a single day to multiple weeks, helping you work on anything and everything under the sun.

They also host various tournaments and leagues so you can show off the skills you have learned. If you want to develop your skills, work on situational techniques and drills, and simply become a better and more intelligent player, TNBA is a good option.

Currently, Breakthrough Basketball conducts eight different types of basketball camps across 270 locations in the United States and Canada (from March to October). Their coaches range from successful high school coaches to NCAA and NBA coaches.

These camps include Shooting & Ball Handling, Finishing, Elite Skills & Playmaking, Offensive Skills, Decision-Making, Essential Skills, Attack & Counter, and Leadership. There is even a camp called “Littles” for the youngest of players. You can select the camps that are closest to your city of residence as they are located in most major cities. You’ll have no problem finding a camp that’s right for you year after year.

Besides helping these ballers grow their skills and athleticism, Breakthrough Basketball is also recognized for their power-packed training, positive impact coaching, competitive play, and character development – going a step beyond your typical fundamental camp.

Do you know about (or have attended) a basketball camp that you think deserves a spot on this list? If so, don’t hesitate to leave a comment below.