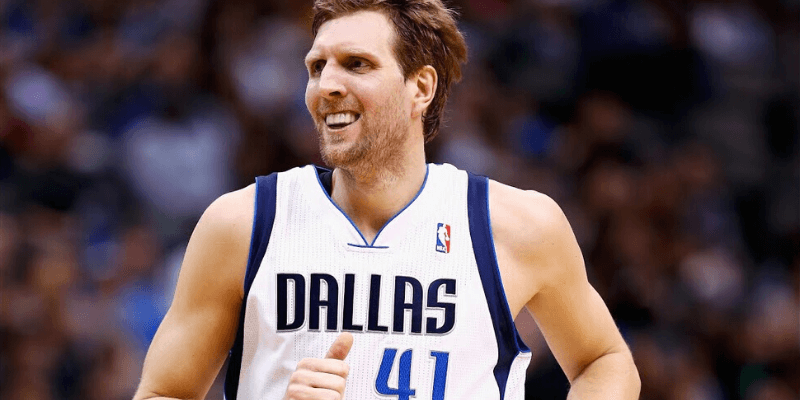 The NBA is full of the best basketball players on the planet. While the majority of the best NBA players have come from the USA, Europe has also proven to be a hotbed of basketball talent. Europe has produced many NBA champions, a few MVPs and countless All-Star caliber players.

But who among these many European NBA players are the best? If that is a question you have, you have come to the right place. This article will look at stats, skills, awards and more to decide who some of the greatest and best European players are.

It is very hard to argue against Dirk Nowitzki being the best NBA player to ever come out to Europe. Hailing from Germany, Nowitzki was the first-ever European MVP when he won the award in 2007.

A few seasons later he led the Mavericks to their first-ever NBA championship as well. Add to that the 14 times he went to the All-Star game and there is no doubting Nowitzki is one of the best. He was best known for his incredible offensive game, his signature fadeaway jumper and his 3 point shooting.

While it is now common for 7-footers to have range, this wasn’t the case when Dirk was in his prime. He regularly averaged more than 20 points a game and led his team to the playoffs time and time again. This list wouldn’t be complete without his addition.

Before coming to the NBA in 1989, Petrovic was already among the best basketball players on the planet. He dominated throughout Europe from the time he was a teenager up to his early 20s. Once he arrived in the league and found his way to the Nets, he continued to play incredibly well.

He was a very efficient scorer and a leader on the court for his team. Unfortunately, once he was starting to reach his prime and be seen as one of the best guards in the NBA, Petrovic passed away in a car accident. This happened in 1993 when he was only 28 years old. This news devastated basketball fans around the world.

Had he not passed away, he would have surely continued to improve his already-impressive 20 points per game average. While he didn’t play in the NBA as long as many other Europeans, there is no doubting he was one of the best NBA players to come from the continent.

Similar to Petrovic, Arvydas Sabonis had an impressive career in Europe before eventually coming to the NBA. He won numerous awards both in Europe and during international competition. While he was drafted into the NBA in 1986, he didn’t play his first game in the league until nearly a decade later, due to injury and many other conflicts.

Despite not coming into the NBA until past his prime, he still played remarkably well, especially considering his injury history. His numerous injuries hurt his explosiveness and limited his mobility. Even still, he shot the ball well and was an incredible passer for someone who was 7’3.

If Sabonis would have come to the NBA in his early 20s, there are many who think he would’ve been the best European player ever by a mile. Not only that, many think he could’ve been a top 5 center of all time. His son, Domantas, is now playing in the NBA and is one of the best young bigs in the league.

Born in Spain, Pau Gasol was one of the best and most versatile big men of the 2000s. Gasol was all you wanted out of a center or power forward as he scored efficiently, got a lot of rebounds, blocked a lot of shots and was an underrated passer. Gasol won two NBA championships during this career, each with the Los Angeles Lakers.

In addition to his team success, Gasol had plenty of individual success, making 6 NBA All Star Games and 4 All NBA teams (two 2nd team and two 3rd team). He was also one of only three non-American players to win the Rookie of the Year. He was a double-double machine during his prime, and is essentially ambidextrous on the court, which makes defending him a nightmare.

While he is still only 24 years old, Giannis has already proven himself to be one of the best European players in league history. The “Greek Freak” is the most recent NBA MVP and can basically do it all on the court. He is tall, can play defense, can handle the ball and can move with blistering speed.

His offensive moveset is also quite polished and his drive is potentially the most difficult to deal with in the league. He will fill up the stat sheet every single night and is the only player in NBA history to finish in the top 20 in points, rebounds, assists, blocks and steals in an NBA season.

You would be hard-pressed to find a more complete player in the NBA right now. The sky’s the limit for Giannis, and there is no telling how many accolades he will have to his name in a decade or so.

There have been many incredible players that have come from Europe, but these five are among the best. Whether they were scoring buckets, winning titles or putting their country on the basketball map, you can bet these players were making a major impact during their time.

Do you believe there is a European NBA player that we missed and you feel he deserves a spot on this list? If so, leave us a comment and let us know!