5 Best NBA Coaches of All Time 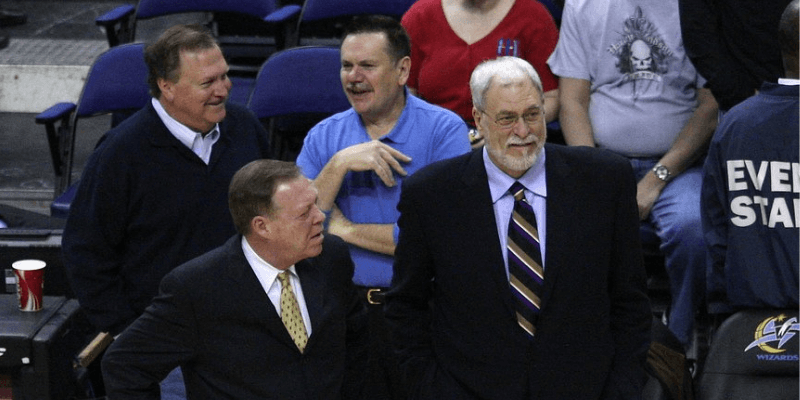 Coaches come and go in the NBA on a regular basis. However, some have much more staying power than others, and are considered by many to be the best of the best.

Let’s take a look throughout NBA history and pick the best NBA coaches of all time. There have been many who were thought of as good, but how many were truly great? Let’s find out.

People can say what they want about Phil Jackson, but he is without a doubt the greatest NBA coach of all time. Yes, he had Michael Jordan for their magical run in the 90s. And then he had Kobe when he coached the Lakers. But there are plenty of great players who have never even won a single championship, so the coaching without a doubt plays a big role.

Using the triangle offense and taking the league by storm, Phil Jackson leveraged the talented Bulls and Lakers teams to crush the competition on his way to 1,155 wins and an incredible win percentage of over seventy percent!

While he has been questionable in his front office abilities, he was always a fantastic coach, and the stats simply speak for themselves.

The man who has coached the Spurs since the mid-1990s has always been a well-respected figure in the NBA. The reason is simple; all he does is win. No matter what lineup Pop puts out on the floor on any given night, opposing teams know that they have more of a chance to lose than they do to win.

5 championships, multiple time Coach of The Year winner, and draft aficionado are all things that define Greg Popovich. He has developed some great talent and traded for some as well. He could be the greatest coach of all time for getting players to play at their maximum potential at all times.

If only he had more than 5 championships, he would be fighting Phil Jackson for the greatest coach of all-time honors.

A true innovator and a huge influence on making the game what it is today is longtime Boston Celtics coach, and later front office executive, Red Auerbach. Red changed the game with his fast-break offense, and a focus on team play and defense.

Winning an astonishing nine championships in the span of ten seasons was the pinnacle of Auerbach’s career. The Celtics were without a doubt the team that dominated the fifties and sixties, and Red Auerbach was the cause of their massive success.

He went on to be a great front office executive, winning 7 more titles during the Celtics successful runs in the seventies and eighties. Everything Red touched seemingly turned into a winner, and thus it gives him the third spot on the greatest coaches of all time.

It is only fair that we put Pat Riley on this list right after Red Auerbach. The “Showtime Lakers” of the 1980s were the team that topped the Celtics as the greatest dynasty of that decade. The coach of those Lakers? Pat Riley.

After Riley won his last championship with the Lakers in 1988, he would not see another championship trophy come to his team until the year 2006 when he was coaching Dwayne Wade and the Miami Heat. This is a testament to not only his extremely long tenure as an NBA coach but his consistent winning formula.

You can’t make a list of top coaches in the history of the NBA and not put Pat Riley in the top 5, and we think he fits in perfectly at the number four position.

The fifth spot on this list could have gone a couple of different ways, but Chuck Daly is the best pick for this position. He coached the back-to-back champion “bad boy” Pistons, being a hard-nosed coach that really resonated with his team.

While the bad boys like Isaiah Thomas and Joe Dumars handled the winning on the court, Daly kept them in check as best he could off it. He also promoted a strong defense over a flashy offense, and would rather pound the ball into your team than go behind the back and around.

He was the epitome of the grit-and-grime era of NBA that was being played during this span, and another innovator of the game.

We think we nailed the top four spots on this list. The fifth spot could be argued that other coaches such as Jerry Sloan or Larry Brown deserve to be there. We wouldn’t disagree, but Chuck Daly’s resume is just too good not to plug him in there.

What do you think? Would you like someone else to be in the five spots on this list? Let us know in the comments below!