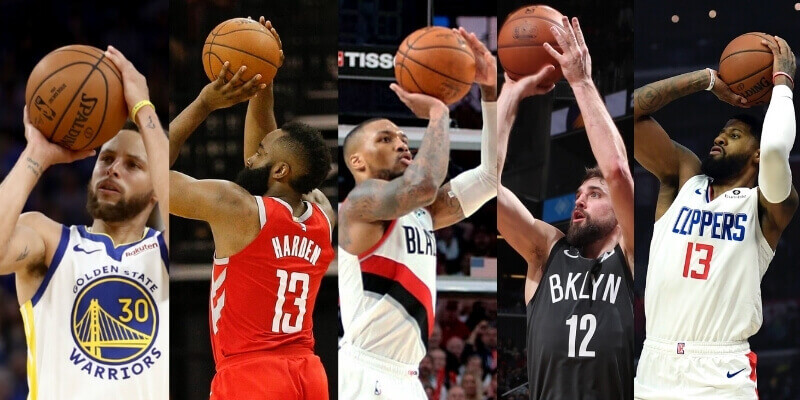 For better or for worse, the NBA is in the age of the three pointer. More and more players continue to improvise their long range shots each year, and they show no sign of slowing down. That high-flying offense is one of the reasons current basketball is so fun to watch.

I’ve been playing and watching basketball for over two decades. In that time, I witnessed the game transition from a two-point focused affair to a more high scoring game. I understand why that shift happened, as well as the players that were behind it.

In this article, I go into great detail about the current best three point shooters in the NBA by looking at their stats and various achievements. That information, backed by additional anecdotes, helps explain why they rise above the pack.

The Age of Long Range

In an age of three point shooters, it’s getting harder and harder for guards to stand out. That doesn’t mean there aren’t amazing long-range threats, it just means the competition is getting tougher with each passing year.

The following players aren’t just amazing on the stat sheet, they also have outdone themselves in terms of larger achievements within the league. That combination is what makes them all such great players.

There is no three point shooter in history like Steph Curry. Not only is he undoubtedly the greatest long range threat to ever step on the court, but he’s also the single season three leader and easily the most dangerous scorer in the current NBA.

Curry has shot a staggering 43 percent from beyond the arc for his career and currently has the second most three pointers of all time despite having played nearly half the basketball as the current leader, Ray Allen. There’s almost no doubt he’ll get to the all-time mark eventually.

What puts Curry over the top is that his three shooting is the reason the league shifted their focus to long range shots. He completely changed the game, and is so lethal that most other stars emulate what he did.

While not as accurate as some of the other players on this list, shooting somewhere in the mid 30th percentile from beyond the arc, James Harden is an incredible scorer. In fact, he led the league in points for three straight seasons before joining the Nets last year.

He has one of the quickest pull ups in the league, which allows him to bury long range shots at an impressive clip. Not only that, but he’s a versatile threat as well. He can score in a myriad of ways, which makes guarding him outside even more difficult.

In fact, his ability to score off the dribble is what puts him on this list. Even if his individual stats don’t quite stack up to some other players, no one in history has more unassisted three pointers than Harden and his impressive beard.

Every basketball fan has undoubtedly heard of “Dame Time,” so it should come as no surprise that Lillard is one of the best shooters in the current NBA. He, along with Curry, helped usher in the shooting revolution and brought incredibly long range shots to the forefront of the league.

What makes Dame so great is his combination of volume and accuracy. Where some players are only good at one or the other, he shoots a lot of threes and doesn’t miss that often. He shoots just below 40 percent for his career and averages almost 25 points per game.

Those numbers are continuing to improve as well. While he started off a bit slow, he averaged 28.8 points per game last season and shot 35 percent from downtown. He’s a lethal shooter and one of the most clutch players in the game.

While not as high profile as the other players on this list, or even the ones on his team, Joe Harris is deadly from 3-point land. The rather unassuming player doesn’t average too many points a game, but when he shoots he rarely ever misses.

The reason Harris ranks among the best shooters is his accuracy. He shot a staggering 47.5 percent twice over the last three seasons, all while averaging around 14 points a game. Those stats don’t make him a star, but they easily place him as a strong role player.

Harris is not flashy. Even so, he made 183 threes two seasons ago and continues to make more and more a game with each passing year. He made over 3 a game last year, firmly cementing himself as a key part of the Nets’ dangerous spread offense.

While he has never been known as a pure three shooter, Paul George’s long range game only gets better each year. A versatile player, his three point percentage has gone up every season with great efficiency. He went from shooting 30 percent to more than 40 over the last two years.

Not only that, but he’s making a ton of threes in the process. He shot almost eight three pointers a game last year and made nearly four of them. Looking at those stats, it’s no wonder he’s such a critical part of the Clippers recent rise to greatness.

Three pointers are critical to today’s NBA, and the five players on this list are a big reason why. They each have helped usher in the new shooting style, and they have done so with lethal efficiency. Nobody can put up points in quite the same way.

Though not everyone is a fan of the deep threat offenses so prevalent in today’s NBA, there’s no denying that the five players in this article have changed the game forever. They aren’t just good at what they do, either. They’re also incredibly fun to watch.