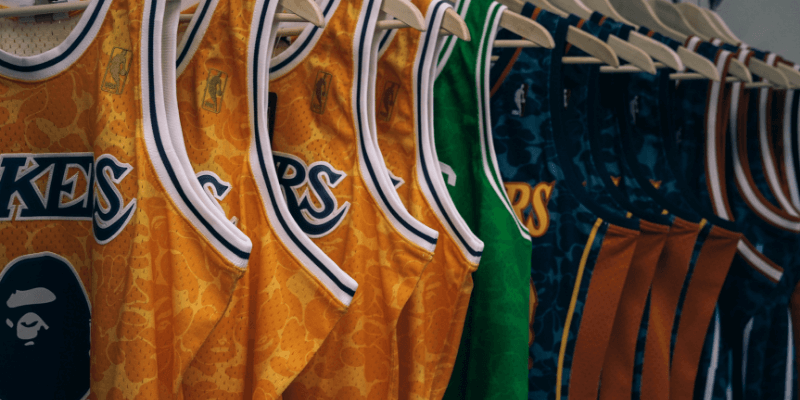 So you’re sick of the newest NBA jerseys and long for your childhood once again, you should definitely check out the NBA throwback jerseys on the market. They look exactly like you remember, and are sure to bring back tons of memories of a happier time.

We have listed some of our favorite throwback NBA jerseys in this list, as well as why we think they would make a great addition to your game day wardrobe.

Who Should Get This?

If you are nostalgic about how great the NBA was in the past, then these jerseys are for you. Missing the days of Jordan, Bird, Magic, and more is a real problem for people who got to see their greatness. Now you can relive it again by picking up one of their throwback jerseys.

If you are a younger NBA fan and missed these previous eras and their awesome jerseys, throwback jerseys are a great way for you to rock your teams’ colors from the past. They will also get you a bit of street cred from the old dogs.

The man who scored over a hundred points in a game, what is not to love about this blast from the past? The massive spacing between the numbers and that oh-so-recognizable purple and gold are sure to catch the eye of anyone around.

Ah yes, the red, white, and blue. The 76ers patriotic colors ring loud here, and they look great with Dr. J’s name on the back. The proud number 6 and the Sixers font make the front look clean and mean.

Clyde “The Glide” was lucky enough to don this majestic jersey during his playing career. From the recognizable lower case lettering to the white and black stripes, this jersey is truly a thing of beauty.

No throwback jersey list would be complete without one of the “Showtime Lakers.” Magic Johnson is the name that tends to live on from this era, and this jersey just harkens back to their magnificent run of championships in the 80s.

It’s only right to follow up the Magic Johnson jersey with his “nemesis” Larry Bird. Their epic showdowns in the 80s are only rivaled by the showdown of their throwback jerseys. The green of the Celtics jersey just pops with the white accents. A classic jersey in the truest sense of the word.

The finger-wagging shot-blocker put fear in the hearts of all who came into the lane during his career. This epic throwback jersey from the early 90s is one of the most iconic jerseys of all time. The mountains and skyline in front of the rainbow stripes make an extremely magical jersey the likes of which haven’t been seen since.

The classic Orlando Magic logo is right across the chest of this memorable jersey. During the Anfernee “Penny” Hardaway and Shaquille O’Neal era, they brought worldwide recognition to the blue and white pinstripe jersey that have been lauded as some of the nicest in NBA history.

Following Penny Hardaway with Shaquille O’Neal seems like the logical thing to do. When Shaq left the Magic and headed to Los Angeles to join the Lakers, his new jersey instantly became a must-have. That still holds true today, as this Lakers’ jersey harkens back to a young Kobe and Shaq running through the league.

One of the most polarizing jerseys in the history of the sport, the “old school” Raptors jersey is definitely memorable. The cartoon raptor in the middle of the chest goes nicely with the ripped looking pinstripe accents. The colors look amazing, no matter what your feelings are for the rest of the design.

If you miss the Seattle Supersonics as much as we do, then this Kevin Durant Supersonics jersey is a must buy. The team that should have never been moved will forever live on in our memory as the greats such as Shawn Kemp, Gary Payton, and Kevin Durant hooped hard for the city and all the people there.

After a wear or two, you are going to wash your jersey to keep it fresh. We highly suggest you don’t just throw it in the washing machine, as this could cause permanent damage. Handwashing with soap and water in the sink will be your best option.

If you accidentally spill something on your jersey or stain it, there are a few ways you can take care of that. One of the best ways we have found is just like what is done in this video:

There are a ton of old jerseys that simply look more clean and nice to the eye than newer renditions. If you are dying to get your hands on some, they are definitely out there!

Which classic jersey is your favorite? Why? Let us know below!