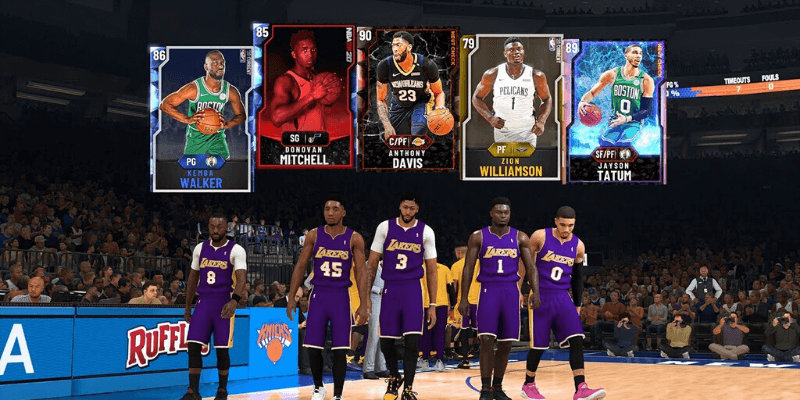 While there is nothing quite like getting on the court and playing basketball in real life, video games have gotten pretty close. NBA video games today offer an incredible experience and life-like graphics that can make you feel like you’re right on the court with your favorite NBA stars.

Of course, if you want an exaggerated and arcade-focused experience, you can find that in droves as well. These games have evolved a ton in the last decade and offer gamers an endless supply of things to do and try out.

But which are the best NBA games that offer the most to gamers? While there are a ton of basketball games out there that can be played (including some that can be played for free online), we are only going to look at the ones that focus on the NBA itself.

Without any further ado, let’s take a closer look at a few of the best NBA video games you can play today.

The king of NBA games is currently the 2K franchise. It sells more than any other NBA video game and for good reason. The newest iteration of the series, NBA 2K20, just released in early September 2019. NBA 2K20 offers NBA fans a boatload of different modes and options to try out.

You can create your own player and take them through their career in MyCareer and become an MVP or NBA champion. There is also the option to be a GM, control your team and go through a realistic simulation of the NBA in MyLeague or MyGM. You can also go online to compete against people from across the globe.

There is also the option to build your own team from scratch with a wide range of current and former NBA stars in MyTeam. In addition to the many modes, the gameplay in NBA 2K20 is high quality and feels as authentic as any NBA game ever. There is a lot of potentials to craft and customize the experience, as well.

No matter what you want out of an NBA game, there is a good chance that NBA 2K20 can satisfy your needs. Of course, playing older versions of the game such as 2K18 or 2K19 is certainly an option as well.

If you are not a fan of the 2K series and want something different, the NBA Live series is a great alternative. It is a similar game in most respects, but there are some subtle differences. For example, the presentation in NBA Live is unmatched. Halftime shows, stat overlays and the soundtrack are all incredible.

Like NBA 2K20, there are many different modes and options. You can play online, create your own dynasty and play through an in-depth and incredible career mode called “The One”. Like NBA 2K20, the gameplay in this game is quite polished and the graphics look great.

While this franchise is no longer as popular as 2K, it is a great alternative if you need a change of pace or are a huge fan of the presentation in your NBA video game. Also, with the launch of NBA 2K20 being questionable and many not loving the “grind or pay” to succeed in MyTeam or MyCareer, this is a good alternative for you.

You may be wondering why we are comparing 2K20 to Live 19, but there is a good reason for it. NBA Live 20 has been postponed a little bit, but is supposed to release before the end of 2019. Once that comes out, there is a good chance it will build on what NBA Live 19 already does right.

Also Read: NBA 2K vs NBA Live – Which One is Better?

Both NBA Live and NBA 2K are largely simulation games. They are meant to simulate or replicate the real-life experience of the NBA. This is in terms of graphics, gameplay, stats and more. However, not all great NBA games follow the exact same script. NBA 2K Playgrounds 2 is an arcade-style game that is 2v2 instead of the standard 5v5.

The game is very fast-paced, yet incredibly simple to play and get a hold of. You can still play as your favorite NBA players and teams, but they will be capable of doing things you’ve never seen before. There are a variety of different courts to play on, difficulties to master and many modes to get lost in.

The game features a season mode, online mode and so much more. While you might think a game like this would get stale, there is enough content to keep you interested for a long time. Think of this game as a more modern and polished version of the legendary NBA Jam series of games.

We are sure that at least one of these NBA video games will be able to satisfy your basketball needs when you can’t get on the court yourself. Whether you want a simulation-style game, an arcade-style game or just want to run your own team, these games can help.

Of course, be sure to read reviews or check out some videos before making the decision on which you should play.

Do you have another NBA video game you love to play that isn’t included in this article? If so, let us know about it in the comments down below.