What Is Big3 Basketball? 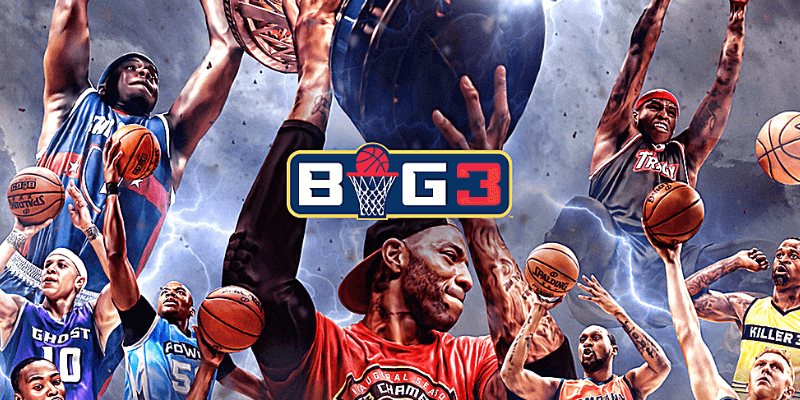 In 2017, Ice Cube (yes, that Ice Cube) and entertainment executive Jeff Kwatinetz started a basketball league. The Big3 was an atypical basketball venture as it promoted a 3-on-3 half-court game as opposed to the traditional 5-on-5 full-court sport. The league never intended to compete with the NBA and proved complementary to the game, with their games even being played at NBA arenas across the country.

The league has a little something for everyone: former NBA players, fast-paced play with exciting rules, big-name coaches, and a chance to catch a game during college and NBA basketball’s offseason. This article will give you a better idea of what this little upstart league is and give you a glimpse into the world of modern 3-on-3 basketball as you have never seen played at your local playground.

Not Your Average Basketball League

Like we mentioned earlier, the Big3 consists of teams that compete in 3-on-3 half-court basketball games. Each team is a mix of former NBA and international players but co-founder Ice Cube has made crystal clear during his promotion of the league that the Big3 is not intended to act as a “seniors” league for aging stars. In fact, the league just dropped their age-limit to 22 years old to attract younger, stronger, and faster players.

Aside from the traditional two and three-pointers, there are three 4-Point Zones on the court for an added wrinkle to the game. Makes the closing possessions much more exciting if your team can hit a game-winning 4-pointer.

Each team competes in an ultra-competitive 4-point shootout to determine who is the home team and gets the first possession to start. Imagine the NBA incorporating that into the pre-game festivities.

Another huge rule change announced in 2019 was not only the team’s ability to challenge one foul call per half but the way in which they would challenge. If a team disagrees about a foul they will compete in a one-on-one possession against the opposing team. If they win, the call is overturned and they retain possession.

When the league formed they stressed the importance of an exciting product. The 14-second shot clock, 10-seconds shorter than the NBA’s 24-second clock, ensures more possessions for each team and a healthy sense of urgency for each team to get a shot off quickly rather than holding the ball too long.

We have seen instances in the past of alternative leagues sprouting up trying to either compete with or ride the coattails of their more successful counterparts (see, the XFL). The Big3 never claimed to be the same or better than the NBA and the half-court 3-on-3 format is a great way to differentiate their league while still playing the same sport of basketball that their fans all love.

In the league’s first year of competition in 2017, they averaged 11,000 fans at each event even securing broadcast rights from Fox Sports. 2019 saw the league move to CBS Sports, showing the interest in airing Big3 games by multiple networks.

Joe Johnson was a feared journeyman scorer in the NBA from 2001 to 2018 before leaving the league to move home and care for his sick mother. When she passed, Johnson was looking for a way to deal with his grief and decided his basketball career wasn’t over, so he joined the Big3.

Johnson became somewhat of a viral sensation torching most teams during his one infamous season in the Big3. He led his team to the Big3 title, won league MVP, and averaged 22 points per game. His play in the Big3 was noticed by the NBA executives and he parlayed hi time in the 3-on-3 league into a one year contract with the Detroit Pistons in 2019.

The exposure and success of Johnson’s one season in the Big3 showed fans and critics alike that the league wasn’t always a step down from the NBA but a different platform for players to express themselves through the game of basketball.

A League Filled With Big Names

The Big3 is a who’s who of players and coaches from yesteryear that continue to have some basketball left in the tank.

We touched on Clyde Drexler’s involvement in the league as Commissioner and he is joined by other well-known players from the ‘80s in leadership roles. Gary Payton, Charles Oakley, and “Dr. J” Julius Erving all coach a team in the league. Famous women’s basketball players like Lisa Leslie and Nancy Leiberman Klein also coach teams, with Leslie winning the 2019 championship behind the stellar play from Joe Johnson.

Not to be outdone by the league’s coaches, the players have seen loads of success during their prime playing years. With 25 years of NBA experience between the two of them, Amar’e Stoudemire and Nate Robinson are teammates in the league. Controversial former NBA superstar Gilbert Arenas is also in the league under the tutelage of coach and former Pistons Bad Boy Rick Mahorn.

Even though COVID-19 changed the course of the Big3’s 2020 campaign, the league has no plans to fold and is ready for the next time it can showcase its talented and exciting players and coaches. These opportunities clearly show that the league is continuing to see a growth in popularity each year and expects the same uptick when they resume competition.

Their marketing and exposure is also a league highlight. They secured a multi-year endorsement deal with adidas in 2018 which includes merchandise and a partnership on working with player development and grassroots efforts.

The league also began Young3, a 3-on-3 league for youth being run in participating Boys and Girls Clubs of America. The leadership at Big3 is looking to make this experience something bigger than just a basketball league. Cube and Kwatinetz want to build a culture and brand around Big3 that competes with the big boys for years to come.

Are you a fan of the Big3? If so, who is your favorite Big3 superstar? Let us know below in the comments section!

My famous superstar is Will Fogarty