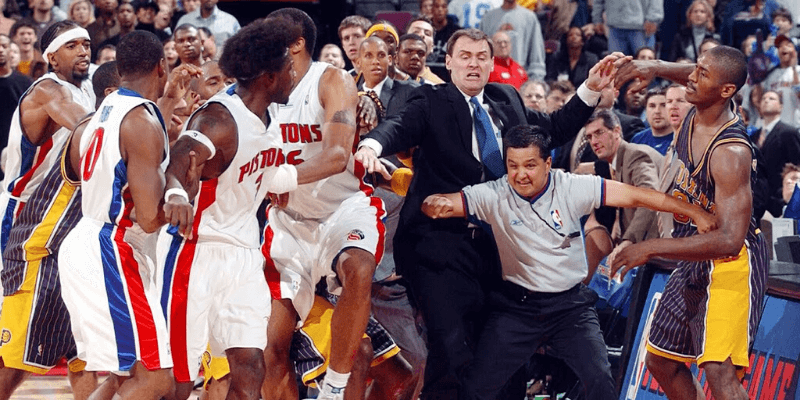 When you watch a hockey game, you expect to see the occasional fight. However, that isn’t the case when watching the NBA. Fighting is not allowed, but that hasn’t stopped hundreds of players from engaging in fisticuffs over the years.

Sure there are some shoving matches here and there, but true NBA fights are few and far between. However, there are those few times where tempers and emotions boil over and we see a brawl. While fighting is prohibited and not a good look most of the time, there is no doubting a fight can add some excitement to a game that few other events can add.

1. Malice at the Palace

This is far and away the biggest and most famous fight in NBA history. The Malice at the Palace is a name given to the fight that occurred in late 2004 between the Indiana Pacers and the NBA champion Detroit Pistons.

After a hard foul late in the game by Ron Artest on Ben Wallace, some shoves were exchanged. But once a fan threw a beer on Ron Artest, you know what happened next. Artest charged into the stands and this began a melee between players and fans, right in the stands. It was truly a dark day for basketball.

The fight resulted in numerous lengthy suspensions, fines and led to many people (both players and spectators) to be charged with assault. The fight led to many changes in the NBA, such as limiting the amount of alcohol being sold and led to more security between players and fans.

Alonzo Mourning and Larry Johnson are two big and strong players, and they went at it in one of the most spirited fights you’ve ever seen in the NBA. The two had bad blood for years (dating back to their time as teammates) and the stars aligned during a playoff game in 1998.

After a few shoves, the two started throwing a flurry of fists. Most of them ended up missing, but there have been very few times we have seen this many punches thrown in an NBA fight. For this to happen in a playoff game with so much on the line also makes it extra shocking.

However, arguably the most memorable and insane part of this fight was Jeff Van Gundy hanging off Mourning’s ankle throughout the scuffle. Gundy was coaching the Knicks and for whatever reason, thought he should thrust himself right in the middle of this heavyweight fight.

With how aggressive and passionate these two players were on the court, it is no surprise to see them square up and fight. During a game in 1990, Laimbeer shoved the ball in the face of Rick Mahorn after a basket, and Barkley took offense to it. You can guess what happened next.

Barkley rushed over to Laimbeer and hit him with a pretty hard forearm shove. From there, the two of them traded punches back and forth while their teammates began to surround them. The two threw multiple punches each as the fight spread to the bench area.

Soon enough the two grappled and eventually fell to the ground, which led many of their teammates to become involved in the fracas. Fights were more common back in the 80s and 90s, but this one was still among the biggest of its era.

While this fight wasn’t quite as big as some of the others, the people involved in it make it impossible to leave off of this list. It is rare that you see many of the top 50 players of all time participate in a fight, but that is exactly what happened in 1984.

Some of the names in this fight included Julius Erving, Larry Bird, Moses Malone and Charles Barkley. The fight began when Dr. J and Larry Bird, who have a history, stood nose to nose after a physical foul. After a few seconds, the two started throwing punches, which prompted Charles Barkley to grab Bird and try to separate the two.

Unfortunately, instead of it ending here, Erving used that as an excuse to throw several more punches at Bird, who was being restrained. Once this occurred everyone jumped in and the Sixers and Celtics added another chapter to their storied rivalry, which still exists to this day.

It’s incredibly rare for a fight to take place during a game that is attended by the NBA commissioner, but that is exactly what happened during a 1994 game between the Bulls and Knicks.

Not only was the commissioner in the building, he was only a few rows up from the melee. The fight began when Jojo English and Derek Harper were face to face at the three-point line after a whistle. All it took was a single shove to set it off.

The fight eventually got to the sidelines and a body slam took the battle right next to the crowd. By this point, their teammates all jumped on the pile. These teams hated each other at the time, so you shouldn’t be surprised that tempers boiled over.

There you have it, some of the biggest fights in NBA history. While fighting in the NBA isn’t common, it does happen. These fights will surely be remembered for years, for better or for worse.

Do you remember a big NBA fight that belongs on this list? If so, be sure to let us know in the comment section below.