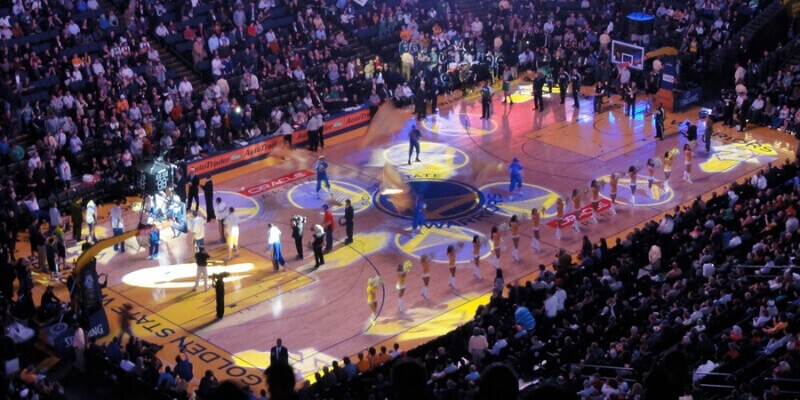 Basketball is one of the biggest sports in the world, and it only continues to get bigger and bigger with each passing year. More fans lead to more revenue, and they also lead to a need for more seats. That is why so many modern arenas are so large.

I have been a passionate basketball player and fan who has spent my entire life going to games. Those firsthand experiences, backed by additional knowledge about the NBA and its history, let me properly break down which organizations have the largest stadiums and why.

In this article, I will cover the NBA stadiums that can hold the most fans. I will also look at some of the largest arenas over time and cover how spectating numbers/trends have changed the way the league brings and seats people who come out to enjoy a game.

Regression to the Mean

Before getting into raw numbers, it’s important to note that most NBA stadiums are relatively close in size. The largest and smallest are only separated by a mere 3,330 seats (19.7 %) and the average capacity sits at 18,966.

That’s not a lot of fans compared to what other sports can hold, but it’s still a decent chunk of people. Especially with how densely arenas get packed.

As close as all of the NBA stadiums are in size, no single building can pack in more fans than the United Center in Chicago. Home of the Bulls, the 20,917 seat arena first opened in 1994 as a response to what would become one of the greatest dynasties ever.

Truly the house that Michael Jordan built, it’s a bowl-style building that gives everyone a good view of the game regardless of where they sit. It’s named after United Airlines and sits just outside the Chicago Loop right next to their old stadium.

What’s even more interesting is that not only is it the largest area in terms of seats, it also has the largest square footage. That has paid off for the organization. Despite their bad luck as of late, the Bulls continue to have one of the highest attendances throughout the NBA.

Right below the United Center is the Quicken Loans Arena in Cleveland. The large stadium has been home to the Cavaliers since 1994 as well, and it holds 20,562 fans. Despite that, it was one of the cheapest stadiums to build, costing just over $165,000 million.

The organization erected it to replace the old Richfield Coliseum, which sat 40 minutes outside of downtown Cleveland. Quicken Loans is now in the heart of the city, which makes it easy for fans to fill it up regardless if their team is pushing for a championship or a rebuild.

Not only was it packed during Lebron’s reign, but it accommodates all sorts of people. There’s a nursing room for mothers, as well as accessibility options for people with sensory sensitivity needs. It’s also quite sustainable, which is impressive considering its size.

One of the newer stadiums in the NBA, Little Caesars Arena (named after the well-known pizza chain) holds 20,491 seats. That puts it barely below the Quicken Loans Arena and United Center, but it is still in the same area when it comes to the total number of seats.

That capacity, mixed with an incredibly loyal fan base, allows them to pull in quite a bit of revenue each and every season. Their old stadium, the Palace of Auburn Hills, was the largest in the NBA for a long time.

Now, they share a space with the Red Wings and play in downtown Detroit. That fits the trend with other large stadiums and brings them to the forefront of the league.

Located in the heart of America, the Capital One Arena is yet another NBA stadium with a capacity that exceeds 20,000. Holding 20,356 fans, it’s a large arena that gets extremely loud and raucous during most exciting playoff or regular season games.

As with Little Caesars Arena, it’s a dual-purpose stadium that houses a range of different events. In fact, it was home to the Stanley Cup Finals in 2017, the NCAA East Regional, and 2001 All-Star Game.

The high-tech building was created as part of a big $9 billion redevelopment program that brought a lot of new business to the city. It still brings in many fans every year and helps generate revenue for the surrounding areas.

While this list is focused on the NBA, it would be hard to mention the biggest basketball stadiums without dipping into the NCAA. Though most college stadiums are much smaller, the Carrier Dome, home to the Syracuse Orange, holds a whopping 34,616 fans.

That’s not only much more than even the biggest NBA stadiums, it’s also over 11,000 seats larger than the second largest NCAA stadium, Rupp Arena in Kentucky.

The Orange are one of the most popular college teams, and the school made sure that all of their fans (students and spectators) can enjoy the sport when they want to get out and see some live action.

There is not a huge gap between the largest and smallest NBA stadiums. Even so, the ones that do reign supreme in terms of seats and square footage are definitely more impressive during an important game when the crowd noise really starts to build.

More seats also tend to mean more spectators, which then means more money. If an organization wants to up their sales, a shiny new stadium with plenty of seats is one of the best ways to make that happen.