Who Has the Biggest Shoe Size in the NBA? 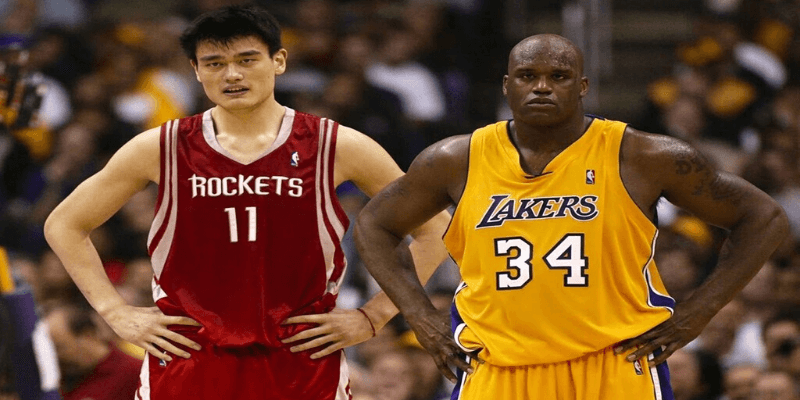 Basketball is dominated by larger than life players built like rocks. It shouldn’t come as a surprise that NBA players have some of the biggest feet in the world too.

In this article, we will shine some light on the players with the biggest shoe size in NBA history.

Let’s get right into it.

Shaq is a 15-time All-Star who is famous for his larger than life physique and propensity for his custom made lifestyle. He stands 7’1’’ tall, has huge hands and feet, and needs everything from his cars to his shower at home tailored to his size. While he is not the tallest player who has ever played in the NBA, he is tied for the largest shoe size in NBA history.

O’Neal understands the struggle of having to find things that fit him in life. In fact, in 2019 Shaq learned of a high school kid struggling to find shoes that fit him and bought him 10 pairs of shoes because he was in a similar situation when he was young.

By the age of 11, Bob Lanier’s shoe-size was already an 11. When he decided to try out basketball for the first time, he was brushed off by a coach who claimed that his feet would make him clumsy. However, Lanier’s Biology teacher encouraged him to get back on the basketball court after noticing that he had good physical attributes.

During his 15-year NBA career, he averaged 10.1 rebounds per game, 20.1 points per game and won an MVP Award. And his shoes grew to be a whopping size 22. One of his shoes was even displayed at the Basketball Hall of Fame to show fans the sheer size of Lanier’s feet.

Standing at 7’6’’ tall, Yao is a retired Asian NBA player who is just as famous for his height as he is his basketball ability. He retired in 2010 after suffering a foot injury, an ailment that plagued him throughout his career. Yao was an 8-time All-Star and lived up to the overwhelming hype he received coming into the league. He averaged 19 points per game and 9.2 rebounds and was the first foreign player to lead the NBA in all-star votes.

Many debates have sparked up amongst basketball analysts to discuss if Durant is the greatest player in the world right now. And it is hard to argue after the past three seasons he put up, winning two titles along the way. But one thing we are sure about— at size 18, Durant’s feet are some of the largest in the league.

At such a height, you shouldn’t be surprised that Jordan’s shoe size is 18. Jordan has a great reputation for being an efficient scorer, great at defense and also being a great teammate and team leader. He has averaged over 2 blocks per game in 4 seasons and posted a 70%+ field goal percentage for three straight years between 2014 and 2017.

Some call Jordan, in the twilight of his career, the most expensive “friend” on the Brooklyn Nets as he signed a $40M contract with the franchise. Many also believe that his being signed by the Brooklyn Nets played a huge part in them also securing Kyrie Irving and Kevin Durant in free agency.

Howard’s shoe size is 18. He is an avid rebounder with a career rebounding average of 12.4 per game. Dwight’s stats aren’t what they once were during his glory years with the Orlando Magic where he won an MVP and lead the team to the NBA Finals. His game does not match the pace and space of the modern era, and he has been unable to rely on strength as a style of play but he was a once-formidable force with some of the league’s largest feet.

While the size of a players’ feet doesn’t guarantee success on the basketball court it is hard to argue that fact after covering the above-mentioned players. We discussed the feet of several former MVP’s and current and future Hall of Famers. Maybe large feet has more to do with success than we give it credit for?

What is the largest pair of sneakers you have ever seen in person? Let us know your thoughts in the comments below.