How Many Rings Does Bill Russell Have 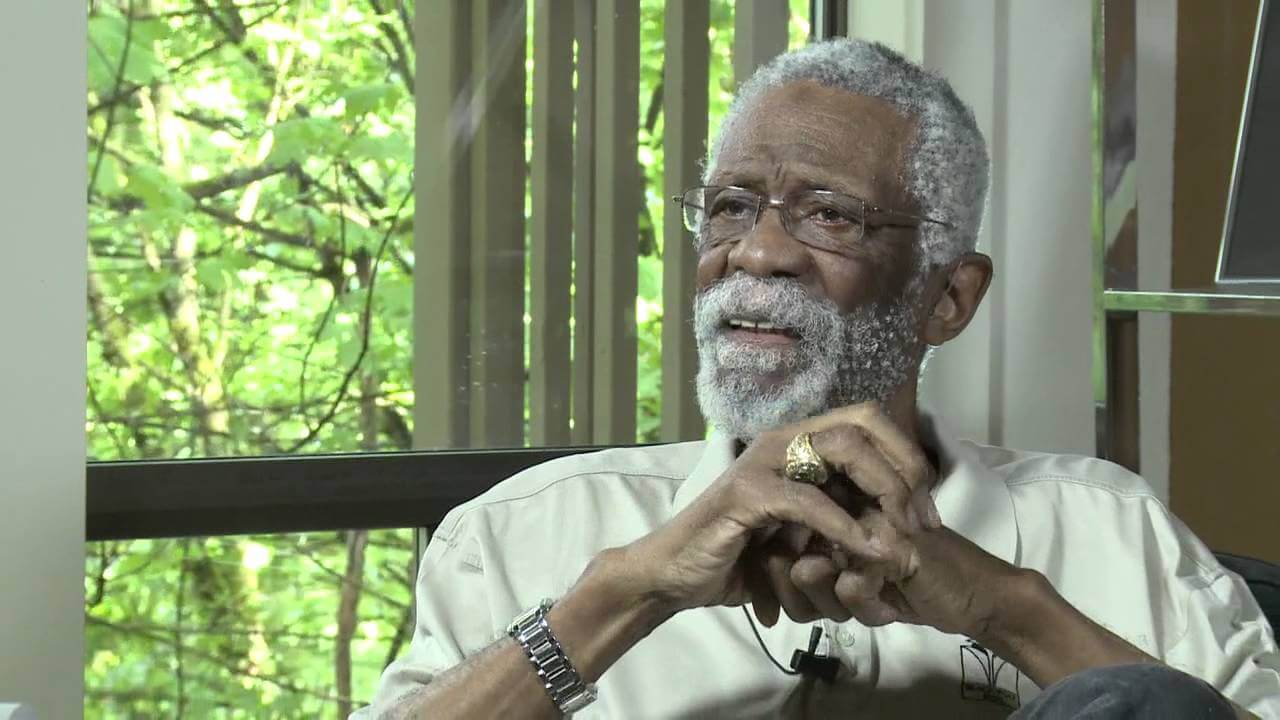 Bill Russell is literally the greatest winner in NBA history, earning 11 NBA rings in just 13 seasons! The star center could make you look silly on offense either by getting to the hoop or finding an open man for an easy bucket.

His defense, however, was the stuff of legend. It’s a shame the NBA didn’t record blocks as a statistic until 1973, four years after he retired because his case for greatest-ever would be more solid than it already is. Russell had a brilliant career, and this article is going to cover all of his championship seasons. Let’s go!

William Felton Russell’s basketball career began at the University of San Francisco. Russell wasn’t recruited by any major college program other than USF, but while on campus, he won two NCAA titles. He was so superior that the NCAA had to widen the paint before his junior season.

It didn’t take long for the Boston Celtics to come along after Russell graduated. After some maneuvering on draft night, the Celtics ended up with Russell, K.C. Jones, and Tommy Heinsohn. No one could predict that those three players would all be future Hall of Famers and hold 27 rings among the three of them.

Bill Russell’s NBA career is unmatched. He only played two seasons that didn’t result in a title—and in one, he got hurt while playing in the Finals. He also won a title as a player-coach for the Celtics in the final year of his career. It was an impressive feat in an era where the most successful player in league history could also act as head coach for his team.

Russell’s offensive game improved immensely from his high school days, where he couldn’t hit the broad side of a barn. Where he really stood out, however, were the other facets of his game.

He ranks second overall for rebounds in NBA history, behind only his rival Wilt Chamberlain, who played four more seasons than Russell. He was fortunate to play with several Hall of Famers in his day, so he never prioritized scoring.

As a rookie, Bill Russell put up veteran numbers for the Celtics. He only scored 14 points per game in the playoffs but stunned fans and critics alike, averaging 24.4 rebounds over the Celts’ 10 postseason games.

The Celtics had an easy series in the first round, sweeping Syracuse in three games. The St. Louis Hawks were one of the league’s best offensive teams, led by super-scorer Bob Petit, and wouldn’t fold easily. It took Russell and Boston seven games to edge out the Hawks—four games to three. Russell was an NBA champion his first year. You wonder if he knew what would happen over the next 12 years.

While 1958 was disappointing for the Celtics because they didn’t win the title, Russell did pick up the first of his five MVP awards before getting hurt in the playoffs. Russell’s 1958-59 campaign was strong again, leading the Celtics to a then-league record of 52 wins. Russell averaged 18 points and almost 27 rebounds in the first-round series against Syracuse.

They met the Minneapolis Lakers, who were no match for Boston in the Finals: they were quickly swept by Russell and crew, including Bob Cousy, K.C. Jones, and Tommy Heinsohn. Russ played killer defense all series and grabbed 30 rebounds per game for title number two.

The Celtics outdid their own record the following year, winning 59 games on their way to the playoffs. The 1959-60 season marked the debut of phenom Wilt Chamberlain, who immediately became Russell’s rival. They’d battle for the rest of their careers, and their legacies would be intertwined.

The Celtics handed Chamberlain and the Warriors a series loss. Russell played out of his mind, averaging 20 points and 27 rebounds (including a 39 rebound game!).

The Finals pitted the Celtics against the St. Louis Hawks yet again. The series went seven games, but the Celtics routed the Hawks in Game 7 for Russell’s third title in four years.

The 1960-61 Celtics had another strong season, winning 57 regular-season games. Russell put up 18 points and 24 rebounds, which helped earn him his second MVP trophy.

Boston faced the Syracuse Nationals again, allowing them only one win in five games. Like clockwork, Russell put up monster numbers in the series, averaging 21 points, 31 rebounds, and 5 assists.

The Celtics then found themselves against the St. Louis Hawks again. Russell played like, well, Bill Russell, putting up 18 points and 29 rebounds for the series on his way to his fourth NBA title.

The 1961-62 season was more of the same for the Celtics. This time, though, they faced the newly relocated Los Angeles Lakers in the Finals. From 1962 until 1966, the Celtics and Lakers would vie for the title four times, with the Celtics always coming out on top. Russell’s Celtics beat the Lakers in 7, and he shined bright again, scoring 23 PPG and 27 RPG for the series. In Game 7, he exploded for 30 points and 40 rebounds.

The 1963 Finals was a rematch from ‘62 with the same result: a Celtics title. Hall of Fame Celtics’ point guard Bob Cousy went out on top before retiring after the ‘63 Finals. An older, smarter Russell scored more to keep up with the Lakers’ explosive offense.

The 1964 Celtics looked a bit different than other years without Cousy, their floor general. Luckily, they had another good draft, selecting future Hall of Famer John Havlicek before the season. Russell’s familiar foe, Wilt Chamberlain, was relocated to San Francisco as his Warriors team relocated from Philadelphia. They found themselves facing each other in the Finals. The Celtics took the series easily; Russell again outplayed Wilt.

In 1965, Russell’s Celtics had to get past both Wilt, who now played for the Philadelphia 76ers, and the great Lakers team, including All-NBA talent in Jerry West and Elgin Baylor. The first round went 7 games, with the Celtics winning Game 7 in dramatic fashion. After a tough-fought Eastern Conference Finals, the C’s took it to the Lakers, winning 4-1.

In 1966, fans and the media began to see some cracks in Russell’s game. He was still great, but he failed for the first time in his career to average at least 23 rebounds. For most players, having one 23 RPG season would be a miracle, but Russell’s greatness trumped all competitors.

The Celtics’ ‘66 playoff foes were identical to the previous year. Boston beat Philadelphia handily, which set up a showdown for the ages against LA. The series went to Game 7, where Russell always rose to the occasion. This Game 7 was no different: Russell ended with 25 points and 32 rebounds.

Celtics great Red Auerbach retired after the 1966 season. Boston settled on Russell for his replacement after a vote of confidence from Auerbach. Bill Russell became the first-ever black head coach in NBA history. His first full year as coach ended in defeat, the first time that happened to Russell and the Celtics in nine years.

It didn’t take long for the Celtics to right the ship, though Russell’s game was clearly in decline. Boston beat the Lakers in 6 games for his tenth title. Russell was astounding in the Finals, averaging 17 points and 22 rebounds.

1969 saw Russell’s final year in the NBA. After disillusionment from the racial tensions he and his black community were facing in the late 60s, Russell couldn’t see himself playing much longer. The Celtics had their worst regular-season record since Russell joined the team. Destiny was on their side, however. They upset the Knicks and Sixers to set up Russell’s final clash with the Lakers, who had a new face on the team: Wilt.

The Celtics reached deep in the Lakers’ series and, while it wasn’t vintage Russell that we were seeing, he did enough to stifle Chamberlain and the rest of the Lakers’ stars. The series went 7 games, and the Celtics had enough in the tank to overcome being down two games to zero. Russell won his eleventh title in just thirteen years.

Bill Russell retired after the 1969 title performance at the age of 34. It was no coincidence that the following season, the Celtics failed to make the playoffs—for the first time since 1950. While Russell’s career ended abruptly and with controversy—he afterward cut ties with the Celtics and the city of Boston, citing racial discrimination during his playing days—his playing days would never be forgotten.

Bill Russell will go down in history as the greatest winner of the 20th Century in any sport and deserves to be in the conversation of best basketball player ever.

Have you ever seen footage of Bill Russell playing? What did you think of it? Let us know in the comments section below!