What Does The Black Stripe On NBA Jerseys Mean? 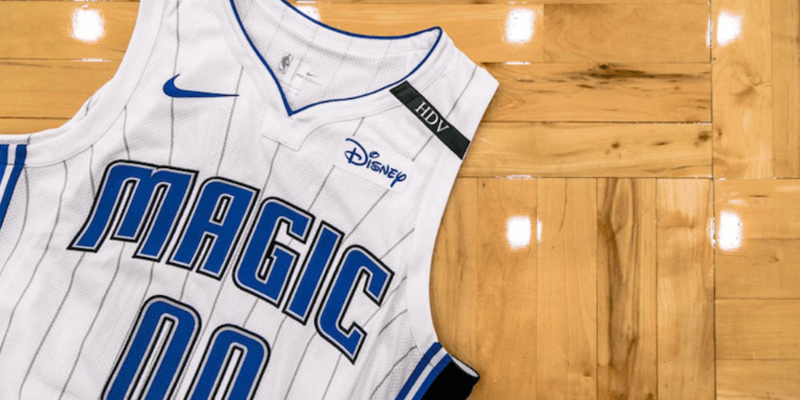 Have you ever noticed a black stripe on an NBA player’s jersey, usually located in the shoulder area? You will sometimes see a specific team wearing them and at times every player in the league may have them on their jersey. It kind of looks like they have a piece of black electrical tape stuck to their uniform.

These black stripes are no mistake and they are definitely not a piece of electrical tape. We can see that there is coordination between players and the league as to when they are worn. So what is the meaning of the back stripe that we often see on player’s jerseys?

It turns out that when a black stripe is worn on the shoulder area of an NBA Jersey, it is usually to pay tribute to an iconic figure in basketball who has passed away. Many times we will see a team wear the stripe to pay homage to an important player or person within the organization. When we see it league-wide then it is usually someone who had a huge influence on the whole league.

This marker, however, is not always used specifically for a basketball icon. The stripe has also been used at times to honor victims of a tragedy that may not necessarily be basketball-related but they are part of the community or a relative of someone within the organization.

The use of the narrow black patch on the uniforms commonly represents the loss of someone important to basketball and while it can be a sad thing, it is also meant to celebrate the life of people who made an impact on the game. The following are some instances where the black stripe has recently been used. Some of these people may not have played or been involved in basketball, but they were certainly important to the league in one way or another.

David Stern
The entire league wore a black stripe in memory of David Stern, who was the NBA Commissioner from 1984-2004. Stern was integral in helping the league explode with popularity just after the NBA’s “dark period” in the late ‘70s which saw it almost fold due to lack of fans and low virtually no television exposure. Much of what we see in the professional game today is a result of changes made during Stern’s tenure.

Paul Allen
The Portland Trail Blazers wore a black stripe with the initials PGA, and a rose in 2018. It was for their owner and Microsoft co-founder who passed away in October of that year. Allen, who was passionate about sports and loved his Trailblazers, bought the team in 1988 and was always heavily involved with the organization.

Chyna Thomas
Celtics coach Brad Stevens pushed for the league allowing his team a black stripe in 2017 for the passing of Isaiah Thomas’ sister, Chyna. Chyna was lost in a car accident just one day before one of their playoff games. You can see a visibly upset Thomas throughout the game, and it was a classy gesture that Stevens asked for, and the league granted, black stripes to be worn by the team.

Helen DeVos
Orlando Magic owner, Rich DeVos, lost his wife Helen in 2017 and the team wore it to honor her for her charitable contributions and her work with the team to help give back to the community and those in need.

“Hot Rod” Hundley
In 2015, the Utah Jazz wore the stripe in honor of “Hot Rod” Hundley. Hundley played for the Minneapolis and Los Angeles Lakers. He then became one of the great NBA play-by-play announcers. He was the Jazz’s original play-by-play guy, starting with the team in 1974 when they were still located in New Orleans.

Boston Marathon Victims
The Celtics donned the black stripe in memory of the victims of the Boston Marathon bombing in April of 2013. It was a tribute to the people of Boston and all those who suffered on that day.

Wilt Chamberlin
In 2000, the Lakers wore a black stripe to honor the legend, Wilt Chamberlin. Wilt was one of the most iconic figures of his time and widely credited for changing the way the game was played. He played with the Lakers for five seasons before his retirement.

Sheri Berto
Although it may have been used before, this is one of the first times I remember seeing the narrow black strip of material on a player’s shoulder. In the 1991-1992 season, Michael Jordan and the Bulls wore it in honor of Ms. Berto, a long time team employee who passed away. She was so beloved that the team named their new training facility after her.

There are other cases in which this dark but modest symbol has been displayed on player’s jerseys, but the ones above provide some good examples of how it has been used to honor and memorialize people who were important to basketball. Professional sports leagues are like little communities within a city or town and the NBA does a great job treating their community members with honor and respect.

Other types of patches

The black stripe isn’t the only patch that NBA teams have used in remembrance of someone. The Lakers used a black patch with the initials “KB” to honor Kobe Bryant. They also used one with the letters “JB” to honor their long time owner Jerry Buss. The Rockets once used a blue and green striped patch to remember coach Kevin McHale’s daughter, Sasha when she passed away.

Over the years the NBA has found multiple ways to memorialize those who have had a great influence on the game as well as people who are important to the team and community around them. The black stripe on the shoulder of a player’s jersey is not something we look forward to seeing but it is a subtle way for a team or the league to honor those who are important to the game of basketball.

Many people thought it was ironic that the NBA honored former commissioner David Stern by placing a patch on the uniform right by the Nike logo. This is because Stern was always against putting logos other than the NBA’s on the jerseys. What do you think about the NBA using uniforms for advertising revenue? We’d love to hear from you, so please leave your comments.