What is a Brick in Basketball? 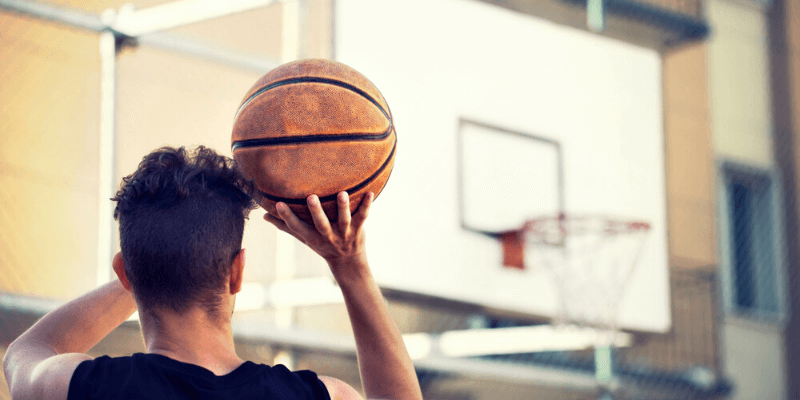 Basketball, when played well, can be a beautiful game. The choreography of the sport coupled with the athleticism and shot-making ability from some of the greatest talent in the world really makes the game a sight to behold on an almost nightly basis. All of the beauty behind the game is why, when it isn’t pretty, fans tend to notice. They will write a player off pretty quickly, especially if they play for their favorite team and are hurting their team’s chances for success.

One of the most egregious ways a player can hurt their team is by shooting the ball so poorly that you actually hurt your team rather than help it anytime you put up a field goal.

Those bad shots can be really bad, and fans of the game (not so) fondly call those shots “bricks”. And if you are a player that shoots lots of bricks, then you are labeled a “bricklayer”. But there is more to a brick than just a bad shot and it is a bit more complicated. And don’t be fooled, even the best shooters can have a night filled with bricks.

Let’s take a closer look at the brick, why it is called that, and some of the NBA’s Hall of Fame bricklayers.

What is a Brick?

A brick isn’t your average missed shot. There is something more that happens to the ball, the rim, and the arena when everyone realizes a big fat brick was just laid during a game. People miss shots all the time in basketball, so what determines the difference between a simple miss and a brick?

When is a Brick a Brick?

As we said, a brick is different than a regular miss, but how? One way is that the shot misses so badly that it hits the rim louder than normal and makes a “clank” noise. Another clear cut sign of a brick is a shot that misses the rim completely and clanks off the backboard.

Sometimes bricks aren’t bricks just because of the severity of one miss, but the frequency at which one player continuously misses as we saw in the video of Steph Curry earlier. Curry is arguably the best three-point shooter in the history of the sport but he is still human and when he goes 1-11 in a game, he has entered bricklayer territory.

Another interesting thing about this trend is that some players can lay bricks at the foul line or three-point line but have a great overall field goal percentage. Shaquille O’Neal is a great example of this anomaly. Shaq’s career foul shot percentage is 52.7%, which puts him close to the top of the list of worst foul shooters ever, however, his overall field goal percentage is almost 59%, which is great for someone who averaged 16 shots per game over his career.

As for the origin of the term brick, there isn’t much information on where exactly it came from, but anyone who has played basketball long enough knows exactly what someone means when they describe a shot as a brick.

While anyone is susceptible to shooting bricks, there are some in the history of the league that outshines the rest. Here is a look at some of the worst (or is it best?) bricklayers ever. Enjoy!

Dudley is an old-school ‘80s and ‘90s NBA player who got by due to his size, toughness, and hustle. And that was about it. He is the name that gets thrown around in friend circles when people ask who the worst shooter was in NBA history, and for good reason.

His career free throw percentage was a disastrous 46%. After watching this clip of his shooting form, you probably wonder why his percentage wasn’t worse. There were years in the league when his free throw shooting hovered around 35% with his worst shooting year ever clocked in at a lowly 30% from the charity stripe. The lack of productivity at the line shows you why he never won any individual awards.

For the player who holds the title as the worst statistical free throw shooter in NBA history, Wallace brought bricklaying to new levels. The interesting thing about Wallace is that the rest of his game was highly productive. He won Defensive Player of the Year four times, made five All-NBA teams, and won two rebounding titles on his way to becoming an NBA champion in 2004.

Now to the ugly. His 41.4% from the free-throw line earns him the “worst ever” title. When you think about the act of shooting a 15-footer in a controlled setting with no one guarding you, most professional basketball players would be licking their chops to get a shot that easy. Not Wallace, as you can see here in one of the not-so finer moments in his career.

Shaq Diesel was one of the most dominant players in NBA history and it shows with his resume of fourteen All-NBA teams, fifteen All-Stars, four NBA titles, and an NBA MVP award. After going down the rabbit hole of Shaq’s statistics, it makes me wonder what type of numbers he would have ended up with had he not shot a rough 52% from the foul line for his career.

O’Neal averaged nearly ten free throws per game for his entire career, making just above half of them. Had he even bumped his percentage to where he was making one more free throw per game over his career, that would have been over 1200 more points to add to his already staggering totals.

Westbrook is a force on the basketball court. His speed and physicality during games make him very hard to guard and when you see him in person, it is hard to imagine any guard in the league who can stop him from getting by them for an easy bucket. This is why it is so perplexing that he would continue to take three-point shots with how miserable he is behind the arc.

I hope you enjoyed our explanation of the brick and the trip down memory lane of some of the worst bricklayers in recent NBA history. Shooting bricks is never something that you want to be remembered by, especially someone like Chris Dudley, who is exclusively known in NBA circles as the poster boy for laying bricks.

The other players on the list have some cache in the league and have succeeded in many other facets of the game, but shooting bricks is something that every basketball player has to deal with from time to time. The game of basketball is hard, and bricks come with the territory. Now get out there and start practicing your shot!

Which bricklayer do you remember most from your favorite team? Let us know in the comments!