Brothers In The NBA 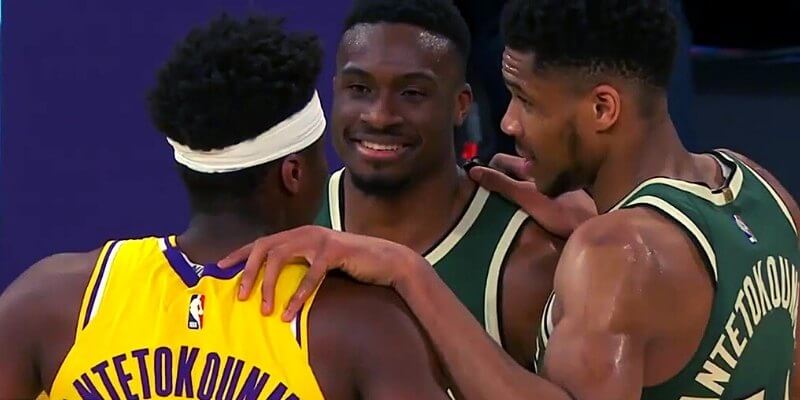 According to the numbers, the odds of someone making it to the NBA are low. Like, really low. In fact, you have about a 0.03% – or 1 in 3,333 – chance of making it to the league. Let’s go a step further: of the nearly 16,000 college basketball players in the United States only about 100 of them will play in the NBA.

Now think of that statistic and add your sibling(s) into the equation! The numbers skyrocket from there!

Obviously, professional basketball players are built a specific way, so it makes sense their siblings, who come from the same gene pool, will possess those same physical gifts. But basketball is about more than just how tall and strong you are.

Let’s take a look at those brother sets who combined their physical gifts, an NBA player skillset, and defied the odds on their way to the NBA.

Current Brothers In The NBA

As of January of 2021, there were nine sets of brothers playing in the NBA:

Let’s take a deeper dive into some of these brothers and track the journey they took together.

The Currys are a special name to the game as their father, Dell enjoyed a 15-year career. The Curry boys grew up around the league, shooting around during their father’s games in the Charlotte Hornets and Toronto Raptors practice gyms.

Stephen Curry has been on the basketball map since his 2008 Cinderella NCAA Tournament run. Steph wasn’t recruited very heavily and ended up at Davidson. The Wildcats made waves in 2008 making it all the way to the Elite Eight behind Curry’s heroics. He was drafted seventh by the Golden State Warriors and the rest is history. He is now known as one of the greatest shooters ever and has won 3 titles for Golden State.

Seth Curry started his college career at Liberty before transferring to Duke after a great freshman season. Seth went undrafted after his senior season but worked his way into the league. He has played for the Grizzlies, Cavaliers, Suns, Kings, Mavericks, Blazers, and 76ers since 2014. He is having his best year ever, with career highs in minutes (33 per game), points (15 per game), and rebounds (3 per game).

March 31, 2021, marked only the second time in NBA history that a brother trio played in the same game together. The Antetokounmpo brothers made it happen when the Milwaukee Bucks faced off against the Los Angeles Lakers. The brothers shared a hug and Giannis remarked that it was the best moment of his career. But how did we get here?

Giannis was a relative mystery when he came into the league. The only footage of him was from Greece and showed him dominating players that seemed half his size. He proved everyone wrong once he entered the league. It only took three years for him to be an All-Star and only five seasons for him to be named MVP. He took the MVP home the following year as well.

Giannis’ brothers are a different story. The youngest brother, Kostas, entered the league in 2018 but only played 2 games that season and 5 games the next. This year, Kostas has been on the Laker roster from the beginning and is only averaging around 4 minutes per game.

The eldest brother, Thanasis, entered the league in 2016. After three seasons overseas, Thanasis was signed by the Bucks and has been playing alongside Giannis since 2019. His contribution isn’t large – this year he is averaging around 4 points in 15 MPG – but he raised the NBA title with his brother just last season. In fact, all three brothers have already won an NBA title in their careers!

The Ball brothers gained a reputation when Lonzo chose to enter the NBA Draft in 2017. While most of the press was generated by their controversial father, Lavar, the Ball brothers did raise eyebrows with their play on the court.

Lonzo signed with UCLA as a five-star recruit before leaving after his freshman year for the league. In just his fifth season, Lonzo has already played for three teams. He was on the wrong side of the LeBron James project with the Lakers. In the attempt to create a championship team, the Lakers dealt away a lot of their young talent and Lonzo ended up in New Orleans.

The Pelicans were a bit of a mess, but Lonzo showed promise. He now plays for the Bulls and the team’s chemistry is great in large part because of Lonzo’s role on the team.

LaMelo Ball’s basketball career started off rocky. After a spat with his high school coach, LaMelo left high school to play overseas in Australia. After foregoing his college eligibility, LaMelo entered the NBA Draft. He was selected third overall making history as the first-ever brothers to both be selected in the top three of the Draft.

LaMelo’s career has shown promise. He took home Rookie of the Year honors in 2020 and is avoiding a sophomore slump so far, averaging 15 points and 6 assists for the dangerous Charlotte Hornets team.

The NBA is a pretty tight circle, and that can lead to two NBA names becoming one big happy family. There are two fairly high-profile examples in the league right now.

Yep, that’s right. Steph Curry is teammates with Lee who married Steph’s sister back in July of 2018. Three months later, the Warriors signed Lee to a contract to suit up with Steph. While Lee is steadfast in his desire to be his own man on the court, it is hard to separate him from one of the league’s greatest players in history.

Lee, however, is balling out right now, averaging 10 points and shooting almost 40% from three to start the 2021-22 season. Becoming the brother of two of the league’s best shooters may have rubbed off on Lee.

Seth Curry shows up in this article three times!

He married Callie Rivers, daughter of NBA Hall of Famer and current NBA coach Doc Rivers, and sister to current NBA hooper Austin Rivers. The combination of two heralded families – the Rivers and the Currys – is rare. Seth actually plays for Doc in Philly currently.

Becoming a brother duo, or trio in some cases is so rare. These nine cases currently in the NBA are proof, however, that greatness can run in the family.

Having a brother that does the same job as you can be very unique. If that job is a professional basketball player – with the crazy schedule, the money, the publicity, the physical and mental toll – then you will speak a language very few ever have.

I am sure the competitive nature of these brothers have never bled into family dinners either, right??

Do you have a favorite brother combo (or trio) in the league? Let us know your thoughts in the comments below!