How Many Calories do You Burn Playing Basketball? 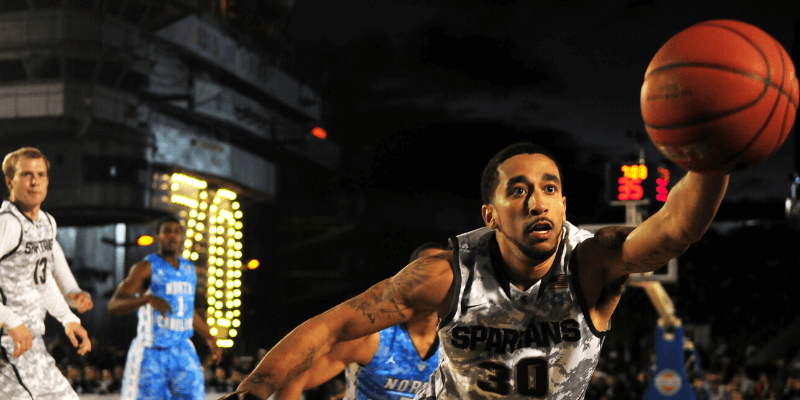 Do you know that a person weighing 155-lb can burn 298 calories in just 30 minutes of playing basketball?

Oh yes! It was the Harvard Health Publications that made this remarkable discovery. They also revealed that a person with a larger bodyweight would burn 355 calories in minutes.

How does this work?

A person with a higher body weight usually expends more energy than someone with a smaller body weight. Thus, there is a correlation between calorie expenditure and body weight.

Basketball may not be the most efficient tool to lose some pounds. But, it can be one of the most EFFECTIVE weight loss tools. With a regular play on the court, for at least twice a week, you can shed some unnecessary fat and maintain your physique.

But, it doesn’t end there. You need to discipline yourself to eat right and watch the quantity you consume. Or else, playing basketball and a wrong diet will be like fetching water with a basket. Here’s why.

The main aim of any exercise is to burn more calories in your body than you ingest. That’s what the calorie deficit is about. The kind of diet you consume has a lot to do with how much weight you can lose. Of course, you can’t achieve much if you consume too many calories daily.

So, it’s important always to check the quality of the calories you consume. You should only consume a healthy diet that contains enough fiber and whole foods—which are easy to digest and suppress hunger.

There are a ton of factors; such as age, genetics, the intensity of workout, and gender, that greatly influence your calorie expenditure. But, you can measure your total calorie expenditure with a formula and get a reasonably accurate result.

It’s simple: multiply the weight of your body (pounds) by 3.6.

The above calculation will paint a clear picture of how many calories you can burn when you play basketball for an hour. If you play more or less than an hour, you can either increase or reduce the number respectively.

Comparing Basketball to Other Sports

A lot of sporting activities are generally “start and stop” in nature, including basketball. Thus, they may require substantial effort to play. But, they don’t burn as many calories as sports that involve continuous exercises like running.

For example, a runner weighing 155-lb can burn 465 calories in 30 minutes as against someone that engages in basketball—which is “start and stop” in nature.

Thus, a small forward or power guard that runs more often on the court will burn more calories than other players.

The American Council on Exercise classifies the calorie-burning calculations into six classes.

In descending order of intensity, we will be listing six types of calorie burning for a male basketball player who weighs 170 lb.

Let’s face it. Not even the greatest NBA players can play on a full 48 minutes of court time, without going for a time out.

But, you can burn a whopping 677 calories if you play full-court basketball at the local YMCA with no time outs or substitutions.

2. Running in the court: Player loses 171 calories per game

Stats from Basketball-refrence.com showed that Quincy Pondexter ran an average of 1.3 miles per game at a speed of 4.2 miles per hour in 2014. In essence, given the height of Pondexter, he ran a total of 18.6 minutes.

That supports the myth that basketball players can run an average of five miles every game. Also, the average NBA player can lose about 200 calories from running around the court alone.

If you shoot baskets and retrieve balls casually for 21.9 minutes at the park, you would be burning one-fifth of your daily calorie target.

Interestingly, you can increase the number of calories you lose to over half your target. It’s simple. Spend a sunny Saturday or Sunday afternoon shooting at your backyard for 45 minutes.

Every time a player gets the ball, to dribble, he spends at least 90 seconds in the game. On average, such player will burn about 15 calories for every 90 seconds he spends dribbling.

Thus, if the player gained possession of the ball for about 5 minutes in the game, he will burn 75 calories. Take away bench time from the equation and calculate the amount of time you spend dribbling at the park.

You will have to spend an average of 12.4 minutes dribbling in the court, to lose about 124 calories.

You’d need to make at least 19.7 passes in a game to effectively burn about three calories. Even though it’s not as effective as other activities that burn hundreds of calories in a game, it’s still part of the game.

To get the most from this activity, find a partner that will join you in a passing drill for at least fifteen minutes.

Taking jump shots are the least percentage of a basketball player’s time on the court for every game. Making jump movements don’t do a lot when it comes to losing calories in the court.

In summary, a basketball player can burn a ton of calories in a game, but it largely depends on four things;

The calories you burn in a match is dependent on the number of movements you make in the court. Not the time you spend sitting on the bench. You’ll not burn calories; instead, you’ll burn out.

Have you ever taken a conscious note of how much calories you lose after each game? Are there other ways to burn calories you think we didn’t mention? We’d love to hear from you; feel free to share your comments and suggestions.