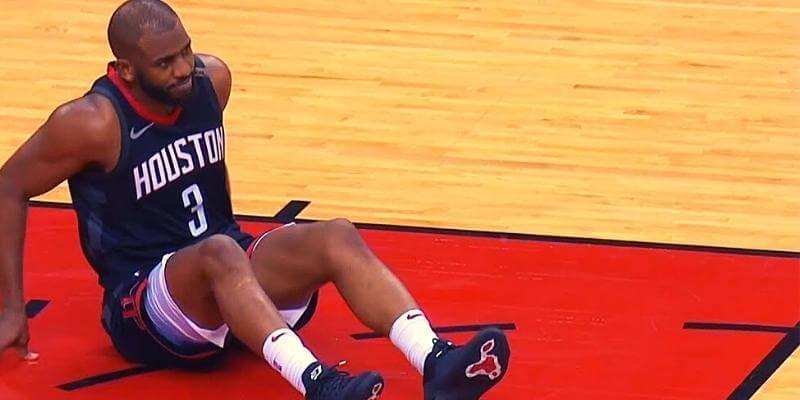 No athlete wants to deal with injuries, but they’re a part of every sport. Not only that, but the more intense the games and the higher the competition, the more they occur. That’s why so many pro players suffer a range of issues throughout their career.

Many NBA athletes get hurt throughout each season. While they try to mitigate such issues, that’s not always possible. One such player is Chris Paul. This guide analyzes his injury history and covers the various ailments that have plagued his storied career.

There’s no doubt that Paul is one of the greatest point guards to ever step on an NBA court. However, he’s much more injury prone than other all-timers. He’s fought through a myriad of different issues, some of which have directly impacted his legacy.

While it’s not fair, as injuries never happen by choice, not getting injured in big moments can separate a great player from a good one.

Paul is a very good player, but he never quite reaches that next level. A big part of that is how his body failed him at key times.

As mentioned, Paul has dealt with plenty of issues throughout his more than fifteen year long career. He’s had some bigger injuries that have kept him out for long stretches, but he’s pushed through a small number of small ones too. Those can be just as frustrating.

Paul is injury prone, meaning that he misses at least a few games each year due to one problem or another. Such issues have only gotten worse with time. Where he would be out one or two games, he’s not missing much longer stretches for rather small problems.

Over the past five years, Paul missed a lot of time.

Though a lot of those injuries stayed minor, and only kept Paul out here and there, the bigger issue is that they occurred all over his body. Some players have one problematic spot. For Paul, it’s as if no part of him can stay adequately healthy.

During that time frame, he suffered injuries to his thumb, shoulder, hamstring, ankle, hand, back, hip, and knee. That wide range reflects just how much the point guard struggles with his health.

Going past the small stuff, Paul has had a good number of bigger problems in his career. Not only that, but many of them have occurred during or before some of the most intense playoff runs of his career. In fact, it’s likely the reason he doesn’t have a ring.

His first big injury occurred way back in 2006, when he missed a month due to a sprained ankle.

He next got hurt in 2010, missing thirty straight games as the result of a deep knee bruise.

Another knee issue kept him out of 9 games in 2013, while a separated shoulder put him out for 18 the following year. Those were bad, but the real issues hadn’t happened yet.

You could argue that no NBA star has been as unlucky with injuries as Chris Paul. It’s one thing to miss some time with an issue, it’s another to miss a critical playoff series. However, that’s exactly what happened to Paul starting in the 2015 season.

After an extremely successful run with the Clippers, and staring down a trip to the Western Conference Finals, Paul suffered a hamstring injury during the Semifinals in 2015. He did return during the series, but it wasn’t enough. L.A. lost in seven.

The next year, Paul broke his hand in the first round of the playoffs, which quickly led to an early exit. His biggest injury then came during the 2018 Conference Finals. With the Rockets in control of the series, Paul missed the last two games with a hamstring injury.

Houston lost both games and gave the Warriors an opening to cement their dynasty.  Though everyone remembers Curry and Durant getting another ring that season, few remember that it was Paul’s health that helped them more than anything else.

Chris Paul, for all of his skill and basketball intelligence, is not good at staying healthy. That’s no fault of his own, but it’s a big reason why he hasn’t had the same success as other guards. Even so, if he can stay healthy for his most recent run, he might be able to bring a ring to Phoenix.