What Shoes Does Chris Paul Wear? 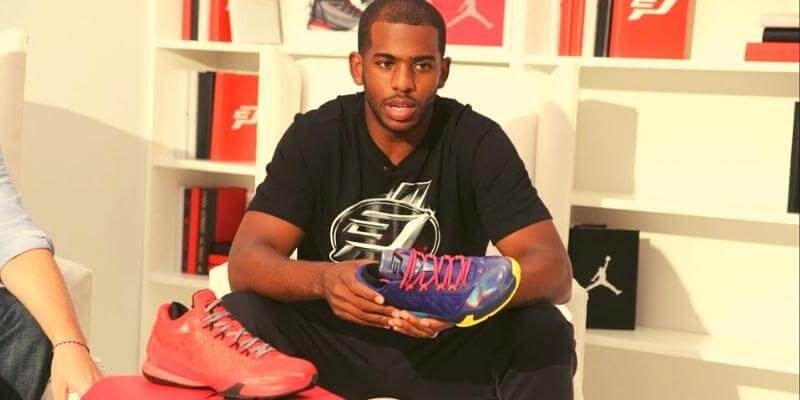 There are several ways NBA players express themselves on the court and in the media, but shoes are one of the biggest. Footwear says a lot about a player, and gives direct insight into both their own personal style as well as how they play.

In this article, I will take a look at the shoes Chris Paul wears in order to shed light on the guard’s personal preferences, and the way he plays the game. It might give you some ideas for your own personal kicks as well.

One Night, One Shoe

Unlike other players who are known for wearing a specific sneaker or certain shoe while they play, Paul wears a smattering of different options. In fact, he’s been seen wearing everything from custom FAMU sneakers to more traditional Nike’s or his own line.

The guard tends to rock shoes from both Nike and Jordan, since he has a close personal connection with each company. What he wears within those lines greatly depends on the time of the year, his mood, as well as the night.

Often, Paul likes to wear bright or flashy colors. Not only that, but tracking down his exact shoe preference is a bit tricky. Like Jordan, he never puts on the same sneaker twice. He believes shoes should only be worn for each specific game, then he switches them up.

As mentioned, Paul favors both Nike and Jordan sneakers. That’s because he’s a Jordan ambassador, and has been ever since he first signed a deal with the popular Nike affiliate all the way back in 2006.

He’s been with Jordan for the past sixteen years, and that shows no signs of stopping. Not only did he get a monetary agreement upon signing ($2.4 million), but he also has a shoe line. The Suns point guard has had 12 signature shoes, and more may be on the way.

In fact, Paul is known for his extremely large and expansive collection of Jordan sneakers. He loves just about everything from the brand, both for their traits as well as what they’ve done for him. However, he especially loves the 1s, 4s, and 7s.

All NBA athletes prefer something different with their footwear. Some like sturdier shoes, some want ones that breathe, while some players need something with extra spring. Paul, being a quick point guard, prefers shoes that are lighter and easy to maneuver in.

When the guard goes out onto the court he needs to be able to move, especially now that he’s in the later stages of his career. Going with shoes that have a slimmer profile allows him to run without being slowed down or held back.

In addition, he vastly prefers shoes with a good amount of grip. While all players value good soles, they’re especially useful for Paul because he needs to stop so quickly during drives or dribble moves. Taking all of that into account, it’s clear why he picks the sneakers he does.

Most fans won’t notice an NBA player’s shoes, especially on a night-to-night basis. However, for the player, they matter a lot. Chris Paul may not be known for his extravagant style, but his sleek footwear is both colorful and made especially for the way he plays the game.

There’s no one formula for why a player chooses their shoes, and there’s no way to tell why Paul wears what he does. Even so, the above sections give a good estimation and show that, for any NBA player, the game starts on their feet.