What is “Clutch Shooting” in Basketball? 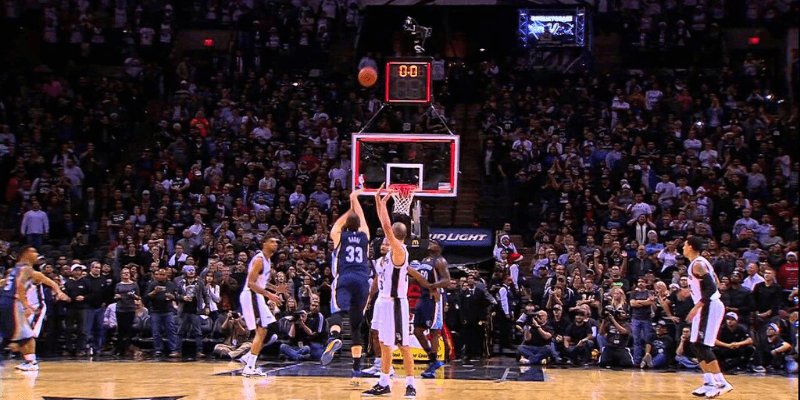 Basketball is full of phrases that are unique and specific to the game. If you’re familiar with these terms they are easy to understand, but if you’re new to the sport or a casual fan you might have no idea what some things mean.

A “slam dunk” or a “crossover” is a common basketball term that most people know even if they are not too familiar with basketball. Over the years, there have been many more terms developed to describe the game.

One of these terms that comes up often and is not always that well known is “clutch shooting.” If you don’t know what this means, you might think it has something to do with your car or is maybe a hunting term.

In reality, it is a term specific to basketball that you often hear from announcers or broadcasters to describe important games and situations.

What is “Clutch Shooting?”

Clutch shooting is basically when a player or team hits a shot at an important time of the game.

Let’s say that your favorite team is down a few points with only 2 minutes left to go. Your star player nails a jumper to get the team within 1 point. Your team makes a defensive stop and then your favorite player gets fouled on a layup attempt to get to the free throw line. He nails both free throws and wins the game. This solid shooting display when it counts is known as clutch shooting.

The ability to make shots when the pressure is high and the game is on the line is of utmost importance in the game of basketball. Some players seem to crumble under pressure and others seem to love it.

If you’re a coach or a fan of the game, you are going to want these “clutch” players on your team. You can rely on them to make good decisions and good shots when the going gets tough.

Sometimes if a team is down a lot near the end of a game, they will start to foul the other team. This stops the clock but also sets up the chance for them to miss free throws. If the team being fouled drains their free throws, it’s a display of clutch shooting that secures the win and displays how important good shooting at the end of a game can be.

If a team has a player that is known for being clutch, they will often go to this person towards the end of games to get the best chance of a win or a big shot. Clutch shooting is a very important part of the game as it can often mean the difference between a win and loss.

Who are the Best Clutch Shooters?

Some of the best clutch shooters in the history of basketball are also some of the best to ever play the game. Clutch shooting is such an important skill to have that it has defined some of the all-time greats. When a game is on the line, you want to rely on your clutch shooters to either hit a game-winning shot or drain one that puts the game out of reach and sucks the life out of the opponent.

Michael Jordan was a legendary clutch shooter and player. He hit so many memorable and important shots that won games and championships for the Bulls. If the game was on the line, you wanted Jordan to have the ball in his hands.

Kobe Bryant is another clutch shooter that always seemed to live for those important moments to seal the game or give the Lakers a victory. The Black Mamba lived for crunch time and had ice in his veins when it was time to take an important shot. I remember him beating my favorite team all of the time with displays of clutch shooting.

Lebron James is another amazing clutch shooter. He has so many iconic game-winning shots and is one of the best to ever do it come crunch time. James is one of those players who is clutch in more ways than just shooting. He has many defensive plays and passes that have helped his teams win over the years.

Clutch shooting is an extremely important aspect of team basketball and can influence whether a team wins or loses. The best clutch shooters are typically some of the best players on the court and their ability and desire to win sets them apart from the competition.

Now that you know what clutch shooting is, keep an eye out for a display of it the next time you watch a basketball game.