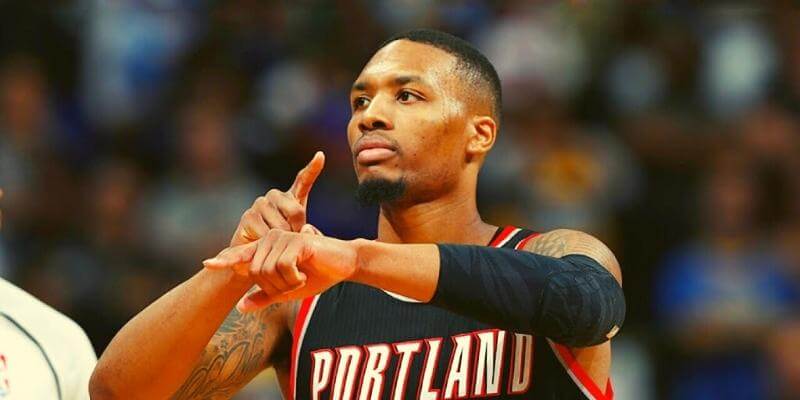 In the NBA, dimensions matter. While talent goes far beyond look or athleticism, there’s no doubt that height and wingspan both play key roles in how well someone performs on the court. Even shorter players need to have a unique edge that other players lack.

This guide looks at Damian Lillard by studying his play style, his measurements, and breaking down the way he managed to rise to the top of the league. That reveals how, despite his short height, he’s become one of the best players in the NBA.

There are three main dimensions that matter in modern basketball: weight, wingspan, and height. Beyond skill, those three measurements are how teams break down and analyze talent. The bigger and quicker a player is, the more valuable they tend to be.

Over the past few years, the NBA has gotten taller and bigger while still getting leaner, quicker, and faster. Where there used to be clear lines between big men and guards, many larger players are able to shoot, and guards have much more heft.

However, Lillard doesn’t fall into either category. He’s a more classic point guard with a small frame and quick shot. His athleticism allows for that to happen.

Lillard has always been a bit undersized for an NBA point guard. He’s not as short as the likes of Chris Paul, but he certainly doesn’t have the power of Luka Doncic or LaMelo Ball either. He’s a shifty guard who gets most of his starpower from his unmatched ability to score.

Lillard stands at 6’2. That puts him one inch below average NBA point guard average and, combined with his 194 pound frame, doesn’t make him especially strong or powerful. As such, in order to make it in the league he needed to rely on his other abilities.

Lilliard is a great three shooter. He’s a constant outside threat who knows how and when to put the ball up at the right time. On top of that, he’s incredibly quick in a way that enables him to drive into the lane. He knows how to finish and has a knack for finding the open man.

All of those traits make him an excellent point. He’s not afraid to take over a game, but he also does a good job of making his teammates better too. Being able to pass well and shoot at a high rate more than make up for his lack of height.

The other aspect that enables Lillard to punch above his weight is his incredible wingspan. In general, NBA players have a reach that extends out two or three inches past their body length. Those with exceptionally long arms have wingspans that go four or five.

Taking such measurements into account, Lillard is a completely different league. His 6’8 wingspan is an incredible six inches longer than his height. That’s not just impressive, that puts him in the top one percent of all players across the NBA.

His arms are extremely long, and they are a big reason for his success. That’s because, the shorter a player is, the bigger their wingspan-to-height discrepancy matters.

Centers and power forwards all have long arms. Even if a player has a longer reach than their opponents, it rarely matters down low where everyone is around their height. It’s on the wing, and especially at the point where that reach advantage becomes much more obvious.

Lillards long arms help him on both sides of the ball. His quick release perfectly complements his extended reach in allowing him to get shots up over taller opponents, while his length gives him the ability to contest shots or stop drives against smaller players.

He can play bigger on offense when he needs to make a tough pass or quick dribble, but also has the ability to d-up taller players when fighting through a screen or going on a switch.

Damian Lillard is not who people think about when they think of an athletic powerhouse. However, he’s incredibly genetically gifted. He’s incredibly quick, has a strong vertical, and, for his height, has one of the most impressive wingspans in the NBA.

He’s not a tall player, especially for modern point guard standards. Even so, his arms more than make up for any lost length. They don’t just show why Lillard’s so special, they reveal why teams have put such a large focus on wingspan over the past few years.