How Many Rings Does Danny Green Have 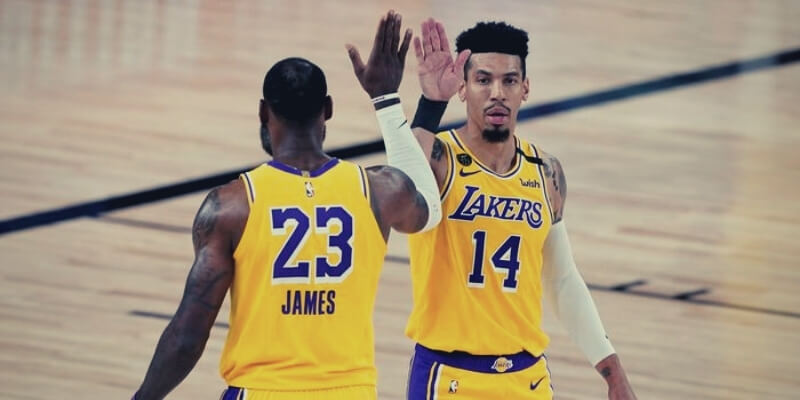 Danny Green, the sharpshooting defensive-minded veteran, has won three NBA titles over his 11-year career. While Green has never been the star of an NBA title team, he does all the right things on the court to help his team be successful. His stat line never jumped off the page—with modest career averages of 9 points, 3.5 rebounds, and 1.6 assists—but he has always played like a winner.

I will take a deeper look at the three years in which Danny Green won a ring, paint you a picture of the league at that time, and explain how Green helped his teams win titles. Let’s go!

Danny Green has always played the part of a role player, even as a high school prospect. During his senior year, Green averaged 20 points, 10 rebounds, 4 assists, and 4 blocks. Those are good numbers, but nothing like the conflated scoring averages—often in the 30+ point range —you see from most 4-star recruits.

Green played all four years at the University of North Carolina in Chapel Hill, improving his averages every year. Again, his stats never jumped off the page—13 PPG, 4.7 RPG, 2.7 APG— but he was a solid defender who shined for the Tarheels in the 2009 NCAA Tournament.

He was selected 46th overall in the 2009 NBA Draft by the Cleveland Cavaliers. After only 20 games, the Cavs waived Green, beginning a three-year journey that saw him play for several teams across the professional basketball landscape. After short stints in the NBA, the D-League, the NBA again, and the Slovenian basketball league, Green found a home in San Antonio.

Green immediately made an impact there, being thrust into big game spots as the Spurs were always in contention for the title. Green stayed in San Antonio from 2012 until 2018 when he was a part of the Kawhi Leonard trade to the Toronto Raptors. After a very successful season in Toronto (more on that later), Green was shipped to Los Angeles for 2019-2020 (more on THAT later, too!).

This year, Danny Green is playing about 30-minutes a game for the Philadelphia 76ers and averaging almost 9 PPG on 40% shooting from three-point range.

One such stat—one that might surprise NBA fans—is that Danny Green sits fourth on the all-time list for career three-point percentage in the NBA Finals at 42%! While he will never win a Finals MVP award or be the best player on a Finals team, Green’s Finals career is nothing to scoff at.

The 2013 NBA Finals will go down as one of the best in NBA history. Danny Green was big for the Spurs, hitting twenty-seven three-pointers and setting the record for most threes in the Finals until Steph Curry broke it in 2016. While the 2013 outcome was heartbreaking, it was also encouraging for both Green and the Spurs. They blew through the 2013-14 regular season with the best record in basketball entering the playoffs.

After taking care of the Western Conference, they faced the Miami Heat for the second straight year—but this time, the Spurs were prepared. They won Game 1 by fifteen, lost Game 2 by two, and then never looked back. The average margin of victory for the Spurs during the series was 18 points. Most games were over by the start of the 4th quarter.

Danny Green played well over the series, averaging 9 PPG, with stellar defense against Dwyane Wade, LeBron James, and the rest of the Heat wing players.

Danny Green’s time in Toronto was short-lived but very fruitful for him and the Raptors organization. When Kawhi Leonard was dealt to Toronto from San Antonio for Demar DeRozan, Danny Green was a piece of the deal. The Raptors tried to hit a home run with the Leonard trade—and, boy, did they ever.

Alongside stars like Marc Gasol, Kyle Lowery, and Kawhi Leonard, Danny Green fit into the team with his “whatever it takes” mentality. In Games 1 and 2, Green played the part of defender and shot-maker well. Game 3 was partly “the Danny Green game” of the series when he hit 6 threes on his way to 18 points—and a 14-point Raptors win.

The Warriors ran into some bad luck during the series, with injuries to both Klay Thompson and Kevin Durant, but the Raptors still played phenomenally. Danny Green’s series averages were on par with his career numbers. The Raptors leaned on him defensively throughout the series.

The 2019-20 NBA season, along with everything else that occurred around the globe in 2020, will go down in history as one of the weirdest, most challenging NBA years ever. The season began as usual, and the LeBron-led Lakers had a great start out of the gate. Then, in early March, the season postponed—and everyone was left to wonder if it was worth restarting.

Lucky for hoops fans, they did—in a carefully designed bubble in Florida. The Lakers became early favorites for the title. Danny Green saw his minutes (and three-point shooting numbers) dip slightly as his role on this Lakers team differed from those of his past seasons. This didn’t stop the Lakers from making the 2020 NBA Finals against the scrappy but ultimately overmatched Miami Heat.

The Heat won Game 3, then squeaked by in Game 5 to make the series competitive. Green actually missed a wide-open three-pointer, a shot that is usually automatic for him, to win the game. He was criticized after the game but bounced back for the clinching Game 6, scoring 11 points, 3 of 7 shooting from behind the arc.

Green is currently averaging 28 minutes per game on the Philadelphia 76ers, who are atop the Eastern Conference and hold the third-best record in the league. They have size and star-power, with current MVP favorite Joel Embiid and do-it-all (ok, maybe not everything but close) athlete Ben Simmons. They have shooters in Green and Seth Curry, and they are a good defensive team.

All this to say that Danny Green may not be done winning rings yet. If Philly plays their best basketball of the season during the playoffs, they could represent the Eastern Conference in the NBA Finals. It isn’t far-fetched to say the Sixers could possess the two best players on the court come playoff time; there’s potential for them to gain the franchise’s first ring in almost forty years.

Danny Green has been very fortunate to have played on so many successful teams. Shooting—particularly from three-point range—and defense are crucial aspects of the game today, and Danny Green is a career 42% shooter in the Finals. That, along with his All-Defense style of play, has contributed to his success—and why he holds three NBA Title rings for his career.

Has Danny Green ever played for your favorite team? What was your experience rooting for him? Let us know in the comments section below!