How Many Rings Does Dennis Rodman Have 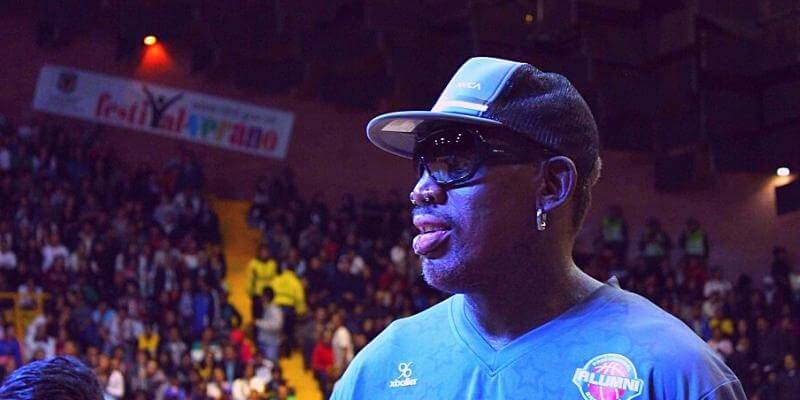 Dennis Rodman’s career is one of the more fascinating careers of any pro athlete in any sport. Even though he has made mistakes, burned bridges, and been a distraction in the locker room, Rodman is one of the most successful players in NBA history.

Not only was he one of the most feared defensive stoppers and the GOAT of rebounding among his peers, but his teams won regularly. Some may be surprised to know that, even with all of the controversy surrounding him, Dennis Rodman won five NBA titles in his career!

Let’s take a look at Rodman’s career from a bird’s eye view and highlight his title years.

Rodman was relatively unknown in 1986. Pro basketball wasn’t even on his radar after high school when he took a job as a janitor in the Dallas-Fort Worth Airport. It wasn’t until he hit an eight-inch growth spurt – going from 5’11” to 6’7” – that he thought about playing again.

Rodman’s college career was as unorthodox as they come. He began at Cooke County College and averaged 17 points and 13 rebounds before flunking out after one semester.

He regrouped after that, enrolling at Southeastern Oklahoma State University, an NAIA school. His stellar performance there – he was three-time All-American and averaged 26 points and 16 rebounds over three seasons – helped him get noticed by pro scouts.

The Detroit Pistons took notice at a pre-Draft camp. They selected Rodman in the second round of the draft. The Pistons were good and Rodman earned playing time his first year behind his hustle. His playing time continued to increase each season and in his third year in the league, Detroit won the NBA title.

Dubbed the “Bad Boys”, the Detroit Pistons repeated in 1989 and 1990. Rodman was a reserve off the bench, but he averaged almost thirty minutes a game each year. He picked up his first All-Star appearance in 1990 and made a name for himself on a national stage during the Pistons’ championship runs.

After the Pistons’ two titles, the team fizzled and left Rodman a bit lost in the league. He played with them until the end of the 1993 season, even averaging back-to-back 18-rebound seasons, before heading to San Antonio. By the time he got to the Spurs, Rodman’s eccentric side began to show.

Although he averaged 17 and 16 rebounds per season respectively, Rodman’s time in San Antonio was marred with issues. His colorful lifestyle didn’t mesh well with the established culture that players like Sean Elliot and David Robinson brought to the Spurs.

Even though he was labeled a distraction, the Spurs played well. They were two wins away from the NBA Finals in 1995 before Rodman saw the writing on the wall.

After San Antonio, Rodman headed to the Chicago Bulls. Rodman averaged at least 14 rebounds in each of those three seasons and was a surprisingly perfect fit for Jordan and company.

The Bulls three-peated from 1996 through 1998 with Rodman acting as their starting power forward. The biggest reason Rodman thrived in Chicago is that MJ and coach Phil Jackson left him alone as long as he took care of business on the court.

Rodman played one more year in Dallas before calling it a career in 1999. His five titles land him tied for number 14 on most titles for a player in NBA history. He is in good company too,  with all-timers like Magic, Kobe, and Tim Duncan joining him with 5 rings.

Let’s take a look at Rodman’s title years a little closer and see why his production helped each team that he won a title with.

The Pistons endured a tough loss the previous two years, getting as close as possible to a title without winning one. In 1987, they lost in seven games to the Boston Celtics in the Eastern Conference Finals. The following year, they lost to the Lakers in the NBA Finals.

Both losses, while brutal, helped them build a winning pedigree. Rodman played well in a supporting role in both series even guarding the Celtics and Lakers best players in Bird and Magic, respectively.

In 1989, the Pistons were a team of destiny. They swept the Celtics before beating a tough young Bulls team in six games. This set them up with another Lakers matchup in the Finals.

There was no drama, however, in this series as the Pistons swept them to capture their first title. Rodman played well even posting a 12 point, 19 rebound performance in Game 3.

In 1989-90, Rodman’s role on the team increased. After the Pistons lost Rick Mahorn, Rodman stepped in as the team’s starting power forward.

Rodman thrived in the role change as he was selected NBA Defensive Player of the Year. While he wasn’t known for his scoring, he was very efficient offensively on his way to leading the league in field goal percentage.

Detroit’s road to the title was a bit harder the second time around. Detroit swept Indiana and beat the Knicks handily in the first two rounds. The Eastern Conference Finals found them up against an even more prepared Bulls team. Jordan was a year older and he and Scottie Pippen gave the Pistons problems before they won in seven games.

They met the Portland Trailblazers in the Finals. Led by Clyde Drexler, Portland was the new kid on the block and wasn’t ready for the grind of the NBA Finals.

Detroit beat them in five games on their way to a repeat title. Rodman hurt his ankle and never excelled in the finals, but the Bad Boy Pistons were too much for Portland anyways.

Six years after his last title with Detroit found Dennis Rodman in a whole different place. Gone was the young talent from Detroit, and in place of him was the “celebrity” with colored hair and a reputation on and off the court.

The late-90s Bulls were built differently than the Pistons of the late-80s. Michael Jordan was the GOAT and nobody really had an argument against him. He was the star, Scottie Pippen was second in command, and everyone else played their roles.

Rodman was no different. Even though he was older now – he turned 35 during the playoffs – Rodman stepped up when the team needed him. He averaged 14 rebounds during the playoffs and even scored in double-figures in a couple of huge games, including the deciding game versus the Knicks.

The Bulls rolled into the Finals and beat the Seattle Supersonics in 6 games. The win was the Bulls fourth title in six years and Rodman’s third overall.

It was another historic season for the Bulls. They were odds on favorites all year to repeat and that is exactly what they did. They swept the Washington Bullets (now the Washington Wizards), and beat both the Hawks and Heat in five games apiece en route to a Finals matchup with the Utah Jazz.

The Jazz were led by MVP Karl Malone (even though everyone now agrees the award should have been given to MJ) but couldn’t keep up with the Bulls. Rodman had an up and down playoffs but contributed on the glass and defensively.

Even though this was Dennis Rodman’s fifth and final title, the 1998 playoffs will always be remembered as Michael Jordan’s farewell tour (even though he surprisingly returned to the league 5 years later).

The Bulls met the Jazz again in the Finals and many wondered if this was the year they were bested. They were older and the wear and tear of three straight seasons of 100+ games had to be taking its toll.

A 37-year old Rodman came up huge in the early rounds, and played over 20 minutes in all 20 playoff games. The Bulls prevailed, Jordan got his last Finals moment, and Dennis Rodman was crowned champion for a fifth and final time.

There are books and documentaries that cover the up-and-down career of Dennis Rodman that I suggest every basketball fan watch. He was part of two of the most influential teams in the last 40 years in the Bad Boy Pistons and the Chicago Bulls’ second dynasty.

He had to be seen to be truly appreciated. He only averaged 7 points for his career, but his defense and rebounding are what made him the winner he is remembered as.

Do you remember watching prime-Dennis Rodman? Let us know your fondest memories in the comments section!