What is Devin Booker’s Net Worth? 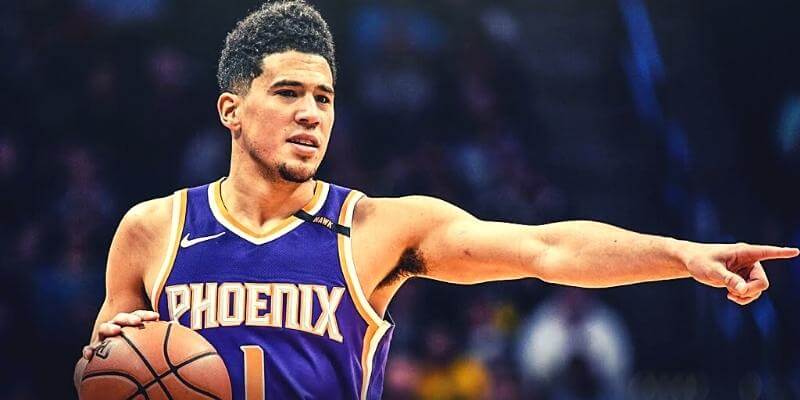 The NBA is an extremely lucrative league. Every athlete on every team gets a good deal, no matter how much they play. Even so, some players earn much, much more than others. The better someone is, the more value they accrue.

In this guide, I will look at Devin Booker’s earnings throughout his career. The Suns superstar is the face of the franchise, and that has allowed him to pull in a lot of money through smart investments, large contracts, and several endorsement deals.

While there’s no specific number out there, Booker’s net worth lies somewhere between $30 and $50 million. That’s a good chunk of change, especially for someone who’s only been in the league for a few years, but it makes sense given how well he’s done in the NBA.

Not only does Booker have a few large contracts with the Suns, but he also garnered a good share of endorsements and made smart investments with his early earnings. It is those moves that have enabled him to smartly (and quickly) grow his wealth.

Though Booker’s done a good job with external deals, as I’ll cover below, most of his net worth stems directly from his contracts. As a first round draft pick, he came in with a solid rookie deal. It gave him millions up front, and was also fully scalable.

The four-year deal had a cap of $10 million, which Booker fully earned during his early years in Phoenix. That figure came from both the hype Booker had when he first entered the league,  and his spot in the draft. The Suns ended up exercising both third and fourth year options.

However, it wasn’t until the guard started thriving in the system that he got his huge contract. After excelling with the Suns and giving the franchise more hope than they’d had in years, the 6’5 shooter signed a whopping five-year $158 million extension.

That contract, which gives him $36 million during the peak year, is easily the largest deal in the history of the franchise. He has more than earned it, and continues to earn it more and more with each passing game.

The guard is currently in the middle of his big years, which have done a great job to increase his wealth. The contract pays through the 2023-2024 season, but it’s likely that he’ll sign an even larger supermax deal once it runs out.

Booker is not known for his endorsements in the same way as larger profile players like Chris Paul or Steph Curry. Even so, he’s penned a few deals with brands and companies outside of basketball, and they’ve all had a large impact on his net worth.

His first ever brand deal occurred with Nike. He signed with the shoe giant upon first entering the league. Though the deal was smaller than what other athletes get, he penned a much bigger muli-year, multi-million dollar contract with them after becoming a sneaker free agent in 2019.

He had several options when going out onto the free market, but decided staying with Nike was the best choice given his relationship with the brand and their monetary offer.

Going into the shoe game is one of the best ways for NBA stars to gain extra cash beyond the court. Booker went beyond that by signing deals with Call of Duty and investing in a luxury watch marketplace known as WatchBox.

Both deals helped grow his investments and have proven quite lucrative. In fact, the Suns star brings in roughly $8 million from various endorsement deals. That’s not a lot compared to what he makes from the Suns, but it’s still a good chunk of change.

Booker also engaged in various charitable efforts. While the moves don’t work to grow his worth, they still affect it in a tangible way. As such, it’s important to mention them in this discussion.

He pledged to split a total of $2.5 million between five different non-profit organizations in the Phoenix area. Not only that, but the star donated a total of $100,000 during the Covid-19 lockdown and continues to work with disenfranchised communities around the Phoenix area.

Devin Booker is a top NBA player, and his net worth perfectly reflects that. The Suns star isn’t just good, he’s brought new life to a franchise that didn’t see success for a long, long time. That, mixed with his skill and personality, has landed him a lot of endorsement deals as well.

Not everyone in the league can match Booker’s worth. While a few superstars have much more money than he does, it’s only a matter of time before he catches up.