What Happened to Devin Booker’s Nose? 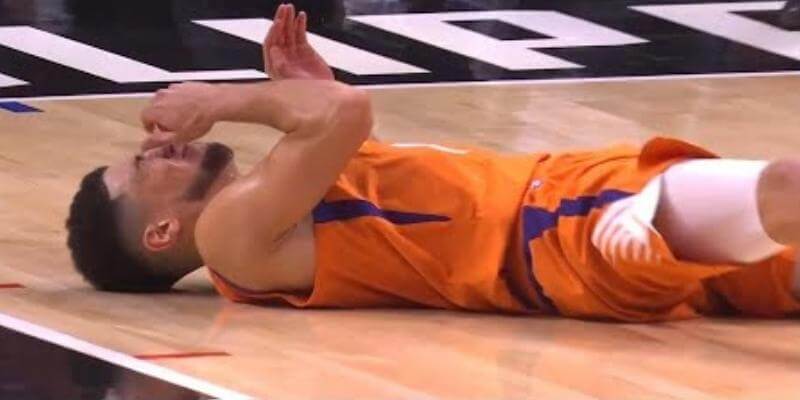 Injuries, while brutal and unforgiving, are an unfortunate part of sports. That’s especially true at higher levels. The tougher the competition gets, the more likely it is for someone to take a hard hit or tough fall. That’s exactly what happened to Devin Booker in the NBA playoffs.

In this article, I will break down how the Suns’ superstar managed to hurt his nose during an intense play by looking at why the injury happened, its lasting effects, and the way it was treated.

Devin Booker is not a player known for missing a lot of time. However, he does have a reputation for being an extremely tough, physical player. He goes hard out on the court, and plays at an intensity that very few people are able to match.

That came to a head in the 2020-2021 season during game 2 of the Western Conference FInals when the Suns faced off against the Los Angeles Clippers. It had been an intense series, with a lot of high-level play from both sides.

With 3:22 left in the third quarter, Booker found himself on the wing guarded by Patrick Beverly. He went for a hard drive, and when he did his face collided with Beverly’s.

That impact, strangely similar to Steve Nash’s injury during the Western Conference semifinals against the Spurs in 2007, sent Booker sprawling to the floor with blood pouring from his nose.

While the referees initially took a deep look at the play to determine if the foul counted as flagrant, they ruled it a common one due to the contact being unintentional.

The game paused after the collision and Booker quickly left the court. Shortly after, doctors ruled the injury a laceration and let the guard come back into the game during the fourth quarter. Pushing through the pain, he helped the Suns secure a key 104-103 victory. However, that wasn’t the whole story.

Despite the initial reports, the injury was much more severe than a simple laceration. Booker broke his nose in three places during the play. Many speculated something similar when the contact occurred, but the Suns didn’t want to release the news during the game.

Not only did he have three fractures, Booker also had to have his nose reset when he sat out at the end of the third quarter. That’s not an easy process, but it was extremely important to Booker’s healing and recovery. It even helped him come back as quickly as he did.

After getting some stitches, numbing shots, and a quick re-break, the sharpshooter managed to play in game three of the series. He wore a mask, reminiscent of Rip Hamilton, and did a decent job. It wasn’t his best performance, however, and the Suns did go on to lose.

Wearing it was still important because without the plastic he could have easily broken his nose again. He removed it after missing a layup in the third quarter, but he remained careful throughout the rest of the series.

Every NBA player gets injured during their career. The goal is to limit the severity and longevity of such injuries. When Booker broke his nose, it could have been a long-lasting issue that kept him out for multiple games. He didn’t even miss an entire quarter.

That shows his resilience and determination as a player. He’s not someone who sits out very often, especially when something big is on the line. There was no way he would have passed up a chance to compete in the Western Conference Finals.