Who Are Devin Booker’s Parents 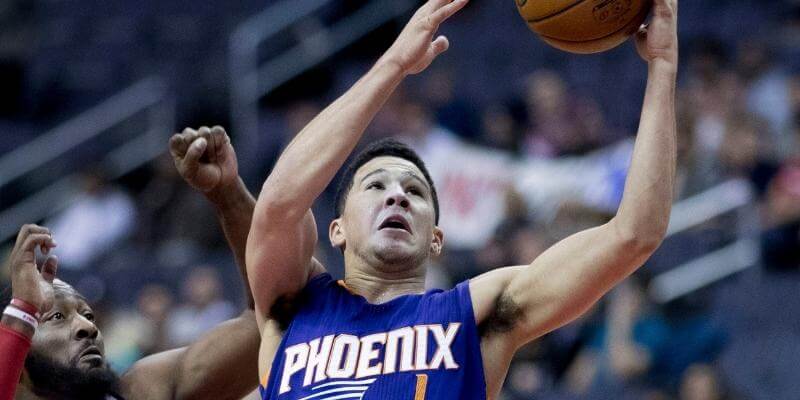 If you watched any Phoenix Suns games from this past year’s NBA Playoffs, the name Devin Booker is probably on your radar. Booker’s name may have already been high on your list of the NBA’s best young talent, but this past year’s playoff run may have cemented it.

Booker is a relatively new face in a league of several superstars, and you may not know much about him or his personal life. His origin story, however, is quite interesting.

Today, we will cover Devin Booker from a young age. We will also reveal the story of his parents, Veronica Gutierrez & Melvin Booker, and how their paths made Devin the person that he is today.

Devin Armani Booker was born and raised in Grand Rapids, MI. He was raised mainly by his mother while his father played professional basketball in Europe. Devin visited his father during summers but didn’t form much of a relationship with him until after Melvin retired from professional ball.

Booker lives in Grand Rapids until his sophomore year in high school when his father convinced him to move to Mississippi to work on his game. At this point, Devin was pretty talented and his father, having a unique eye for talent, was looking to work closely with him. Booker excelled during his high school career, averaging 22, 29, and 31 over his three seasons respectively.

Coming out of high school, Devin Booker was between a 4 and 5-star recruit on every major recruiting board. He chose the University of Kentucky as his college stop, which ended up being brief.

After his freshman season, in which he was named SEC Sixth Man of the Year, he decided to enter the draft. He was one of seven Kentucky players to leave school early and try their hand at the NBA.

Booker was drafted 13th overall in the 2015 NBA Draft. He joined a really bad Suns team but showed individual promise, earning an All-Rookie selection on his way to averaging 14 points per game.

On January 16th, 2016, Booker joined the likes of Kobe Bryant, Tracy McGrady, Kevin Durant, Dwight Howard, and LeBron James as the youngest to score 20+ points more than once.

Booker’s point total improved his first four years in the league and in his fifth season, he made his first All-Star team.

Booker’s Suns teams struggled his first five years in the league, averaging only 24 wins per season and never making the playoffs. While the wins weren’t racking up, Booker did experience some individual success.

On March 24th, 2017, Booker became the youngest player in NBA history to score 70 points in a game. Booker scored 51 of his 70 points in the second half on his way to joining Wilt Chamberlain, David Robinson, Elgin Baylor, David Thompson, and Kobe Bryant in the 70-point club.

This all changed in 2020-21. The team finally found its identity behind Booker, DeAndre Ayton, and future Hall of Famer Chris Paul who joined the team in the offseason. The Suns made it all the way to the NBA Finals before losing in 6 games to the Milwaukee Bucks.

Devin Booker is now a household name in NBA circles, and many want to know more about this young talent who went relatively unnoticed by mainstream media outlets until this past year. This includes his upbringing, especially with a father who had some skills on the court as well.

Devin Booker’s parents met in Grand Rapids, Michigan while Melvin Booker played for the Grand Rapids Hoops from the Continental Basketball Association (CBA). Shortly after meeting, the two gave birth to their only child together, Devin Booker. They were never married.

Booker was looking to continue his basketball career after not being drafted post-college. As a 2nd Team All-American selection and Big Eight Conference Player of the Year, Melvin admitted that not being drafted was very painful.

Melvin eventually ended up in the league, but only played 32 total games over two seasons. He averaged 5 points, 1 rebound, and 2 assists over his short career.

When Devin was a baby, Melvin decided to try his hand out professionally in Europe. He made stops in Italy, Russia, and Turkey before retiring from basketball. After his playing days were over, Melvin moved back to Mississippi to become an assistant coach at his alma mater, Moss Point High School.

Before Melvin came back from Europe, Veronica raised Devin herself in Grand Rapids. Melvin’s busy schedule overseas, along with the time difference between Europe and the US caused a rift between him and his son.

Now that Devin sees how busy a professional basketball schedule can be, he says he understands why his father struggled to keep in touch. To Veronica’s credit, she always fostered a relationship between Devin and his father.

Once Devin joined his father in Mississippi, his game reached a new level. Not only was he maturing and growing into his adult body, but he was working out with his father, who taught him the ins and outs of the game. Devin said the biggest thing his father instilled in him was the importance of a basketball IQ on the court.

His mother often gets lost in his journey as she allowed her son to move from Michigan to Mississippi. But her sacrifice was the ultimate one for her son. She knew how important the game was to Devin.

She also knew how talented Devin’s father, Melvin was on the court. While the two never married, the love and respect each other had for the other taught Devin a valuable life lesson.

Devin Booker is now poised to have a Hall of Fame career if he continues the trajectory he has experienced over his first six years in the league.

After playing in the NBA Finals, Booker joined the Men’s US Olympic Basketball team in Tokyo to capture a gold medal. Most NBA players who have the Olympic basketball experience come back to the league a changed player for the better.

Booker is excited to leverage his experience over the past two years into his seventh season, where the Phoenix Suns are on the shortlist of NBA Title Contenders.

Devin Booker’s relationship with his parents paved the way for his successes both on and off the court. Being raised by a single mother gave him an appreciation for family and a bond with his mom, Veronica, that can’t be broken.

The rekindling of a relationship between him and his father is special. Not only has his father acted as a mentor for him on the court, but the second chance at being Devin’s father after being gone for much of his childhood is the most important gift of all for Melvin.

For Devin Booker, the sky is the limit on the basketball court. He owes that success to both of his parents for different reasons, and he is very aware of his good fortune.

Are you a Devin Booker fan? Let us know when he hopped o your radar below in the comments section!