Is Devin Booker White or Black? 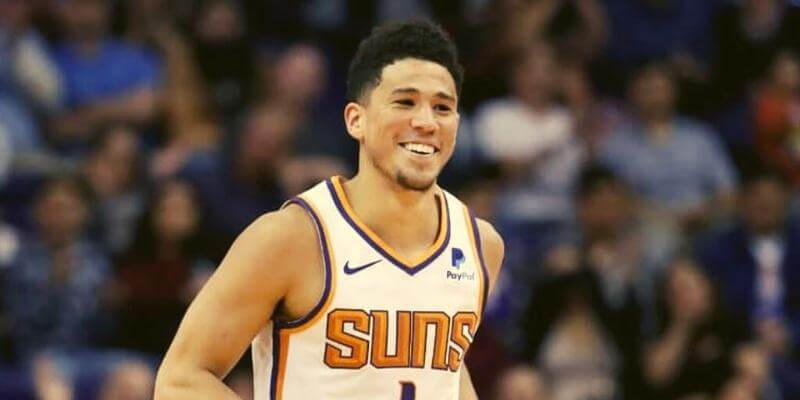 NBA players, as with professionals from any sport, come from a wide range of different cultures or backgrounds. Most are monoracial, but a good chunk are biracial as well. A select few, however, have an even more diverse makeup.

This guide studies Devin Booker’s background by looking into his past, the past of his family, as well as how he grew up. Studying such examples will shed a light on where he comes from and show the genetics of several other high-profile players.

A Mix of Three

Booker is one of the most straight-forward players in the NBA. He’s a pure scorer who acts as a shooting guard no matter who he’s lined up against. His job is to get the ball, drive hard at the hoop, or pull up for the shot. Off the court, he’s a little more convoluted.

While it’s hard to tell at first glance, Booker is a makeup of three different ethnicities. Many people assume he’s half white and half black, but the real answer isn’t so straightforward. He’s a mix of black, Mexican, and Puerto Rican descent.

He gets his black ancestry from his dad, while he gets both Mexican and Puerto Rican from his mom. He didn’t have a huge connection to that side growing up, but it’s now grown into a big part of his identity.

Being three different ethnicities makes Booker a minority in the NBA. While most of the league is black (74.2 percent) or white (16.9 percent), only 2.2 percent is any form of Latino. Booker falls into that category.

When looking at Booker’s ethnicity, it’s important to look at his parents. His dad, Melvin Booker, made a name for himself at the University of Missouri. While he wasn’t good enough to get drafted into the NBA, he did have enough skill to play for the Rockets, Nuggets, and Warriors.

Even so, his professional career was short lived in the states. He only stayed in the league for a year before he went to Europe. There he had much more success, playing in France, Turkey, and Italy.

Despite being across the world, he did spend time with Devin during the summers. That constant connection kept Booker connected to his African-American roots and helped foster a key part of who he is today.

While Booker’s dad is black, his mom ( Veronica Gutierrez) is two types of Latina. She traces her roots back to the border town in Nogales, Mexico. Though Booker didn’t grow up with ties to those Latino roots, he did appreciate his heritage more and more after joining the Suns.

Being so close to the border and with so many Latino fans, he’s given much more thought to his mother’s side of the family as of late. In fact, he’s one of the only two active NBA players with a Mexican heritage across the entire NBA.

His mom’s dad was born in Mexico, while she grew up in Grand Rapids. It was there where she met Booker’s dad. Her mother, on the other hand, is where Booker gets his Puerto Rican descent. That combination is rare, especially when mixed with his father’s heritage.

Very few people know Devin Booker’s ethnicity, and that’s because he comes from a mixed background. However, he’s far from the only player to lead to confusion. There are plenty of high profile players with more nebulous ethnicities.

That includes players like Jason Kidd, Mike Bibby, and Klay Thompson. All three of them are half-black, but many fans assume they’re white at first glance. Even Stephen Curry gets confused for mixed race, despite being fully black.

Such confusion never occurs with monoracial players, but it’s something all biracial (or tri-racial) players deal with at some point. Anyone with an African-American parent and light skin typically goes through that process.

Most NBA players are monoracial, and a good chunk of them are either fully black or fully white. As such, it’s rare for an athlete to have a mix of three different ethnicities. That makes Devin Booker unique, especially because he’s of Mexican descent.

There are very few Latino players in the NBA. While more have gotten all the way into the league as of late, it’s still somewhat of a rarity. That didn’t always matter to the Suns superstar, but it’s not something that connects him to his greater family.