How Tall is Dirk Nowitzki? 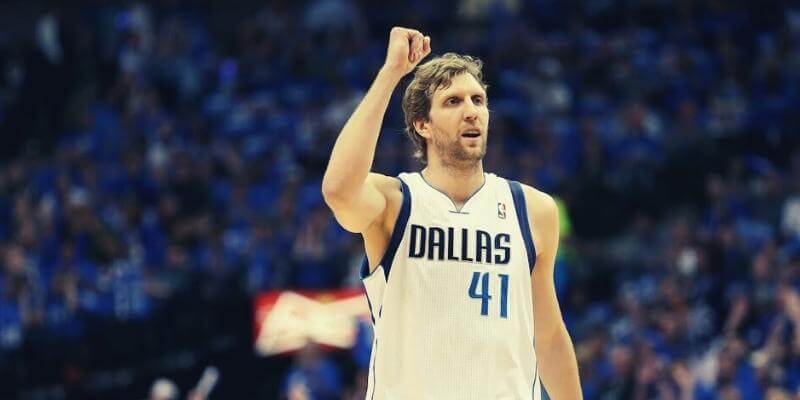 In today’s NBA, big players can do a little bit of everything. However, that’s a recent development. In the past, most big men were pure centers or forwards who had size rather than a deep shot or dribbling skills. That made Dirk Nowitzki a true exception.

The following guide looks at Dirk’s height in detail. Comparing his size to other players in other decades will show, not just the massive shift the NBA has undergone since his prime, but why his skills were so special for a big man to have.

In the early 2010’s, the NBA started to shift towards three pointers. Teams began to stretch the floor, run with smaller offenses, and take more and more deep shots than ever before. That, in turn, led to big men becoming leaner, faster, and much more skilled.

Where athletes like Hakeem and Shaq dominated in the 90’s and 2000’s thanks to their huge size and tough playstyle, today’s most dominant big men have a much more versatile repertoire. Jokic, Giannis, and Embiid can all shoot, dribble, and run the floor.

Big men with a strong shooting ability is common for modern viewers, but it wasn’t always that way. In fact, almost no big men could shoot up until the last ten years. That’s what made Dirk special and why many modern fans now say he was ahead of his time.

Dirk stands an even seven feet tall. That makes him the same height as most centers, and he had the size to back it up. Even so, he wasn’t a pure big man. He deviated from the norm by being a three shooter who could handle the ball and lead an offense.

That versatility turned him into a top ten pick. The forward went to the Bucks at ninth overall before being traded to the Mavericks, where he would play his entire career. However, though he had a ton of potential, he couldn’t quite string it all together right away.

Dirk’s first season did not go well. He was a star in Europe, but the NBA was an entirely different beast. He averaged a measly 8.2 points a game, 3.4 rebounds, and 1 assist. Not ideal for someone the Mavericks thought would turn their franchise around.

Everything began to change in Dirk’s second year. Rather than playing down to his opponents, he began to use his size to his advantage. Being seven feet tall was an incredible advantage that he just didn’t know how to properly utilize. Once he figured it out, everything changed.

In his second year, Dirk exploded. His stats went from mediocre to great. He averaged 17.5 points (the last time he would be below 20 for the next decade), 6.5 rebounds, and 2.5 assists.

His play would only improve over the next eleven seasons, culminating in two championship runs and a single championship win. The big man had the ability to mix it up down low on the block, but his frame also enabled him to shoot over just about anyone out at the wing.

He was unstoppable from pretty much anywhere on the court. That caused a lot of double teams, which then opened the floor for other players. Seeing a big with those abilities is nothing new now, but he played like no one else in the league. That made him truly great.

Looking at Dirk’s height, his scoring ability may not be too crazy. Even so, during the 2000’s he was a true unicorn who could not be stopped. The NBA is a much different league than it used to be, and Dirk is a perfect example of why the shift happened in the way it did.