How Many Rings Does Dirk Nowitzki Have? 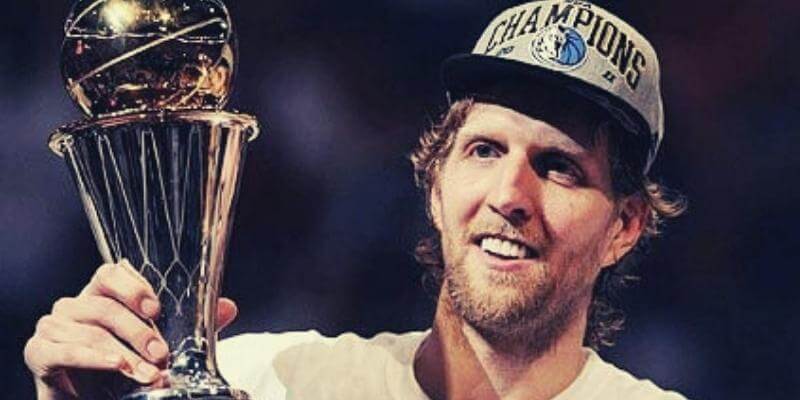 In the NBA, a championship can change an entire career. It can elevate a player to a new level, give them prestige they previously didn’t have, or, as was the case with Dirk Nowitzki, build them up into a perennial superstar.

The following sections dive into Nowitzki’s career, as well as his deep postseason runs, to give an in-depth look at how winning championships revitalizes players and cements them in history. Jewelry isn’t just the main goal, it’s the only one.

A Day One Star

Dirk came into the league during a different time. Centers didn’t shoot like he did, nor did they have the ability to dribble and score. He was a unique player who clearly stood out from the pack. Though he struggled a bit during his first year, he quickly came into his own.

His hype proved to be real, instantly turning the long last-place Mavericks team into a real contender. Paired up with other great players, he pushed ahead and made the playoffs numerous times during the early 2000’s. In just eight years, he reached the Finals.

Close, but No Cigar

The 2005-2006 season was an incredibly bittersweet one for the Mavericks. Dirk had created a dynamic offense, and his supporting cast was better than ever. They took down the Western Conference with ease and, for the first time, brought the Mavericks to the finals.

Unfortunately, the title was not meant to hang in Texas. The Miami Heat, led by the combined star power of Shaq and Dwyane Wade, won the championship in a tough fought six games series. That was as close Dirk would get to a ring for a long time.

After losing in the Finals, Dirk and the Mavericks went through numerous seasons of heartache. They won plenty of regular season games, but could never climb back to the Finals. They kept getting upset in the playoffs, including a loss to the eight place Warriors in 2009.

That led the perception around Nowitzki to change. Where he was once considered to be one of the best in the league, many soon considered him to be a paper tiger who couldn’t win when it mattered. Those voices only grew as each season went by.

Going into the late 2000’s, nobody took Dirk seriously anymore. He undoubtedly had a lot of talent, but the respect was largely gone. That all changed in 2010.

Moving into the new decade, Dirk had the weight of the world on his shoulders. Having failed to win a ring, he faced a ton of external pressure on a rapidly aging team. His window was closing, and everyone knew it.

However, he wasn’t done yet. Against all odds, the Mavericks stormed past the regular season and raced through the playoffs to make the Finals for the second time in team history.

Then, in one of the biggest upsets in NBA history, the Mavericks took down the highly favored Heat in six games. It was a revenge game for Nowitzki, and it helped push him from good to greatness.

He was no longer a glass cannon who couldn’t finish. He was a winner. That was the only ring he got during his career, but it was more than enough to prove his legacy.

Dirk has always been a superstar, but before getting his ring he didn’t have the respect of a hall of famer. Now, he’s widely touted as one of the best players ever. That shows the impact a single championship can have, and what it can mean for an individual.