What Does DNP Mean In Basketball 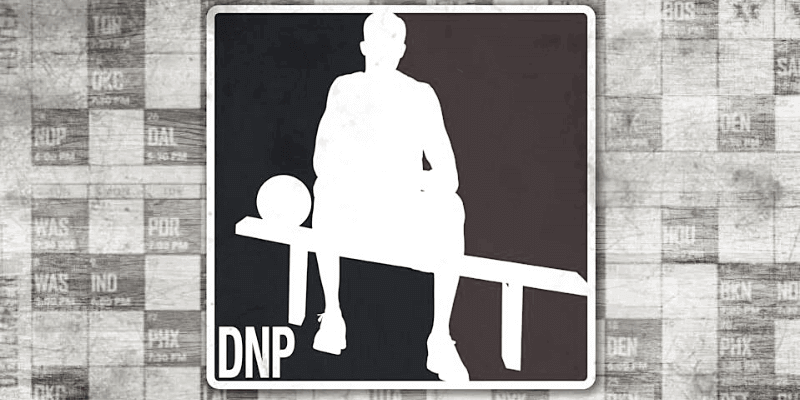 There is nothing worse, as a basketball player than getting a DNP in the box score.

For those who are unaware of the acronym, DNP, it stands for Did Not Play. There is no mystery to the term as it means exactly what it says: the player did not play during the game. The term is usually followed by “coach’s decision” which is another dagger to the player’s ego.

Many of you are scratching your heads about a few things. Younger fans may not know what a box score even is (or where to find one). Others are probably wondering “why do they even track this stat?”

These are valid questions, and we will answer them, and more, below!

What Is A Box Score?

The box score is where all of the stats from a particular game. You would check them out to see who won and look up player stats like points, assists, and rebounds. The DNP’s were also housed within the box scores.

Box scores were located in the newspaper and came out daily instead of in real time as the games happened. Us old sports fans remember waking up in the morning and sifting through the Sports page of the newspaper to see the box scores of our favorite college and NBA games.

As a Golden State Warriors fan from the ‘90s, a lot of their games’ box scores didn’t come in daily because their games were on the West coast. Weeks would go by where I couldn’t see their scores or stats.

Box scores are still located in newspapers today, but most fans head to sites like ESPN or nba.com for up to the second results. It is hard to believe that we used to have to wait as long as we did to get results.

There are several reasons a player would get a DNP. The first is quite simple: the coach decided not to play them. NBA teams can have up to 12 players on their roster, but they are only allowed to play 5 guys at a given time.

A lot of times, there either isn’t enough playing time to go around for 12 players. Sometimes the coach decided certain players either aren’t ready to play or aren’t a good matchup for the particular game.

There is a term in sports called “benchwarmer”. It refers to players on a team that rare get playing time. Anyone familiar with sports knows that not every player plays every game.

The “benchwarmers” – I use that term affectionately – are great teammates. They help in other ways, like improving team morale and mimicking another team’s plays while preparing for a game, but don’t factor into the coach’s gameplan.

Another DNP situation that comes up a lot is if a player does not play due to a minor injury. One requisite of a DNP classification is that the player has to be dressed for the game. Meaning if the player wore street clothes and sat on the bench while not playing, he would be ruled “out” instead of getting a DNP. Some players test their injuries out in pregame and dress in their uniform just in case they feel good enough to play.

The term Load Management is a fairly new one in basketball circles, but it does result in DNP’s from time to time. Load management is when players decide to take a night off to rest even though they aren’t injured. The NBA season is a long one, and teams are getting smarter about how to pace their best players to ensure they are ready to come playoff time.

The NBA doesn’t love load management for one significant reason: money. Let’s say the NBA schedule comes out and the Los Angeles Lakers have nationally televised games frequently. Die hard fans will probably watch, but what about those casual fans who only tune in to see the league’s biggest stars?

When ratings go down, so do advertising profits, and the NBA doesn’t like that. This trend has become such a problem over the last few years that the NBA had to act on it.

At the end of the day, the league doesn’t have a lot of leverage, and teams are getting smarter. If a player wants to sit and rest then they will find a way, giving them a DNP in the box score for that game.

Two-time champion and all-NBA player Kawhi Leonard is notorious for his mysterious load management DNP’s – they aren’t the only mysterious thing about Leonard’s career – and he doesn’t even really try to hide it.

The NBA star’s plan was simple: don’t play in back-to-back games to avoid injuring himself. It is hard to blame Kawhi for his decision.

He is a superstar with cache, he has been battling lower body injuries for years and will reportedly miss a big chunk of the upcoming NBA season due to a partially torn ACL.

For fans familiar with The Kalaw’s reputation, he marches to the beat of his own drum, so this type of decision isn’t new. Either way, Kawhi is one of the players who truly believe managing his playing time will help him play longer.

Honestly, with the amount of punishment these players take during the regular season, he isn’t wrong.

A DNP, in some cases, can be crucial to the game. In other cases, however, it affects nothing. If the player is a star and is out with an injury or for load management, then it could mean the difference between a win and a loss.

If the player usually resides at the end of a team’s bench and continues to rack up DNP’s all season, it doesn’t really matter. What does matter is that the term DNP is important to the game.

Have you ever gone to a game only to have your favorite player get a DNP? Let us know what you thought about it below in the comments!