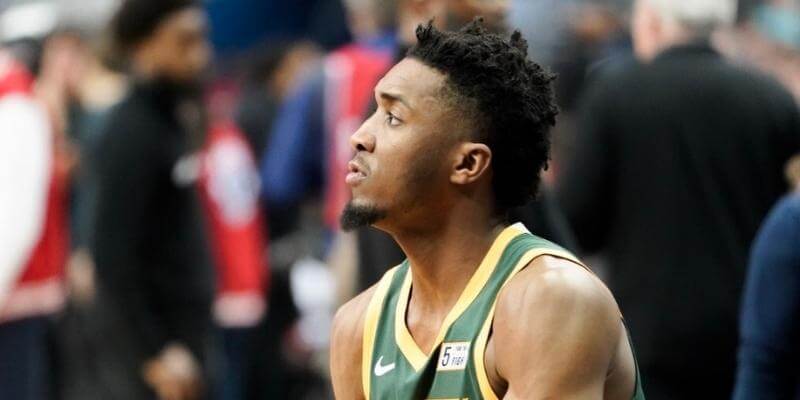 There are many aspects of an NBA player, but height and wingspan are two of the most important. They’re the only measurements that can’t change (or be taught) and they do a good job of suggesting athleticism. That’s especially true for smaller guards and wings.

Out of all the premier point guards in the NBA, very few are able to match how Donovan Mitchell plays. The below sections will go over why that is, and look at the several ways his unique dimensions help inform his unique style of play.

Mitchell is a great player. He’s put up solid numbers since signing with the Jazz, and continues to be a score-first point guard known for his hustle and strong defense. He has a high vertical, and plays with a quickness that almost nobody else can match.

What’s so impressive about his skill is that he only stands 6’1, a whole two inches below the NBA point guard average. That means, not only is he undersized compared to the regular NBA, but he’s also undersized for his position. That hasn’t slowed him down at all.

Rather than trying to be something he’s not, Mitchell relies on his quickness and high basketball IQ to run the Jazz offense. His ability to get to the rim, mixed with his inherent speed, have enabled him to continuously give opposing defenses fits. However, his long arms help as well.

Reaching Above His Height

There are several reasons Mitchell’s able to overcome his smaller height. Not only is he incredibly fast for his size, but his arms are some of the longest in all of the NBA.

His wingspan measures a staggering 6’10. Not only is that much, much longer than most players across the league, but it means his arms are nine inches longer than his body. That difference is the biggest across the entire NBA.

For reference, many players who have extremely long arms still don’t have a reach that can match Mitchell’s. Klay Thompson’s reach is 6’9, as is Marcus Smart’s and Eric Gordon.

To give further context, it’s important to remember that arms compared to height is even more important than any one length. While Mitchell is short compared to many modern point guards, he has the longest reach out of any of them.

The Importance of Being Long

Mitchell’s arms are a huge advantage that puts him in a league of his own. It helps him when defending taller players, and it’s a big reason why he’s so good at dribbling through traffic, going up for long-range shots, and flying for incredible dunks.

Even small plays, such as deflecting a pass or keeping the ball away from a press defender, get much easier when someone has long arms.

Height is critical in the NBA, but wingspan might be just as important. That’s because all NBA players are able to use their bodies in unique ways. They can get into their opponents, know how to twist in the air, and are able to start and stop extremely quickly.

Looking at that, size is undoubtedly an advantage. However, wingspan helps mitigate that. When a player has long arms they can reach up and around bigger players that they normally wouldn’t be able to defend or score on. That closes the gap, and it’s why Mitchell is so good.

Many NBA players have wide wingspans, but almost nobody’s arm-to-height ratio matches Donovan Mitchell. The guard may be on the small side in an ever growing league, but he can match up with bigger plays with ease. His long reach is the reason why.