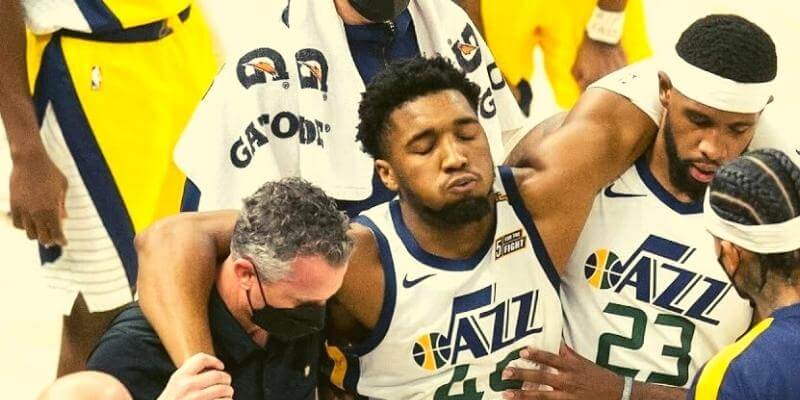 One of the biggest shifts the NBA has seen over the past twenty years is injury care. Players are more careful than ever, aren’t afraid to rest, and take their time with rehab. Despite that, basketball is a tough sport. Athletes still get hurt quite often. That includes Donovan Mitchell.

In this guide, I will analyze the guard’s injury history by looking at the ailments he’s faced over his short career and go over how they happened. It’s not just getting hurt that matters, it’s how a player bounces back.

Donovan Mitchell is a premier athlete. He’s the face of the Utah Jazz, and has consistently put up great stats every year he’s been in the NBA. He’s an exceptional shooter, athletic jumper, and all-around solid defender. Even so, most of his stats are only possible due to his health.

Where many superstars, especially ones that play like Mitchell, get hurt every now and then, he’s managed to consistently stay on the court each and every year. Part of that is due to sheer luck, and part of it is the result of knowing when to take a rest day.

He still has had his issues, but he’s been on the court more than most.

Mitchell has played five years in the NBA. During that time, he’s been incredibly consistent with staying on the court. Though he’s not a workhorse who’s going to go into every game regardless of the situation, he’s always been there when the Jazz needed him.

During his first three years in the league, Mitchell played in 79, 77, and 69 games. That’s pretty close to 82, with most of his breaks coming from carefulness and minor tweaks more than anything else.

He took a big hit in 2020, when he played in 53, but then bounced back to 67 games in 2021. Most of his time off the court is due to the fact that he can’t quite keep all of his body healthy. He’s a strong player who relies on athleticism to play well. That always comes with risks.

As with any physical player, Mitchell is someone who goes through a lot of different issues. His ankles are the weakest part of his body, but they’re far from the only problem he’s had. The guard has hurt his left ankle, hamstring, toe, rib, back, and head throughout his career.

Most of the time, those issues only take him out for a game or two. When they add up over the course of a season, however, it all leads to ten or so missed games. That’s why Mitchell tends to sit out between ten and fifteen games each and every season.

The only part of his body that he’s hurt a lot is his ankle. In fact, it caused his biggest injury back in the 2020 season. He came down on it wrong during a game in April, which took him out for the last sixteen games of that year.

Still, he bounced back in the playoffs and was present for every contest. He re-aggravated in the playoffs, but pushed through and played on it during the series against the Clippers.

Injuries happen, but players now do a great job of mitigating them when possible. Unfortunately, as Mitchell showed, that’s not always enough. He’s had a great career, but is still trying to work through smaller issues. If he can do that, he’ll continue to dominate the NBA for years to come.