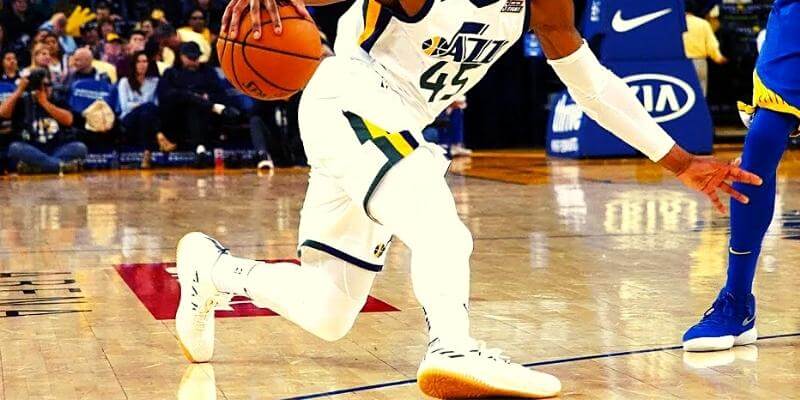 NBA players tend to have large frames, which then means they have big feet. Shoe size is not necessarily indicative of skill, but it’s certainly interesting to look at. For Donovan Mitchell, it shows his innate athletic ability.

This article looks at the shoe size Mitchell wears (which is size 17 US, or size 50 Europe) and then compares that against both the way he plays and other athletes in the league. That breakdown will show how such measurements matter and why team’s care about them when evaluating talent.

A Few Feet Above

All NBA players have large frames compared to the general public. Even point guards stand over six feet tall. Mitchell is one such example of someone who’s small based on league standards, but much bigger than most regular people.

The Jazz guard measures 6’1 from head to toe. That’s two inches below the average NBA point guard, and well below most other positions. Even so, his feet are some of the biggest across the entire league. That includes power forwards and centers.

He wears an astonishing size 17 sneaker. That’s incredibly large. So large, in fact, that it puts him in the top one percent of all NBA players when comparing it to his body. He’s the only guard with that shoe size, and there isn’t any other point who even comes close.

To accurately analyze Mitchell’s shoe size, it’s important to compare it to the rest of the league. As mentioned, his feet are big for every position. While many taller players have size fifteen or sixteen sneakers, size 17 puts him into an entirely different class.

Lebron wears a size fifteen, Jayson Tatum rocks a fourteen, and Curry a 13. That shows how much bigger Mitchell is when compared to everyone else at or around his position.

Continuing on, his feet are larger than Nikola Jokic (16), and the same size as Joel Embiid (17) despite the fact that both big men stand almost a foot taller than him. That’s an incredible difference, and gives context for the uniqueness of Mitchel’’s shoes.

The average sneaker size across the league is 14.8. That number takes big men and guards into account, meaning that Mitchell is more than two sizes above the average despite being one of the shortest players around. That’s almost hard to imagine.

Having big feet doesn’t carry the same athletic advantages that being tall or exceptionally big do. However, there are still certain benefits that cannot be ignored. That’s especially true for a smaller point guard like Mitchell.

Large feet create a wider, sturdy base for any player. Though that can make big men more injury prone, big feet on a guard generates a solid base that they can jump or leap from. In that way, bigger shoes add explosiveness to an athlete’s game.

That’s especially relevant for Mitchell, as so much of the way he plays is based on quick moves to the rim. Being able to get up into the air just a bit faster than his opponents is often the difference between a thrilling basket or a blocked shot.

His feet are not the only reason for that skill, but they are a part of the entire package. He simply wouldn’t be the same player, nor would he have likely developed in the same way, if he didn’t have such big shoes.

Shoe size does not directly affect a player’s skill, but it’s typically indicative of general athleticism. That’s certainly the case with Mitchell, who has some of the biggest shoe-to-body ratio in the NBA. That disparity isn’t the reason for his skill, but it does reflect his gifts.