What is a Double Dribble in Basketball? 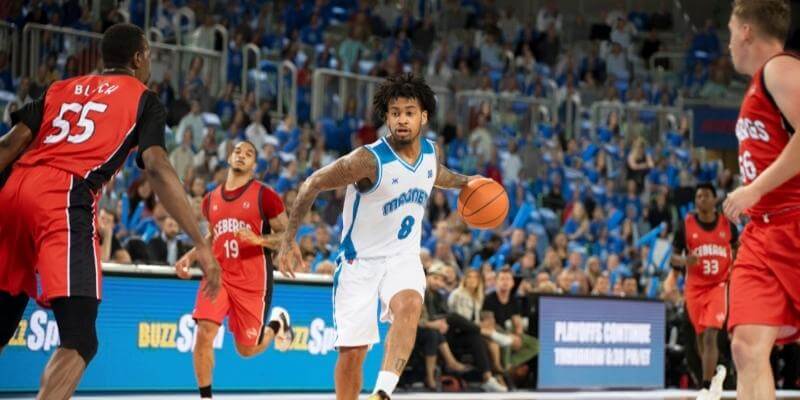 Throughout this guide, I will take a look at double dribbling. Not only will I cover exactly what it is, but I will also break down why it occurs and what makes it an illegal move. Read on to learn more.

A double dribble, also known as an illegal dribble or dribbling violation, is an infringement in basketball that can occur in one of two ways. Either the player dribbling the ball stops dribbling and then starts to dribble again, or a player dribbles the ball with two hands instead of one.

If either of those scenarios occur, the team on offense has to turn the ball over to the defense. Unlike fouls, a double dribble never results in a jump ball, throw-in, or free throw. It always leads to a change of possession, with the defense taking over.

Double dribbling is an important rule because it allows basketball as a game to function. If every player could stop dribbling and then restart, it wouldn’t be able to properly play defense. That’s because it would also give a huge advantage to offenses in an already offense-minded sport.

In basketball, defense is about forcing players into tight corners or making the offense pick up the ball at inopportune times. Neither of those would be possible if there were no illegal dribbling violations.

Not being able to touch the ball with both hands also matters because it keeps the person dribbling honest. Being able to essentially pick the ball up while on the move would create several issues that would change the way the game is played.

The Rules Behind Illegal Dribbling

In the NBA, a dribble officially ends when a player either holds the ball after a dribble or if they simultaneously touch the ball with both hands.

If they touch the ball more than once while dribbling, that ends it as well. That’s the same rule used in both FIBA and the NCAA.

The only way a player with the ball can dribble again is if they shoot and get a rebound, the ball gets touched by the opponent (such as knocking it out of their hands), or if they try to pass or fumble the ball and it’s touched by any other player (including their teammate).

If ball possession is ever lost in an honest way, and the dribbler loses possession for more than a second, they are then able to get the ball and start dribbling again without the risk of getting a violation.

Double dribbling is one of three different dribbling violations within the game of basketball. Each move is considered illegal and, like double dribbling, results in an automatic turnover rather than free throws or toss-ins.

The first such violation is known as a palm, which is the rarest of the three. That violation occurs when a player, rather than bouncing the ball back down onto the court, turns the ball over in their hand while dribbling. That causes a noticeable pause in their movement around the court.

The other violation is traveling. Also known as walking, that occurs when a player picks up the ball and then takes steps or moves their pivot foot. Anytime a player runs or walks without dribbling it’s a traveling violation unless they’re actively moving towards the hoop.

Players can pick up the ball and still move if they are driving towards the basket. This move, known as the “two step rule,” allows any offensive player to make two steps while running at the basket. If they take any more than that, it’s considered a travel.

Double dribbling is not something you’ll only see called every now and then, but it’s a common violation that’s a necessary and important part of the game. It’s a critical rule that helps stop the offense from freely moving around the court, and it’s helped build basketball as we know it.

Dribbling violations are in place for a reason. Though they only happen a few times a game (if that) they help define the larger rules of the sport. When playing, always be sure to watch out for them and do your best to keep your dribble alive.