How Much do European Basketball Players Make? 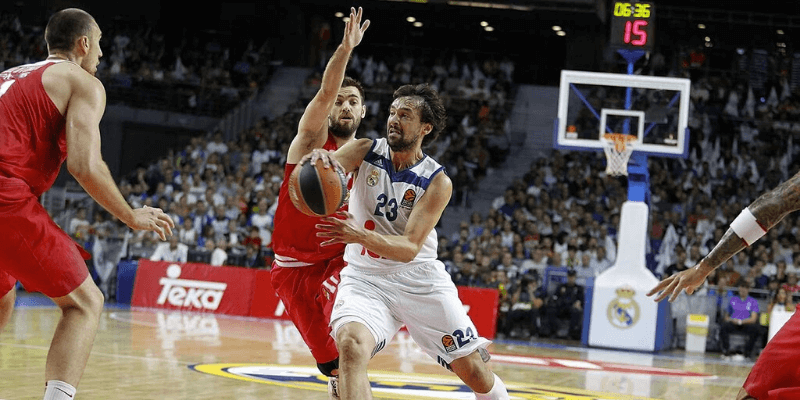 One of the major controversies in professional sports today is related to the salaries professional basketball players make. According to Basketball Reference, there were 11 players in the NBA who were making a minimum of $30 million last season and Golden State Warriors point guard Stephen Curry topped the list with a whopping $37.5 million. That doesn’t even include extra sources of income like signing bonuses and endorsements.

As such, no matter what country you come from, the National Basketball Association (NBA) is a great place to be if you’re one of the world’s best. However, if you are simply just looking for a decent wage and an opportunity to play, there are many European leagues that are available to you.

It should be noted that 201 players in the NBA made more money this past season than the highest-paid player in a European professional basketball league in 2019-2020. Former Chicago Bulls power forward Nikola Mirotic of FC Barcelona, who is set to make $5.4 million in 2019-20 (according to eurohoops.net), would have the 202nd highest salary if he was playing in the NBA.

There were 64 European players from 22 European nations that began the season on NBA rosters in 2018-19 according to nba.com, and they made an average salary of $8.1 million. Of those 64 Europeans playing at the highest level of basketball in the United States, 31 earned more in 2018-19 than Mirotic is set to earn this upcoming season in Spain.

According to Bleacher Report, Galinari was traded from the Los Angeles Clippers to the Oklahoma City Thunder on July 10, 2019 in the Paul George blockbuster. The native of Sant’Angelo Lodigiano, Italy will be joining his fourth NBA team as he has also been with the New York Knicks and Denver Nuggets. This past season with the Clippers, Galinari made just under $22 million, and averaged 19.8 points per game and 6.1 rebounds per game. This season with the Thunder, Galinari will make $22.6 million before becoming an unrestricted free agent.

Another player who calls France home, Batum returned to play small forward with the Charlotte Hornets in 2018-19 after player shooting guard the two prior seasons. He averaged 9.3 points per game and 5.2 rebounds per game with Charlotte in 2018-19. Batum made $24 million in 2018-19, and is set to make $25.6 million on 2019-20 and $27.1 million in 2020-21 as a player option. He’s entering his fifth season in Charlotte, but played his first seven NBA seasons with the Portland Trail Blazers.

The 34 year-old veteran was part of a Toronto Raptors squad that captured the attention of Canada this past spring when they won their first NBA championship in franchise history. After being traded from the Memphis Grizzlies to the Raptors on February 7, 2019, Gasol was a key component of the Raptors magical playoff run. He averaged 9.4 points per game and 6.4 rebounds per game in 24 postseason contests. Gasol made $24.1 million with the Grizzlies/Raptors in 2018-19 and is set to earn $25.6 million with the Raptors in 2019-20.

A Great Way to Earn a Living

There is no doubt that basketball is a global sport where superstars can be found on every continent. However, the best players, in Europe or otherwise, find themselves in the NBA. As a result, the 64 European players in the NBA at the moment are paid really well too.

The following table breaks down all of those players and shows what their salaries were at the start of the 2018-19 season. 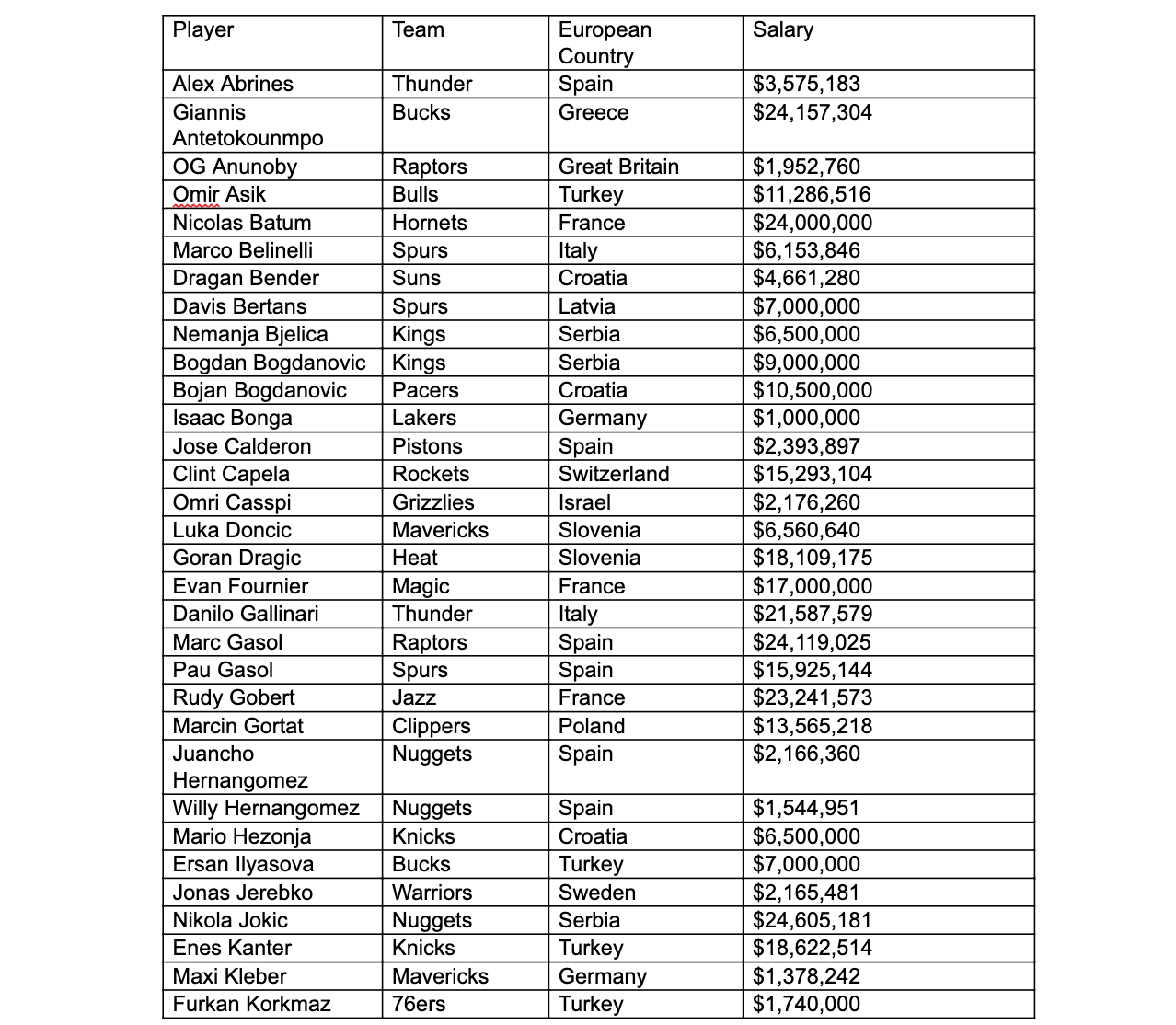 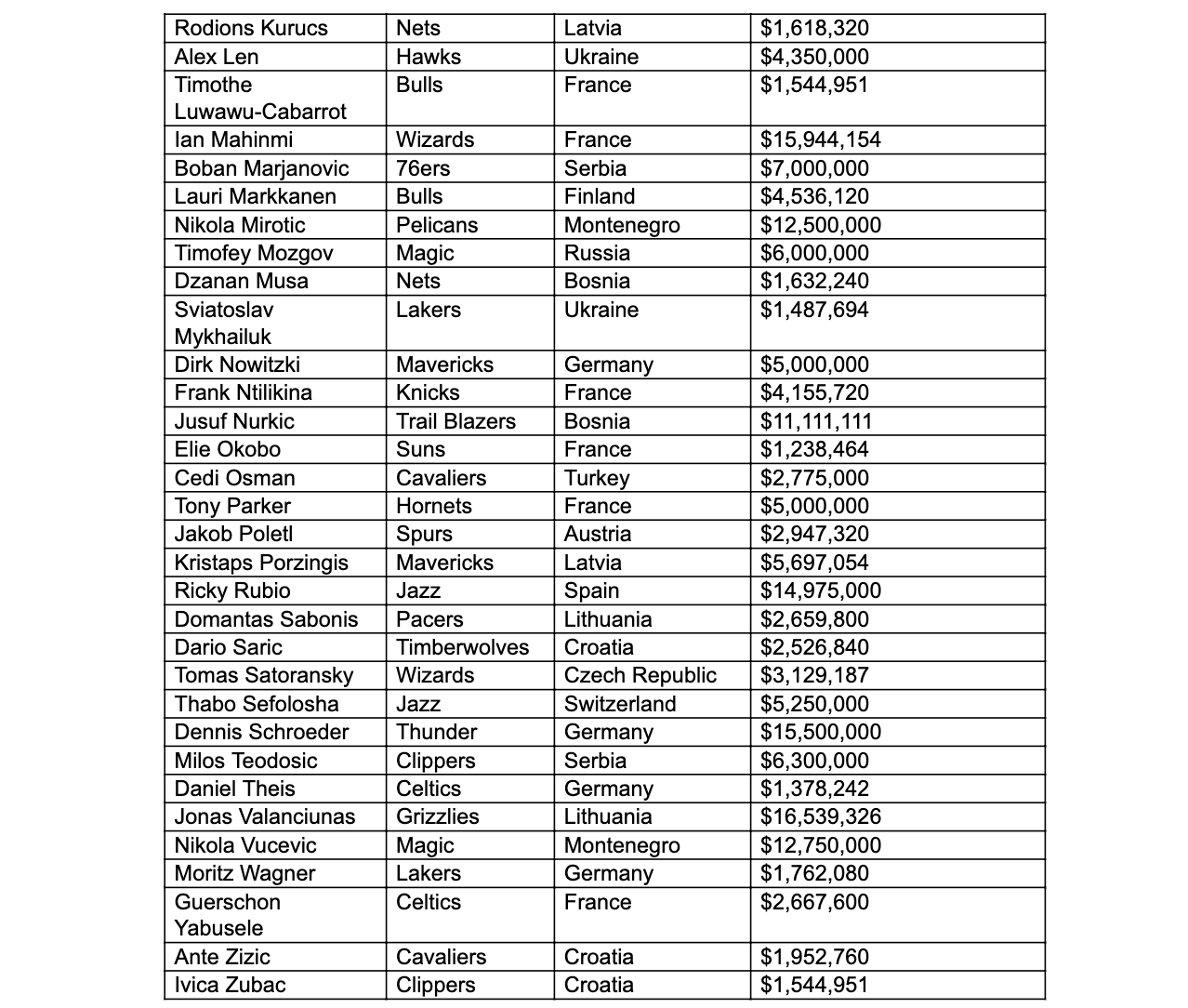