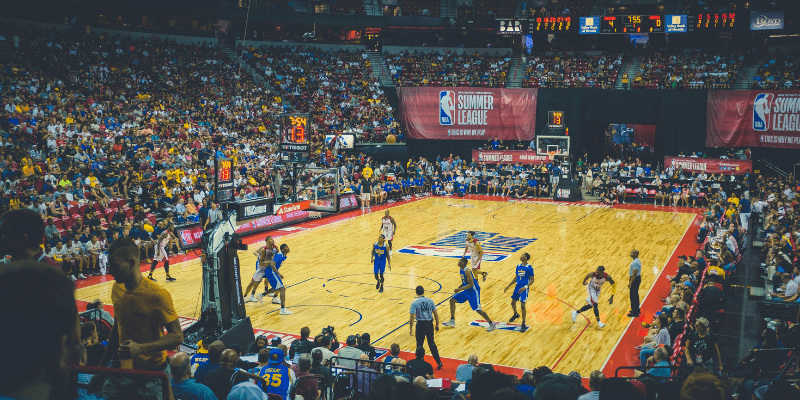 In team sports such as basketball, it is much easier for coaches and players to either call out only each other’s last names, or to give the players nicknames. There have been some hilarious ones over the years, as well as some that fit perfectly.

Let’s take a look at some of the most famous NBA player nicknames, and reminisce on the NBA of old, and the fun times that were had.

Michael Jordan had the ability to not only dunk with ferocity, but to seemingly float, as if to defy gravity. The “Air” nickname fits him perfectly, given the amount of time he actually spent floating through it in his NBA career. Most kids had posters of Michael Jordan on their wall in the 90s, and they were almost all pictures of him flying through the air, ready for his next monster jam.

You know your nickname will never go away when people just completely stop using your real first name. The Magic nickname stuck so hard, that there is a good possibility that most people simply believe that is his birth name. And make no mistake about it, Johnson was certainly magic on the court, with his passing wizardry and ability to take it to the hole and score.

Never has the NBA seen a more graceful big man than Hakeem Olajuwon. His graceful movements and fancy footwork in the post garnered him the nickname The Dream, and it was oh-so-fitting. He could work any big man in the game down on the block, and very few could hang with him when he started giving them the moves.

A ferocious defender, Gary Payton garnered “The Glove” nickname for his tight defensive skills. He could stay with other guards step for step like no other player in the history of the league. He struck fear in the hearts of opposing point guards, because they knew they couldn’t get away. The Glove fits here, and it is a fantastic nickname for one of the greatest point guards ever.

Wilt Chamberlain towered over players in his era, thus the “Wilt the Stilt” nickname made tons of sense. Want to know exactly how much bigger he was? The guy scored 100 points in a single game, simply because no one could contest his shot. He is one of the greatest, and most dominant players ever, and has a solid nickname to go with his legacy.

When Tim Duncan played the game, you didn’t have to worry about him making stupid mistakes or trying to be flashy. He did everything by the book, garnering him the nickname “The Big Fundamental.” From the perfect post moves to that mid-range bank shot, he knew the odds every time the ball was in his hands.

In the history of the game, if I were concocting a team and had to draw up a play to win a game with a buzzer-beater, I would let Paul Pierce take the shot. He never shied away from the spotlight, and lived for the heart-pounding moments. Even later in his long and successful career, Pierce wanted the ball in his hands in crucial moments. He really was “The Truth.”

A player that could have been a fantastic big man for years upon years sadly had his career cut short by injury. However, this small town country boy garnered the nickname “Big Country” which is very fitting due to his mammoth size. Bryant is 7 feet tall, making him one of the tallest players in the NBA during his time in the league. His is a story of what might have been, but his nickname will last forever.

One of the most loved NBA players in history, Darryl Dawkins was an electric dunker in his playing days. That garnered him the nickname “Chocolate Thunder,” because he could bring down the house at any moment with a big dunk. Arguably one of the most underrated players in NBA history, ask anyone who played against Dawkins and they will let you know just how great he was.

George Gervin’s “Iceman” nickname is said to have a double meaning. First, he was always cool and collected while playing the game. The other is that it is said he could play an entire game without sweating. Regardless of where it came from, it is definitely one of the greatest NBA nicknames of all time.

Never has the NBA seen a more smooth high flyer than Clyde Drexler. He had the same kind of gift as Michael Jordan where he could seemingly glide through the air, defying gravity. His game was more than just dunks, but his dunks are definitely what he will be remembered for. That and his awesome nickname.

Allen Iverson was small, but he sure talked a big game. Having to overcome his size disadvantage, he seemingly had “The Answer” to any obstacle that was in his way. Both on and off the court, Iverson overcame adversity time and time again. His perseverance as a player and a person is commendable. Always the underdog, he overachieved his entire NBA career.

If there was ever a perfect nickname for a player, it would be “The Admiral” for David Robinson. A graduate of the United States Naval Academy, David Robinson chose to serve his country over his professional career, which is why he is so well respected amongst his peers. A fine and upstanding citizen, Robinson was a dominant force and multiple time All-Star.

It is only fitting that a Russian player has the nickname AK-47. It is even more fitting that his initials are actually AK and he wore the number 47. It is like a match made in Russian heaven. He was a dominant player with a dominant sounding nickname to match, so his place on the list of greatest nicknames is cemented in NBA history.

From one Jazz player to the next, Karl Malone is one of the most prolific scorers in the history of the NBA. “The Mailman” used to score in bunches, thanks to some amazing passes from his longtime teammate John Stockton. He was extremely efficient at delivering the mail, so to speak, putting up 36,928 points in his career which is second only to Kareem Abdul-Jabbar.

Robert Horry will not be remembered for his amazing stats or number of All-Star appearances (he never made the team), but what he was extremely good at was hitting important game-winning shots. This earned him the infamous nickname of “Big Shot Bob,” and is also a major reason he was a part of an astonishing 7 NBA championship teams.

Kemp was one of the most physically dominating players in the NBA during his career. Just check out a mixtape of his dunks and you will see some ferocious plays that are certainly worthy of his nickname “Reign Man.” He was donned “The Reign Man” by a Supersonics announcer, due to his impressive ability to “reign” over his opponent. Very few people could physically dominate their defender the way Kemp could, thus the name stuck and will be remembered by the remaining Sonics fans out there.

No list of NBA nicknames would be complete without “Dr. J” Julius Erving. He was an enigma, with the ability to dribble, drive, and score with such ease that he made the game look easy. There are very few players who could play the game as totally and completely as Erving. He was a player that was able to take over a game whenever he wanted, and there was nothing the other team could do once he turned it on.

Black Mamba snakes are agile and deadly. This was what attracted Kobe to the name, and it is definitely fitting. No player since Michael Jordan has struck fear in the heart of an opposing team with the game on the line like Kobe. Bryant says he got the name seeing the deadly snake on the movie Kill Bill, and decided to make his game just as deadly as the snake’s venom. Now that is a killer nickname.

Probably the most fitting name on this entire list. Lebron James was dubbed “King James” all the way back in high school when he was lauded as the next Michael Jordan and his path to reigning in the NBA was clear. He has lived up to the high expectations of this nickname, winning multiple NBA championships and MVP trophies throughout his career.

There have been plenty of nicknames throughout NBA history that are great, but the 20 we listed above are some of the best of all time. If we would have listed them all it would have taken a lifetime just to write this article.

Did we leave any obvious choices out? Would you replace one of these with someone else? Let us know in the comments below!